Is West Bengal facing another pandemic? 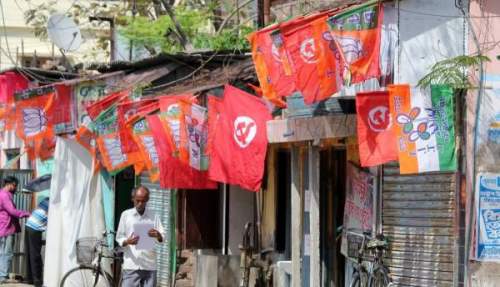 When the whole country is suffering from the COVID-19 pandemic, another pandemic is going on in one part of the country because of recent state elections. It is called a "Violence pandemic". A pandemic has been in operation in West Bengal for many years, which has killed so many people. Sometimes in the name of revolution, sometimes in the name of political enmity, sometimes in the name of communal hatred, there are so many variants of this virus called violence. The nature of violence may have changed through the decades, but political violence continued to be a powerful tool to maintain political power over the state, and Mamata Banerjee proved this.

It is not that political violence is happening in Bengal for the first time. It has always been a powerful tool to establish political power. But there is no doubt that it was one of the prominent issues in the 2019 general elections in West Bengal and in the 2021 state election campaign. Maybe because BJP is a national party, and it has many supporters across the country to talk about it or because the violence is increasing year after year. This thing is proved when the Bharatiya Janata Party (BJP) has invited families of over 50 party workers killed in Bengal poll violence to the swearing-in ceremony of PM Narendra Modi and when Amit Shah asserts the importance of West Bengal's 18 seat victory in his first speech after winning the election by saying "Bengal mein" several times. He was trying to tell that violence will remain the most prominent issue even in the next election.

However, the BJP has not been able to win this election after having so many opportunities and resources, but now it is a force in Bengal, and Mamata Banerjee herself cannot deny this, and that's the point which haunts Mamata Banerjee, and it's party cadre. They feel that now someone has come to confront them, that is why they want to eliminate not only the BJP but the entire opposition or after such a big victory, now Mamata Banerjee and their party members have started thinking that this is the peak of her career. They feel that now the slope will come after this, which will take them and their strength down like it did with the Left after the 2006 elections.

What Mamata did in this election, hardly anyone would have thought, other than Prashant Kishore. She won with more seats than before, even when the people sitting in Delhi were saying that his government is going to go. She hit a hat-trick of victory in West Bengal state elections after facing so much anti-incumbency, polarization and caste divisions. Many people in the country see their victory as a victory of liberalism and victory of the Anti-BJP faction in the country, but now what she and her party members are doing is spoiling their party's image and making their victory a "mockery of democracy". The word "mobocracy", which signifies the death of democracy due to the increasing use of mob violence in a democracy that Mamata used to tease Uttar Pradesh and Bihar, is happening today in her state and that too from the hands of her own people.

BJP has made serious allegations against Trinamool congress workers and supporters. The violence took place in many places, including Odishapara, Cooch Behar, Samaspur, Purba Bardhaman, while the BJP office in Arambagh was set on fire whose video is going viral on social media. BJP leaders have alleged that in South 24 Parganas, the houses of those who voted for the BJP and the BJP workers who worked for the party in the elections have been demolished. The same news came from Nandigram, where Shuvendu Adhikari's car was attacked because he defeated Mamata Banerjee in recent elections from Nandigram.

The BJP released a list of 24 different incidents in Bengal in which its activists were attacked. The BJP also released the names of the activists who were killed. These include Shova Rani Mondal (Jagaddal, North 24 Parganas), Uttam Ghosh (Ranaghat, Nadia), Abhijit Sarkar (Beliaghat, Kolkata), Horome Adhikari (Sonarpur South, South 24 Parganas), Momik Moitra (Sitalkuchi, Cooch Behar) and Gaurav Sarkar ( Bolpur, Birbhum). BJP also claims that more than 7 BJP members and supporters have died during this violence.

The National Commission for Women has expressed concern over the alleged beating up of some women in Nandigram, West Bengal. On Tuesday, the Commission asked the state police to take immediate action in this case and arrest the culprits and investigate them in a time-bound manner. A team led by the Chairman of the Commission, Rekha Sharma, will soon visit West Bengal to investigate the matter. The Women's Commission said that several posts made on Twitter showed that some goons beat up women after the elections in Nandigram. The Commission is concerned about this incident and has taken serious note of it as it raises questions about women's safety in the state.

Even Congress and left too accused TMC of alleged attacks on their cadres and for practising post-poll political violence to suppress the voice of opposition.

"The post-poll violence that has been unleashed by TMC on Congress workers is unacceptable. Even women and children are not spared," -Jitin Prasada from Congress said to India today.

CPM chief Sitaram Yechury from Left said, "the aggression would be resisted and rebuffed".

Meanwhile, the Trinamool Congress claimed that three of its supporters were killed by the BJP in West Bengal's Purba Bardhaman district.

Trinamool Congress and Mamata Banerjee have to understand that they cannot get people's votes through violence, nor can it intimidate the cadre of a gigantic party like BJP. This will only make their image as goon's party and give BJP a purport to play its politics. It may not be like Mamta wanted this violence, but there is no doubt that the TMC cadre has a lot of hand in this violence. There is no doubt that the police is working at the behest of the local TMC leaders, and the media there also supports TMC for a long time. Abhijit Sarkar, a 35-year-old BJP supporter, was beaten to death hours after the TMC soared ahead of the BJP in the May 2 counting. Abhijit's mother, Madhabi, 62, and brother Biswajit, 40, were also beaten up while their house was ransacked by unidentified men. The family said police were present but didn't stop the men.

"I said my son will never support the BJP again. But they did not listen. They kept on beating him. All I could do was watch," said Madhabi to Indian express

His brother, Biswajit, claimed the family had long faced threats from the TMC. The brothers make clay idols and sell eggs for a living.

"During the campaign we were threatened by the TMC. Around 1:30 pm on Sunday, some miscreants first lobbed crude bombs near our home, then ransacked the party office. Police were there but did nothing," Biswajit told Indian Express.

Today, TMC stands where the Left was standing after the 2006 victory and Congress standing the 1972 victory. TMC and its leaders show egoistic ignorance towards violence in the same way as the Left had shown towards TMC after 2006 and Congress had shown towards the left cadre after 1972. Mamata Banerjee and their people have to understand that they cannot withdraw from their responsibility by saying that everything is a part of propaganda. Maybe, some things are propagated as a part of propaganda, but everything is not propaganda. Violence is a reality in Bengal's political culture, and this violence pandemic can't be stopped overnight. After the victory of congress in1972, post-poll violence happens, then the left increases its influence, and after the triumph of the Left in 2006, violence in Singhur and Nandigram happens. Mamata Banerjee's influence grows because of that incident. Will history repeats itself, or Mamata will understand her mistake? Mamata wins big same as Left won big in 2006, violence happens. Will this chronology go on as before? Could it be the Nandigram moment for BJP? This may or may not happen, but one thing is bound to happen, the ordinary person will suffer.

"When the end draws near,

the first thing a man loses is his good sense."