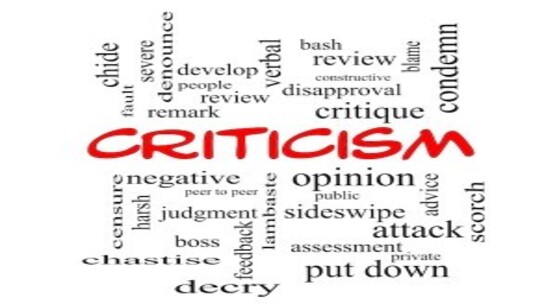 Here is a question that may arise: what is criticism? According to the dictionary - it is a remark of the merits and demerits of someone or something, based on the work done. Some people have a misconception that reproval only means negative analytical judgments. There are various types of criticism. Negative criticism signifies an expression of disapproval, whereas positive criticism draws attention to the positive aspects of something or someone. On the other hand, Constructive criticism is a helpful remark that provides suggestions on how one can make positive improvements.

As a democratic nation, India needs 'criticisms' to upgrade its living standards. For the reformation of a country like India, critics must be summoned positively. Not only critics, as the citizens of India, the ordinary people also have the right to criticize the government. But often, they ended up performing unnecessary criticism. These futile discussions intensify the pressure on the general public. Nowadays, social media, which gives the power to the public to dispense their views and must be handled with some consciousness, adds fuel to those unnecessary judgments. People often make offensive comments on these social platforms.

Being the citizens of a nation that supports egalitarian views, people must focus on constructive criticism instead of harmful and unnecessary remarks. Constructive criticism encourages government which helps to revamp the country as a whole. Unnecessary reproval exasperates the general public against the government, whereas constructive criticism pushes people further to think with positive attitudes together. According to Frank A. Clark, an 18th-century American lawyer, and politician, “Criticism, [...] should be gentle enough to nourish a man’s growth without destroying his roots.” So, to make democracy powerful, the government needs more beneficial remarks.

Now another question may arise, then what about us, should the government be blindly supported? First of all, let me explain what is Blind Faith. This notion denotes when people refuse to question their preconceived notions or beliefs and impulsively accept all. Blind support can be threatening in the growth of someone or even of a country. Dehumanizing, the general public, blind obedience makes people behave awfully. Blind believers are always reluctant to hear any remarks about those on whom they have placed their trust. People should be impartial and should analyse both sides of the coin.

Being citizens of India, people should not involve themselves in believing in authority blindly. Everything has its pros and cons. So, if some decisions of the government seem disagreeable, one may remark on that. Although, it should be in a constructive manner pointing out the loopholes in the policy, of the government. Such disapproval might be harsh to some but, its consequences must be taken, into account. In extreme cases, if someone disrupts public order or overthrows the government aggressively in an illegal way, section 124A can be invoked but not for expressing general thoughts.

It's essential to maintain a nation's integrity, but that doesn't mean it should be used, to curb the citizens' freedom of speech. As a part of a vibrant democracy, constructive criticism should be there instead of blind faith. If there are some restrictions on one's speech, it must be scrutinized. This section 124A was brought in by the Britishers long ago, to suppress the voice of the Indians. They (British Government) didn't want any Indians to stand against them. But it's been a long time since the Britishers left India. And now, the constitution allows Indians to deliver constructive comments which may push India towards prosperity.

Earlier this month India has witnessed an incident with Vinod Dua. A veteran journalist, who remarked in March 2020, on Modi government handling the prevailing Covid situation loosely. And said the Pulwama terror attack and Balakot airstrike was nothing else but just "politicized"; also commented on substandard testing facilities at that time. After his comment, a BJP leader lodged an FIR against Dua. Though dismissing the sedition, the Supreme Court retorts - "A citizen has a right to criticize or comment upon the measures undertaken by the Government.'' "[...] as a journalist he was touching upon issues of great concern so that adequate attention, could be bestowed on the prevailing problems ", SC added.

India is a country where citizens with different ideologies reside. Some of them are with the government some are not. People should respect each other's views. Nowadays, people divide themselves into two groups - one party favours the government, and the other opposes it. Those in favour are sometimes blindly following the government and the opponent group is always ready to condemn the "Sarkar". In both cases, people end up doing unnecessary praise or unfair criticism, which restrain the growth of the nation. People shouldn't be biased but focus on positive feedback.

Currently, social media platforms are playing a crucial role. It can either be constructive or destructive. It allows everyone to express their views. But that doesn't mean that people will say whatever they want. Citizens should use those social platforms with intensive care. Remember one's view matters a lot as it can impact others. People must learn to appreciate the 'good' and at the same time highlight the drawbacks of authority. It is something that keeps the vibrancy of democracy alive. There are various examples in the past where positive criticism impacts the maturation of society and the government.

Citizens and the authority need to balance between section 124A and freedom of speech and expression. People should be extra careful in their every remark so that these two aren't violated or misused. While disappointments with the government may cause the rise of populist nations, having blind support for the government may ruin the nation. Hitherto constructive criticism is always, welcomed. According to Norman Vincent Peale, American minister and the author of The Power of Positive Thinking, "The trouble with most of us is that we would rather be ruined by praise than saved by criticism.”