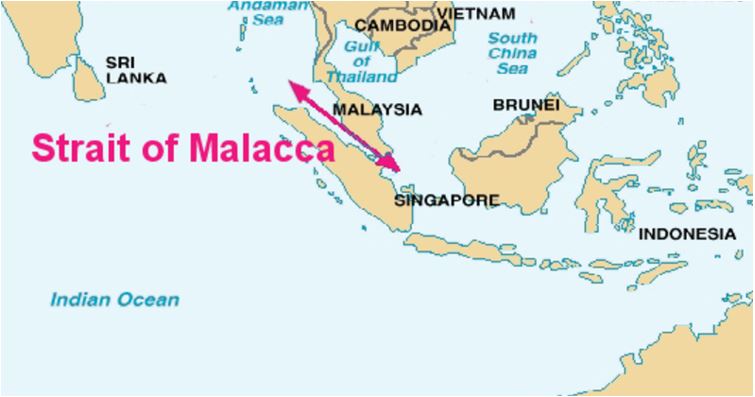 "The Strait of Malacca is a strategic waterway between Indonesia and Malaysia through which the majority of Chinese imports pass. This narrow waterway also makes the perfect chokepoint from the perspective of India. That's why, it is always China's achilles heel."

Ever since the Galwan Valley incident happened last year, anti-China sentiment has started to grow in India. Although it was already present there due to the Wuhan virus But this incident broke the patience of every Indian. Everyone who is in government or who is not in government is looking for ways to teach a lesson to China. Everyone had their suggestions like declaring Tibet free or recognizing Taiwan, or supporting Hong Kong protesters because all these matters are weak points of China where they overreact for their so-called sovereignty. But there were very few people whose focus would have been on our strength. Our main strength against China is the Strait of Malacca. That's why it is China's Achilles heel. India has naval capabilities to choke the Malacca strait, which joins the Indian Ocean to the Pacific ocean. If this happens, Chinese ships will have to choose a longer route, and it will not be possible for them to handle the economic burden that arises at that time. According to strategic experts, it would be a major setback for China if this route closes. The cost of China's maritime traffic will increase by $ 6.40 million only if it is closed for a week. According to another estimate, China will have to choose a long sea route if this route closes. This could cost China an additional $ 84 billion to $ 200 billion in one year. The vast majority of China's oil imports, from the Persian Gulf, Venezuela and Angola, pass by this route. That's why this route played a crucial role in India-China relations.

What is China doing to avoid it?

China is doing a lot to avoid dangers from India in the Strait of Malacca.

As part of the China Pakistan Economic Corridor (CPEC), they developed the port in Gwadar to ship goods unloaded overland to China. On 8th June, the Pakistani government approved a $7.2 billion upgrade to connect Gwadar to Kashgar, China, through a railway route. The port is not yet operating at capacity, but the direction seems clear. But no matter how much money China invests on this route, it will not be entirely trustworthy for China. The main reason for this is Gwadar port lies in the Baluchistan province of Pakistan, which is affected by militancy and separatist movements and the second main reason is that this route passes through Pakistan Occupied Jammu and Kashmir, a region filled with uncertainties. Even China and Pakistan cannot know when India will do something there. The third main reason is Pakistan is a third world country, and many countries look at Pakistan as a terror-financing state. Political and economic instability are also the reasons why the route from Pakistan is not trustworthy.

China has been looking for a new route for years so that it can avoid maritime traffic of the Strait of Malacca. They are trying to create a new sea trade route from Thailand. Its ambitious Project Belt and Road Initiative intends to connect Thailand with the Kra Isthmus Canal, also known as the Thai Canal. It is said to cost about $50 billion. However, once a friend of China, Thailand has recently refused the project because they think that because of this canal, Thailand will divide into two parts in the North and South part and the south part is already affected by militancy and separatist movements. Some people also say that the Thailand government had taken this decision because they don't want to deteriorate relations with India and America.

China has invested a lot in this region to increase its presence, like they invest $10.5 billion in Malacca province of Malaysia. But according to reports, Malaysia's Malaccan state government cancelled the contract awarded to a private company to construct the Malacca Gateway project. This private company had made Chinese companies a partner in it. Among them, there was a Chinese state-run company. Under this project, three artificial islands were to be built in the Malacca Strait. Apart from this, a port was also to be made. There was a fierce debate in Malaysia about this project for a long time because some leaders, Mahathir Mohammad, has been an outspoken opponent of China's growing influence in his country. A new city was to be built on the 546-hectare coastline under the Malacca Gateway Project. Large malls, tourist spots, theme parks, etc., were to be built in this city. A Malaysian company, KAJ, claims that the project was not part of China's ambitious Belt and Road Initiative project. But China's former transport minister Yang Chuangtang had said that the project would support the Belt and Road Initiative in Malacca. According to a report published on the Nikkei Asia website, the KAJ company from the starting did not clearly state about China's stake in the project. This created controversy in Malaysia and created a general perception that it was a Chinese project.

Apart from these routes, China also invests in China-Myanmar economic corridor under the Belt and Road Initiative (BRI). China aims to build a high-speed railroad from its southwest down through Myanmar's northern regions to the Indian Ocean to avoid the Strait of Malacca. It also aims to develop a new route via Myanmar's Irrawaddy River, a 2,200-kilometre waterway that flows north to south through the length of a nation. But to tackle this route, too, India is further developing ports of the Andaman and Nicobar islands. India has also enhanced the communication infrastructure on Andaman and Nicobar Islands since last year.

"If China had given anything to anyone, they would keep withdrawing with interest, like an usurpers. But karma says that vindictive ones, who go out of their way to hurt others, will end up broke and alone."