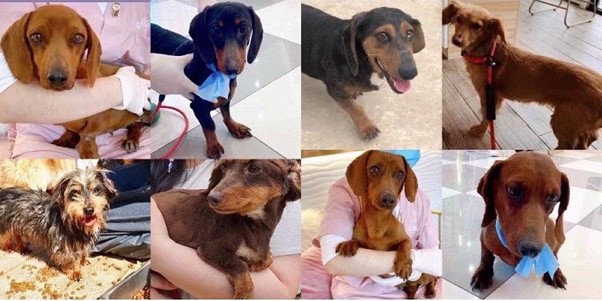 Lesley Scott is the founder of the DMT Dachshund and Rescue support group, which began in May 2020. The inspiration for the group came from Lesley wanting to do more after working for 42 years with dachshunds and flying with one back in 2019.

The charities aim to save dachshunds from China's dog meat trade. There is a high demand for small dogs in China, especially from the wealthy; unfortunately, they are sent to the dog meat trade when they are past their prime. China is one of the locations for dogs being sent to the meat trade, but the charity also works closely with Beijing and North Korea, where they have 4 shelters.

Lesley said, "It's 4,500 for each dog", and they raise their funds through raffles, auctions, working alongside small companies and selling items. Furthermore, when they have a chance to save a dog, the people who are within the group can become guardian angels where they can donate whatever amount they would like.

Christine Barker became a member of the group in January 2021 by the group popped up on her Facebook feed. Since then, she has become immensely involved. She just recently published a new book, Slinky and the Chinese rescue sausage dog" alongside her illustrator Rachel Newell who is also part of the group and has adopted one of the dogs that were saved, Cassie.

The book is based on the perspective of her other Dachshund Denzel, otherwise known as Slinky, getting a sister from China. It all started when she needed an idea for fundraising, and the book came to mind. It took her one weekend to write it, and it took 8 days for Rachel Newell to finish the front cover. It was published on 25th October 2021 and has been a hit since then. It is sold out on Amazon and most bookstores; the book has been described as "a fantastic learning tool for children in terms of getting a sibling".

This charity's aim is to help every possible dog they can from the meat trade in China and other countries, and they always have dogs that they have saved waiting for their new home. Their group can be found on Facebook, and they are also on Twitter and Instagram.