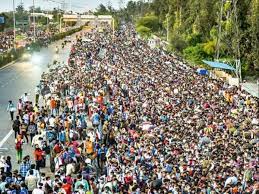 Migration is an unavoidable phenomenon, but, Out-migration, i.e., the sensation of leaving one region to permanently settle in another in search of better life opportunities or sustaining livelihoods, has been normalized over many years. Although migration is a common occurrence, what has made Bihar such an epicentre for migration? How is it affecting the developmental aspect of Bihar and its respective region? The unemployment rate is higher in Bihar than the country's average rate. Regional disparities and casteism make it the country's long-standing wallet of poverty. The lagging of Bihar in development and progress reflects in lower agricultural outputs, lack of industrialization, irregular distribution of land, and landlessness, severe socio-economic division. There is a critical lack of infrastructure, educational institutions, and the state has developed a track record of underdevelopment. The stagnation in all sectors of the economy led to lower per capita income, which means a lower standard of living.

What history says about this?

According to many researchers, we can trace the labour migration from Bihar back to the colonial era. Lower castes and land labourers dominate the stream of migration. The migration in earlier times was seasonal, and railways made migrating possible. It allowed them to come back for agricultural and other productive activities at their native place. When the labourers and farmers could not get enough from their agricultural cultivation, migration became the possible way out.

The west targeted wave of migration from Bihar started in the decades of the sixties. Later, when the green revolution began in the north western part of India, it created an unprecedented demand for labour, beginning as a drop, soon taking a flood. After the 80s, the need saturated in the region of the green revolution because of changes in cropping patterns and machinations of agricultural techniques. The current migration is more towards the urban area and is slightly more permanent in nature. People get involved in various occupations like construction site workers, security guards, rickshaw pullers and coolies, factory workers etc. Trends of rural to urban migration both within and out of the state are backed by census 2011. The data says that between 2001 to 2010, the urban population increased by 91 million. In Bihar, the urban population increased by 11.29% between 2001 and 2010. There is one more cause of migration within the state. According to a New Delhi-based Institute of Social Science study, people from lower caste migrate to cities to avoid exploitation and abuse by the higher caste. The study, 'Why I left my village,' is based on migration from rural Bihar. It got published in 2012.

Let's look into a survey by the Indian Institute of Technology Hyderabad among the 10,000 individuals surveyed. Migrants who moved to urban areas tend to be in better social and economic hierarchies. The study discovered that 78% of the total migrant from Bihar went to an urban destination. The resident belonging to the top of the social-economic order unreasonable represents the rural-urban migration. The number of migrants within households surveyed rose from 62% in 1999 to 65% in 2016. Though recent reports suggest that migration rates are stabilizing, there has been an increase in long-term migrants among the total migrants. Recorded data shows that more than two-thirds of the migrants moved for more than ten months or more in the initial survey. However, it was found that migrants tend to return. Only a mere 39 of households of 1588 surveyed managed to shift permanently.

Households having a high rate of annual income tend to have more migrants than families without any income. More than 90% of the migrants send home some amount of their earnings, and in most cases, it was more than 50% of their income. The data showed that migration increased, with an increase in revenue, proving that poverty plays an important role in migration. 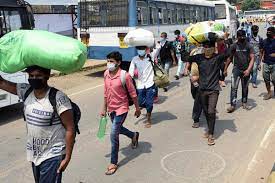 Migration was not only an endurance craft for locals, but it also brought prosperity with it. Unfortunately, the unexpected lockdown last year includes the spread of the coronavirus disease (COVID-19). COVID nearly forced 2.5 million migrant labourers to retreat to their hometowns.

A large number of migrants did not even want to return to their cities with their traumatized experiences. They hardly managed to save enough this time but instead carried painful experiences of dilemma, terror, conquest, pain and distress. As soon as they came back, they started to look for employment opportunities in their neighbourhoods. The state government promised to involve the migrants with the Jeevika Scheme, an initiative by the Government of Bihar. The scheme aims at social and economic empowerment. It is for the poor and helps in improving their livelihood. But the big question is, how will this help the migrants?

Bihar hits by reverse migration due to Covid 19 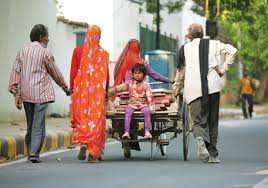 The argument on reverse migration in Bihar also has political implications. The purpose of the Rojgar Abhiyaan is to provide jobs to those who returned home from various states without any certainty of the source of employment.

Chief Minister Nitish Kumar said, "There is no uncertainty that Bihar is one of the worst-affected states because of reverse migration. During our discussion with the migrants, it is certain that most of them do not want to return to other states, at least for some time. He also mentioned that Prime Minister Narendra Modi and the state would need help from the Union government.

Prime Minister launched the campaign of 125 days, which worked in mission mode. It involved concentrated and centred implementation of 25 several types of works on employing the migrant workers on the one hand, also, creating infrastructure in the country's rural regions on the other hand with a support bag of Rs 50,000 crore, rural development secretary N.N. Sinha stated. The primary aim is to employ workers in pastoral areas hit by reverse migration. Jharkhand, Madhya Pradesh, Rajasthan, and Odisha are also under this scheme.

As we have established that migration is an unavoidable phenomenon and, in some amount, is beneficial. Still, permanent migration in an uncontrolled manner could be dangerous for any state, and in this case, it's Bihar. However, with times the infrastructure and livelihood in Bihar have improved, it still has a long way. Outmigration from Bihar is a well-established phenomenon that seems to have started in the nineteenth century and has gained momentum in recent decades. People are moving in the absence of employment opportunities at their native place and for better income rates. Though the poor and socio-economically backward people make up for a significant section of our out-migrants, it is not limited to them. Relatively more stable households also show migration tendency. The remittance sent makes up almost half to one-third of the household expenditure with no dependence on the family's economic status. We can note that money is used on food and items of consumer expenditure, healthcare and education of the family members. The spending of remittance for food and other necessities suggests its importance for survival and gives support against the food insecurity for many households in Bihar. All these factors should be specifically paid attention to by the policymakers while formulating policies for the state.