No Justice, Just Us 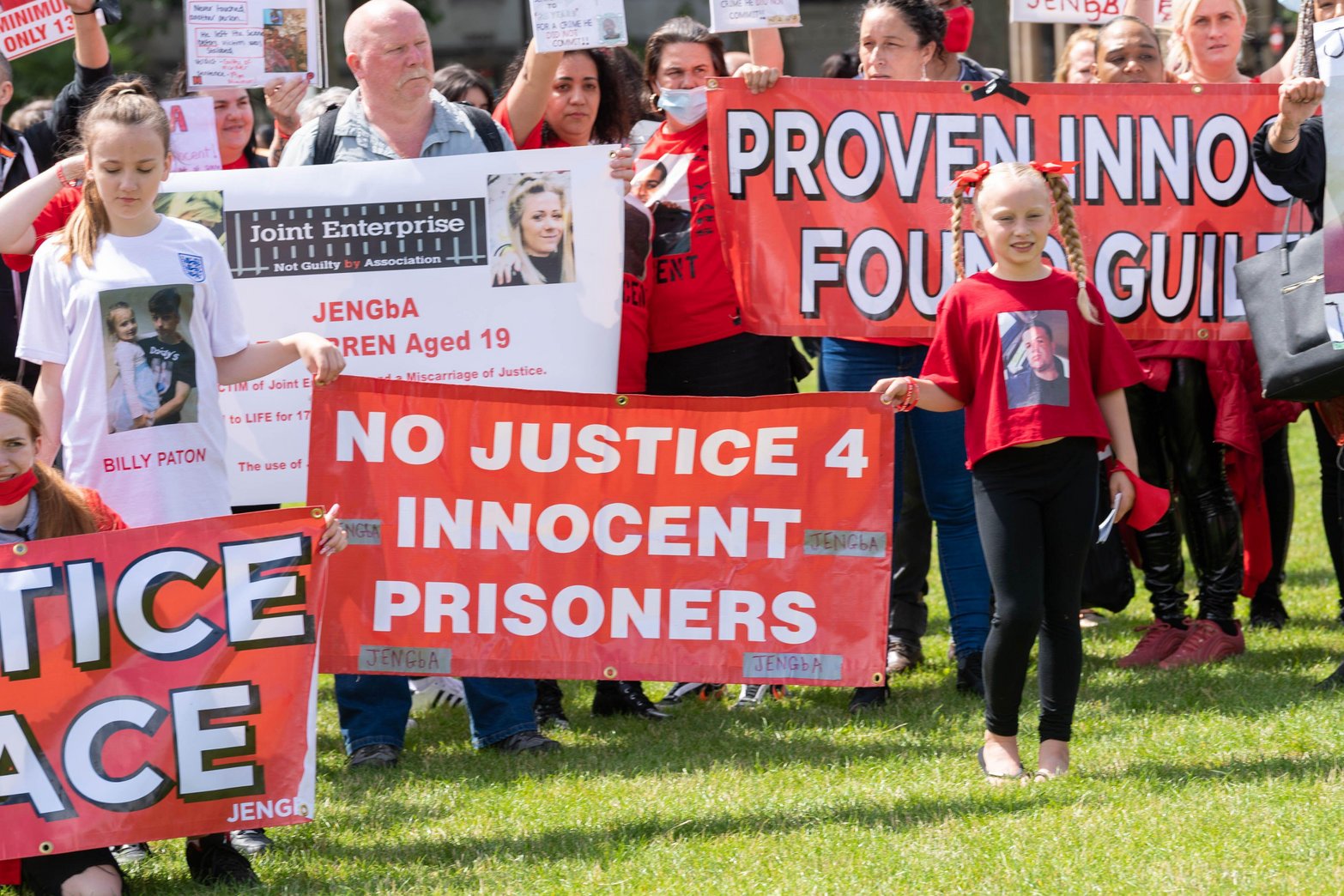 The doctrine of joint enterprise is one that allows multiple people to be charged and prosecuted for a crime, even if only one person was guilty of harming the victim. Simply put, individuals can be jointly convicted of any crime.

The idea of this to most would sound wanton, unjust and cruel, yet this policy is common law in the criminal justice system of England and Wales. As with every single stage of the criminal legal system, it falls heaviest on those with the weakest shoulders, rendering those who are poor and racialised as Black carrying the burden.

In Moss Side, Manchester an area in England that has a predominantly Afro-Caribbean population, saw a recent case of 11 teenagers jailed for the murder of one person, has the workings of joint enterprise. Another, where Black teenagers we locked up for sending angry text messages. Many innocent young boys have had their futures taken from them, by an inherently racist and barbaric legal doctrine, that provides little justice to victims of crime, but rather unnecessarily funnels young people through the justice system.

Academics in both sociology and criminology have written extensively about the oppressive nature of the criminal legal system, which operates as some kind of gangster racket. That is incapable of protecting victims of crime, prisons' inability to reform and the purposeful incarceration of people in all race and class subjugated groups to bolster the ever-expanding carceral state and feed the prison industrial complex.

Despite England and Wales, statistically having fewer prions than North America or any other country in the Global North and South, Britain incarcerates Black people at a higher rate than Black Americans. Sociologist John Moore writes about the colonial roots of the British legal system.

Moore describes it as one that continues the flow of slavery, racial exploitation and White Supremacy at the hands of White Europeans of racialised people in the Global South, as being mirrored in modern British society.

There are more Black Americans imprisoned today than there were enslaved, and yet Britain still tops that.

Institutional racism within the justice system should no longer be viewed as a bug, in an otherwise good system, but rather the default settings.

Joint Enterprise Not Guilty by Association (JENGbA) is a charity that campaigns against the use of the joint enterprise doctrine. The Centre-Left Labour party, the official opposition in the U.K. has promised to reverse the injustice of joint enterprise if they get into power. Of course, this rests on a premise that Labour will win the next general election.

Jack Merritt, was a victim of a terror attack in London in 2019. After his death his father, Dave Merritt spoke out against the bastardisation of his death to champion more repressive criminal justice practices. Jack spent his short life campaigning for criminal justice reform and decarceration.

Dave Merritt said: ‘That door opens up a world where we do not lock up and throw away the key. Where we do not give indeterminate sentences, or convict people on joint Enterprise’.

The racist of a ‘gang’ often associated with young Black people, including information about people’s associations, friends, families, use of social media, and even music preferences – has been used in joint enterprise prosecutions, particularly in those brought against of people of colour.

The Lammy Review 2017 highlighted how joint enterprise leads to miscarriages of justice.

Intersectionality is also important in how injustices intersect with people's identity, to produce a unique form of oppression. Not only is institutional racism unequivocally endemic within the criminal legal system, but misogynism is also present.

Research shows that when women offend, they suffer through a process of double deviance. Women are condemned for the criminal act they have been convicted for, but also condemned and punished for acting outside of their gender norms. Crime is not lady-like or woman-like. Women that offend are not seen as good mothers or good citizens in society.

A study from the University of Manchester showed that many young girls and women were charged with serious offences with over three-quarters convicted for murder or manslaughter offences. This is even though in no cases did the woman or girl use a deadly weapon, in 90% of cases they engaged in no violence at all, and in half of the cases, they were not even present at the scene.

This indicates that the police and Crown Prosecution Service (CPS) are charging women with limited evidence and instead relying on inference. In one sentencing remark, a judge referred to a woman as “a feckless mother of unfortunate children” For whom “the state picks up the pieces of your fecklessness”.

The most oppressive practices of the criminal justice system are often defended in the name of marginalised communities, which in reality does nothing but contribute to their marginality. Disproportionately imprisoning women and Black people does not make those communities any safer from violence, but in reality, contributes to the violence they suffer as a consequence of the pressures of imprisonment and the lifetime stigmatisation that comes with being an ex-offender.

It does not give Black and other racialised communities a voice, shield women from violence and challenge the epidemic of male violence in our society, but rather just contributes to a deeply oppressive criminal legal system.

We must strive towards a world where those who are the most vulnerable are cared for, where politicians and wider society understand that crime is the symptom of something, not a disease. Transformative justice, peacebuilding, community justice and rehabilitation should be our political philosophy around crime.

Criminologist Robert Reiner said: ‘the most important address for crime control is not Scotland Yard, but 11 Dowing Street’.

No justice- no peace.