PM Narendra Modi unveils the national emblem, but the opposition calls it a "show." 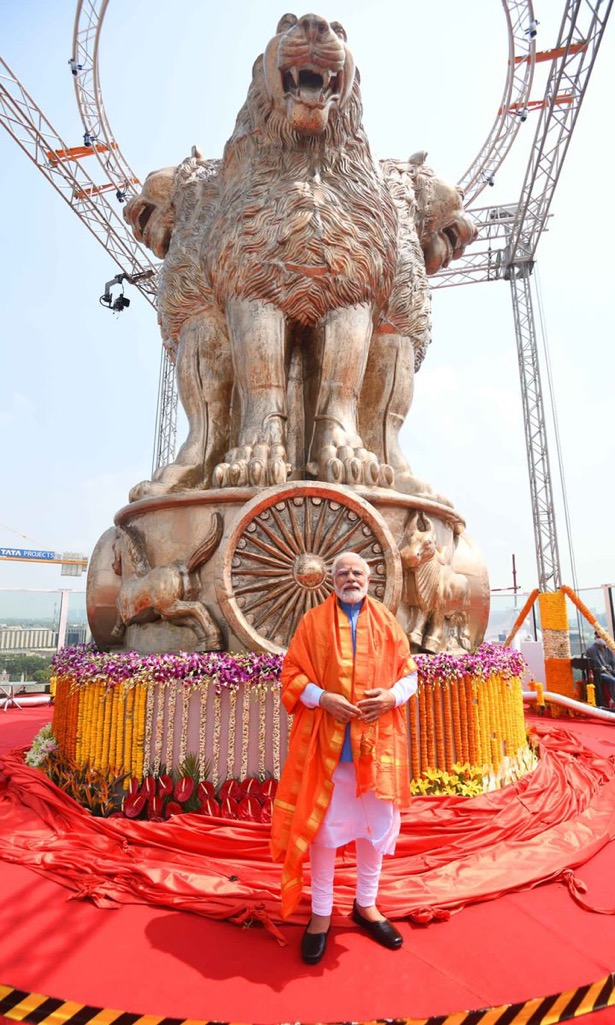 Sunil Deore and Lakshman Vyas created the metal sculpture in Aurangabad, Jaipur, and Delhi. The previous design featured a spire atop the building, which was replaced with the Ashoka Emblem in 2020.

However, the ceremony sparked a political uproar, with opposition parties accusing the Prime Minister of making it a personal event and questioning the Constitutional propriety of the PM unveiling the emblem atop the Parliament building. The BJP responded by claiming that the opposition parties' allegations are politically motivated.

The new Parliament, a ground plus two-story triangular-shaped structure, is expected to be finished in time for the Winter Parliament session. The new Parliament was supposed to be crowned with a spire, but that was changed to the design of the Ashoka emblem.

The central foyer has been renamed Constitution Hall because it will house the Constitution for public viewing. A library will also be built near the main entrance.

"From clay modelling/computer graphics to bronze casting and polishing, the concept sketch and process of casting of the national emblem on the roof of the new Parliament building has gone through eight different stages of preparation," according to a PMO statement.

"Honorable Prime Minister Narendra Modi Ji inaugurated the national emblem installed atop the new Parliament building." While the new Parliament House will fulfil the aspirations of a new India, this national symbol will continue to inspire us to preserve India's unity, integrity, and sovereignty," Lok Sabha Speaker Om Birla said on Twitter.

Meanwhile, the Prime Minister was chastised by the Opposition parties for unveiling the national emblem cast atop the new Parliament building, which they described as a "clear violation of the Constitution."

"The people of India, not one man, own Parliament and the national emblem." Consider if the leaders of all major political parties were present at today's inauguration, swearing to uphold the Constitution. But why to ruin the photo for our Shahenshah?" tweeted Gaurav Gogoi, the Congress deputy leader in the Lok Sabha.

The Constitution clearly distinguishes the three branches of our democracy: the Executive (government), the Legislature (Parliament and state legislatures), and the Judiciary. The President summons the legislature. The Prime Minister is the Executive's leader. The Legislature has an independent role to play, including the ability to legislate laws and hold the Executive accountable and answerable. "The head of the Executive is undermining the constitutional separation of powers between the three wings," the CPM said in a statement.

"Those opposing the unveiling ceremony should understand the administrative process." The urban development department handles everything from design to funding and construction supervision. "The prime minister even laid the foundation," Baluni explained.

He stated that once the construction work is completed, the building will be handed over to the administration of the parliament. "Unfortunately, the opposition parties have issued yet another set of unfounded allegations, which smacks of their political motivation," Baluni said.

The CPM also objected to the religious ceremony that was planned for the event. D Raja, general secretary of the CPI, stated that Parliament belonged to everyone and questioned: "how a personal event" was organised there. "Also, Parliament is neutral, so why include religious functions?" he asked.