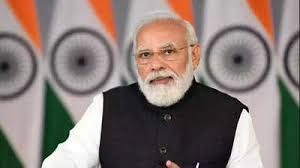 The stock market and elections, two of India's most important events, are said to be driven more by feelings than by logic.

Prime Minister Narendra Modi may have administered over two billion doses of the Covid-19 vaccine under his leadership. India may have also developed two highly respected vaccines under his leadership, become aatmanirbhar or self-sufficient, constructed vast stretches of infrastructure, and liberated women by amending the Medical Termination of Pregnancy Act and banning instant triple talaq. However, he would need something that resonates more strongly with the public to secure the kind of support he desires.

Even a seismic shift in culture, such as the repeal of Articles 370 and 35A in Kashmir, will be five years in the past when it comes to stirring up enthusiasm among the cadre and voters.

Under Modi, the BJP's election machine works like an onion. As election day approaches, a slew of dramatic decisions and events are peeled back layer by layer, each with a specific impact. Before 2024, one can expect the opening of the Ram Mandir in Ayodhya, the removal of Left and colonial bias from India's school curriculum, and major foreign policy or domestic security successes.

A potentially devastating poll weapon, on the other hand, maybe in motion right now. a weapon designed to combat corruption

There has been an increase in the CBI and ED's activity, and instead of pursuing small-fish hunting, they are pursuing high-level political leadership. The AAP's financial pillar, Satyendar Jain, has been arrested. Sanjay Raut, the Shiv Sena agitator who is roundly despised, is in the same boat. The arrest of minister Partha Chatterjee and his lover Arpita Mukherjee and the ensuing crisis surrounding the TMC is playing out on national television in an ugly but engrossing spectacle. Following in the footsteps of Abhishek Banerjee, his wife Rujira is discreetly making her way around CBI offices.

They're wasting their political capital by making a big fuss about their court appearances and ED interrogations, which amounts to a huge, monarchy-sized squabble. Other parties and their leaders are anxiously awaiting the opportunity to speak up.

The administration appears to be refocusing its attention on illegal funds. An audit of 368 cases under the black money statute, which deals with unreported earnings from foreign sources, resulted in a tax demand of Rs 14,820 crore, the department recently announced in Parliament. Unreported HSBC deposits have been taxed to the tune of Rs 8,468 crore, and fines of Rs 1,294 crore have been imposed, Finance Minister Nirmala Sitharaman stated in the Lok Sabha. There were 648 declarations of foreign assets worth Rs 4,164 crore under the Black Money (Undisclosed Foreign Income and Assets) and Imposition of Tax Act, 2015 during the three-month compliance window according to the minister.

However, India's middle and lower classes continue to be riled up by black money. Because while Modi has reduced high-level corruption, it is far from eradicated.

It's laudable, but not particularly impressive, given the high expectations set for Modi by the general public. There is still a lot of public desire to see great personalities convicted of corruption and hauled to the ground for taking millions of dollars from the public coffers.

Having a strong desire for public justice over ill-gotten gains could be a powerful election issue. Those in the lower and middle-income brackets will appreciate it.

Additionally, it helps break up parties that are kept together by a glue of corruption, nepotism, and opportunism instead of grassroots cadre labour and strong ideological emphasis.

No longer does the old-world analogy of the corrupt receiving public sympathy for being hauled over the fire hold. As long as they can be confident that the thieves they are punishing are, in fact, crooks, the new India has no problem with them. It's willing to stand up and celebrate the missile's full picturesque trajectory.

Modi may have already fired it, given the year 2024 as the target date.