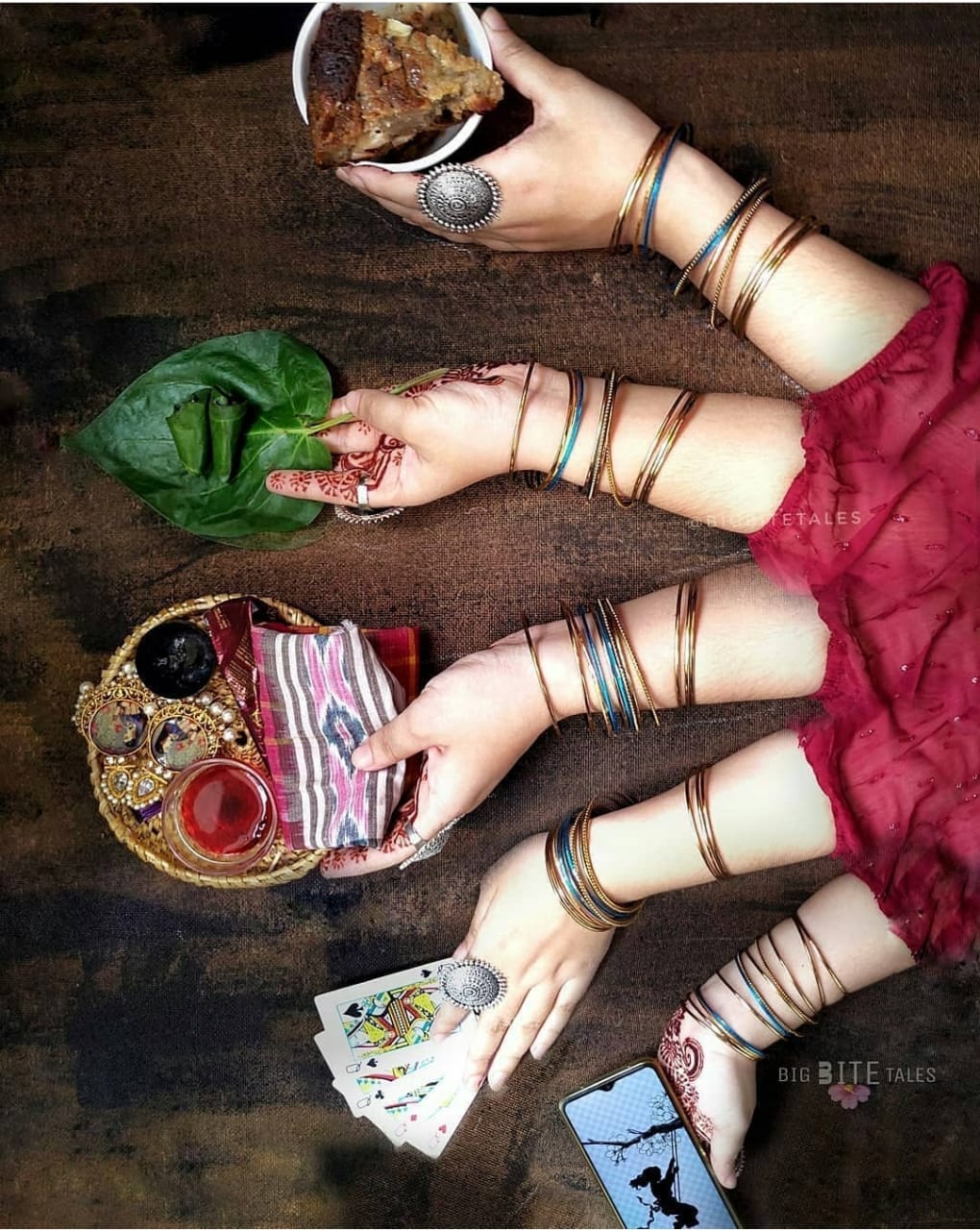 Today, when the majority, of India, still sees menstruation as a proscription that should not even, be discussed in public, Odisha just concluded Raja, a very ancient festival celebrated in the eastern state, recognizing womanhood, mother Earth, and her monthly period. Odisha is a melting pot of tribal culture and various other faiths. Thus one can see influences of each culture beautifully amalgamated into various interesting festivals today. Raja is one such annual festival which was celebrated from 15-18 June this year.

Raja Sankranti is a four-day festival. Each year fervently celebrated across the state of Odisha. It falls in the mid of June, coinciding with the start of the rainy season. It is a commemoration of fertility, womanhood, and rejuvenation of mother Earth. The festival beautifully blends the essence of women with the femininity of Earth. It celebrates her ability to be a mother, who gives birth, sustains and nurtures life. 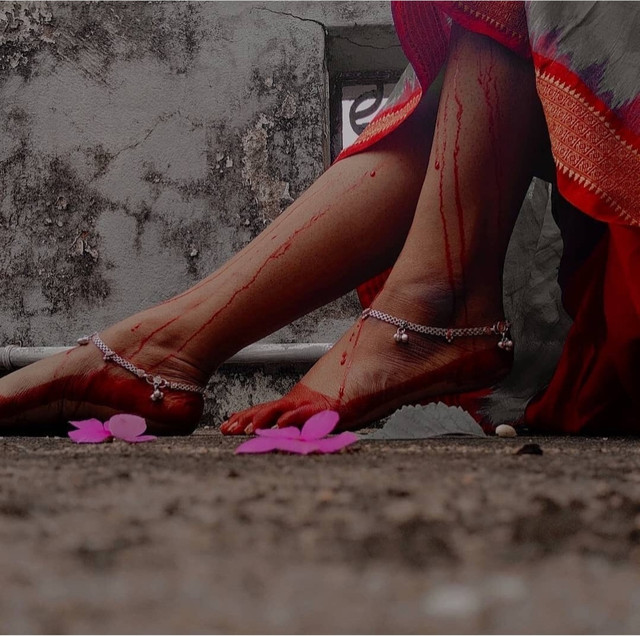 The eve of the festival is called Raja Sajabaja, or the day of the preparation. On this day, elaborate preparation is done for the upcoming four days of celebration. Playgrounds are set with swings and decorated beautifully with flowers and rangolis. Various sweets, snacks, and pithas (myriad types of Odia pancakes) are prepared. 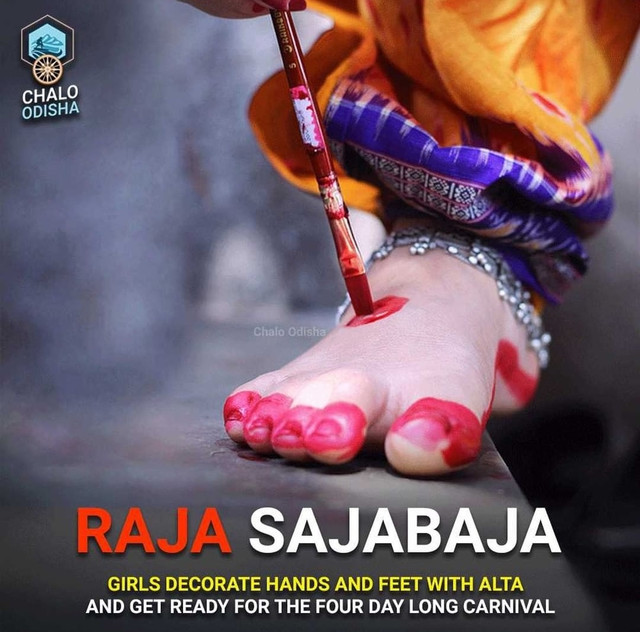 The first day is called Pahili Raja, the start of the festivities. Women dress up in new clothes, adorn themselves with the best of accessories and ornaments, apply alata and get ready for the four days of complete rest and pampering, which involves endless eating and playing. The grinding stone, as a symbol of Bhoomi, is cleaned and is symbolically given a rest. 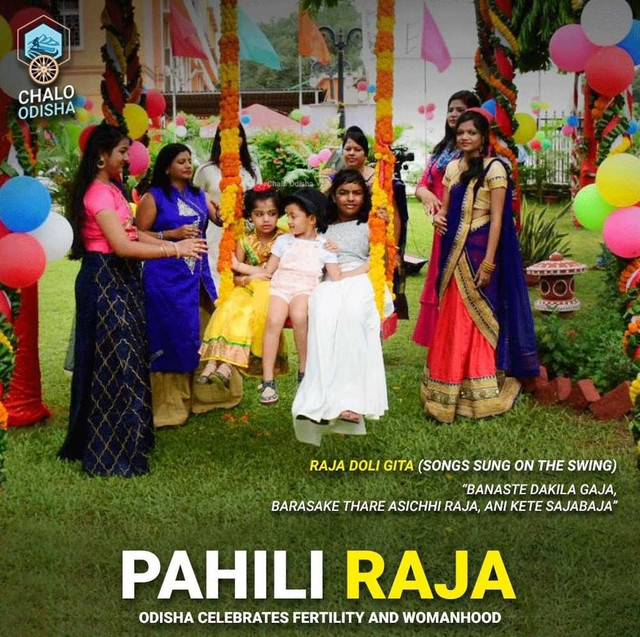 The second day is called Mithuna Sankranti, is regarded as the start of the rainy seasons. It welcomes the agricultural year in Odisha, which marks, through biological symbolism, the moistening of the sun-dried soil with the first showers of the monsoon in mid-June, thus making it ready for productivity. The festivities continue. Arrangements are made for different cultural programs, community eating and dancing, competitions, and games.

The third day is Bhudaaha or Basi Raja, the day of rest. This day is observed, in just eating different delicious food and resting. Girls and women visit the each-others house and are served, with delectable fares like Pitha (various pancakes), Mitha (sweets), Puri, Tarkari (several curries), Khiri, and sweet flavored paan (one of them must be offered thing).

The fourth day is Basumati Snana, the final day of rejuvenation and ceremonial bath. This bath is the concluding day when the main puja, is performed. The ladies both the grinding stone as a symbol of Bhumi with turmeric paste and adorn it with flowers, sindoor, etc. All types of seasonal fruits are offered. Women are reminded of their unique power and taught the significance of their special ability. Raja Mahotsav or simply ‘Raja’ (pronounced as Raw-jaw), is derived from the Sanskrit word ‘Rajas,’ meaning menstruation. And when a woman menstruates, she is called ‘Rajaswala’ or a menstruating woman.

All four days are thus an ode to the creative power of women. This beautiful moment of womanhood, which many hide as impure, is celebrated like a festival with full pride in Odisha. They believe that it is this moment in a woman’s life that brings new possibilities and is an ability to create and sustain.

The connection to Earth –

Raja is also interpreted, as the festival of reinvigoration of Earth. Odias believe Bhudevi, mother Earth, menstruates during these days. It coincides with the onset of monsoons when Earth moves ‘inwards’ and rests. So all agricultural activity is suspended, and people are told to tread lightly on her. She is ceremonially bathed, and elaborately worshipped on the fourth and final day.

How was this year a bit different?

This year due to the ongoing pandemic, the festival was a low-key affair. Odisha Tourism Development Corporation (OTDC) Chairperson S. Mishra talked to ANI about the significance of the festival. While talking about the arrangements that were done for the smooth conduct of the festival, she informed that the festival is also synonymous with varieties of cakes (pithas). Considering this, OTDC had launched a special program called 'Pitha on Wheels' on Sunday (June 13).

"Due to COVID-19, we celebrated Raja Parba with a low key. As women do not work during these 3 days, 7 vehicles of 'Pitha On Wheels' reached people's doorstep in Bhubaneswar," she added. Varieties of traditional pithas such as 'Poda Pitha', 'Manda', 'Kakara', 'Arisha', 'Chakuli' and 'Chandrakala' had been provided, through these outlets in the three major cities of Bhubaneswar, Cuttack, and Sambalpur said, Mishra.

Other similar festivals across India –

Ambubachi Mela in Assam is celebrated in Guwahati's Kamakhya Devi Temple for three days as it is believed, during this period, the Goddess Kamakshya Devi undergoes her annual menstrual cycle. Three days later, the pind or the yoni-like structure that is worshipped, is given ritual bathing. This ritual is done for the purification of the Goddess after her menstrual cycle. After the cleansing ritual, the customary Puja, is done which is suspended during the period of rest.

Manjal Neerattu Vizha in Tamil Nadu is a turmeric bathing ceremony celebrated by women for nine days. It acknowledges a girl’s coming-of-age when she gets her first period. The girl puts on a beautiful saree and gold jewelry. She sits with other younger girls who are yet to reach puberty. She receives her first saree from the elders of the family.

Ritushuddhi or Ritu Kala Samskara in Karnataka is the most commonly known ceremony, that celebrates a girl’s transition to womanhood. This is also when she receives her very first saree. During ‘the half-saree function,’ the girl puts on a half-saree for the first time in her life. She will continue to wear it until her marriage when she drapes a full, saree.

Each of these unique festivals effectively shows menstruation, an aspect of womanhood that gives the feminine her ability to create life, is a reason for celebration. It’s an honoring of her creative energy, the sacred feminine, and nature. It is recognition of the importance of menstruation in a woman’s life. It asserts that menstruation isn’t a taboo or a curse; it is a process as natural as rain drizzling on a green pasture.

It is interesting to see the beautiful intermingling of feminism and environmentalism in these festivals. It helps create awareness about the conventional occurrence of periods in a woman and that; there is nothing impure about it. It creates awareness about Earth and connects the arrival of monsoons with its regeneration interpreting, it as its menstruation. It stresses that, after all she provides us with; she needs to be cared for too. She is not only to be exploited but respected, loved, and given time to regenerate.

One of the most significant aspects of menstruation is that it marks the transition from girlhood to womanhood. In the old days, this transition was marked by a period of celebration, as the elders claimed that the girl is now as fertile as nature. Such festivals are living proof that society had no reservation regarding the period in the past. But over time, the real significance of the festivals got diluted, menstruation not only became a taboo, but several myths began to emerge from half-baked tales, most of which lacked authenticity.

But gradually again, things are changing, and the youth has started talking and discussing. It shows that if awareness is integrated subtly with culture and lifestyle, people tend to accept and adopt it faster. Ancient India took pride in the different aspects of man and woman and embraced diversity, diverse relationships, and diverse traits with élan. It is time we rediscover this openness to the natural processes of our living, imbibe them into our psyche without any force-fed activism, only then can we progress as a society.

On What Cost has Man Defeated the Virus?