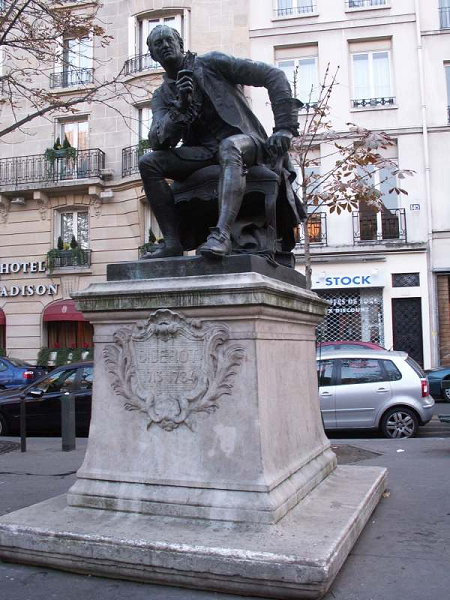 What we have stated thus far allowed us to look back with a critical eye, and acknowledge that differences between various human groups (as well as the power structures internal to each) are not the mark of different humanities but rather the result of historical contingencies.

We can now face the last step of our analysis, that being Supplément au voyage de Bougainville (penned in 1796) by Denis Diderot (October, 5th, 1713,  -July, 31th, 1784). Despite its presentation as a supplement to something else, the whole text has been penned by Diderot: by analyzing reports streaming in from various explorers, he states that the so-called “savages” are not even just part of “primitive” humanity: rather, they become a window on a different world. The book itself is built as a series of dialogues between the inhabitants of Tahiti and European explorers, on the one hand, and an exchange between two figures simply called A and B, on the other. At the core of the book, both literal and metaphorical, Diderot presents a monologue by an elder Tahitian pronounced at the departure of a group of explorers.

The reality described within the book is utopian, a self-contained and self-sufficient world deprived of history and variation within which so-called “savages” live: they become both an unattainable ideal and a proposition others (that being us “civilized” folk) can aspire to and strive towards.The book itself tackles a series of tropes that depict the so-called “savage” as inhuman (meaning physically imposing, as well as fierce) by sheer virtue of having to survive an overall hostile environment; such characterization departs from an accepted canon (one that Europeans probably embody and built) but it’s no longer an extraordinary phenomenon in itself: after all, humankind has always strived to make the most of the places and circumstances it found itself into.

What we are interested in is howthe differencesbetween Europeans and Tahitians came to be:the juxtaposition between the two groups is described as that between simplicity (“youth” if you will), freedom on the one hand, and complexity, (“oldness” of a sort) as well as tradition, constrains and dissimulation on the other. The “savage” Tahitians live most freely, while the “civilized” Europeans are shackled.

After having set the stage, Diderot would postulate the existence of three distinct codes humankind could live under(those being natural, civil, and religious), in perpetual contrast between themselves. The problem would be that it is not only impossible to follow more than one of these laws at a time, but the very boundaries of each seem to be somewhat fluid: as such it is not guaranteed to be able to follow even just one of them since overlap and difficulty discerning what exactly falls under the rule of each.

The only possible synergy possible between them would be the combination of civil and religious law, that would enhance the opposition with the natural code: the theological and political system derived by such alliance would present itself as anti-Nature, making the juxtaposition impossible to avoid. There is no chance, Diderot states, for the surplus law (or laws) to be simply cancelled. A couple of options remain at this point: to look at the religious and civil codes as products of the natural one, on the one hand, or to separate each of them into its own strictly defined field of influence on the other.

What would the inhabitants of Tahiti think of such solutions, though? Looking directly to the text for answers (specifically into an exchange between a chaplain and one of the so-called “savages”, by the name of Orù) it is stated that the conflicting directive between the various codes and legislation may create scenarios in which a single object or course of action is praised or despised or demanded by the three different laws. “What then?” is the question we must solve: what would happen if, for example, nature would offer a possibility and religion would despise it and law praised? To whom should we pledge allegiance? In order to please one principle in such a situation, one would need to juggle the demands of all three resulting in very little survival. The idea is that limitation imposed on natural desires act in opposition to a propensity for change that is a characteristic of humankind.

After tackling the problem of civilized society, it is now Orù’s turn to present the customs of Tahiti and the conclusion we reach is that what the priest judges strange and immoral is simply disciplined by a different set of rules (in itself deprived of the claim to be eternal, that European customs and laws have). This is the loophole (of a sort) that the inhabitants of Tahiti have developed to avoid open conflict between the three codes mentioned before, and their way seems to prove more effective at coping with the dissonance of the various principles than that adopted by the “civil” world Europeans inhabit.

The codes of civil and religion exist within the wider context of a nature that encompasses everything (even those ways of conducting oneself that could be called “sophisticated” or “civil”): to borrow from a different field of human ingenuity, it’s set theory. The civil and religious codes exist not as assets on their own but rather as subsets of a wider whole (that being nature): humankind does not operate in a void of sorts, but somewhere and somewhen; we can find ourselves within the world (and the universe at large), and cannot leave it. There is no need to operate a return to nature, then, since no one ever truly abandoned it to go somewhere else and there is no need to take the civil and religious codes back into nature since nature itself stands as a framework for both.

At this point, division and fractures between those three principles simply cease to be: the various sources contaminate and permeate each other constantly, explaining their ineffable overlaps. Assuming the goal of the whole system is to reach happiness, the ways left open to such an objective are not only multiple but subject to change brought in by time. The Tahiti described in Supplément au voyage de Bougainvilleis, as such, a mere example of an alternative quest for happiness.The fact that it describes individual or collective happiness is of relative importance: it paints a scenery within which a lot of people can pursue their own ideas and project for happiness.

The “civilized” world seems to play with a different set of rules, given what we saw thus far, and it also seems that the lack of happiness of some individuals corresponds to  the active subordination of others. Before we move around expanding circles of moral consideration to the interests that non-human animals bear, then, it may be a good idea to begin looking up to our fellow humans and keeping their desires in whatever picture we will paint with the colors of the wind. Or maybe not: to begin somewhere or somewhere else is only a matter of perspective, after all: what matters is keeping the momentum going, and expanding the circle after all.