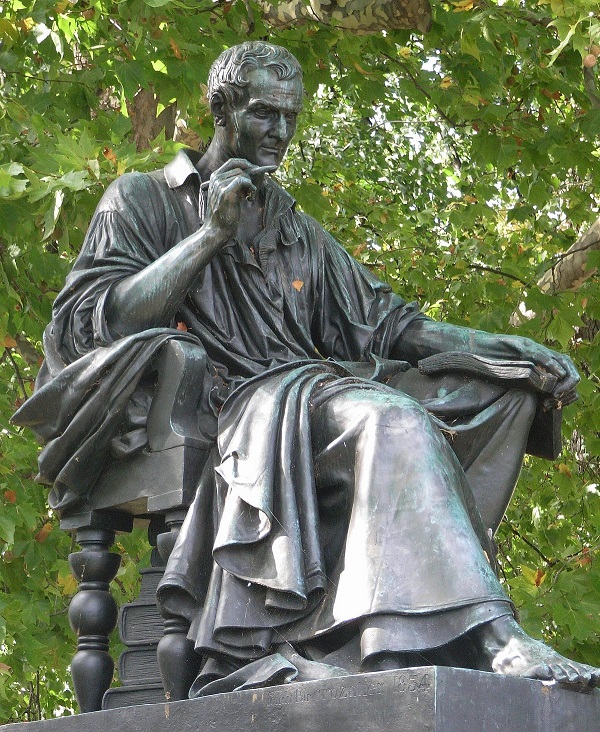 Looking at the arguments Vico (June, 23th, 1668 - January, 23th, 1744) produced in his Principi di Scienza Nuova (first edition published in 1725) we have concluded that those individuals with whom European explorers came into contact were not, in fact, a different (or inferior in some way or some other, for that matter) kind of humanity from them. Rather, they were people that stayed somewhat back compared to other groups (namely, Europeans) and that only now came into contact and interacted with them. Explorers were met with a once-in-a-lifetime opportunity: to spy on bits and pieces of their history through a window (of a sort) in time, and to witness the development of something acting not so different from what were their European ancestors in times long past. The only primacy (if we can even speak of such a thing in this matter) of western civilization as such would be that of entering history “proper” long before other groups of human beings. Where exactly all of this is leading us, though, is to a very specific argument: where the hypothesis of an Expanding circle would have us see non-human animals as carrying interests worthy of care, we can only reach such a point through some preliminary work (a missing link of a sort, if we want to put it that way): the expansion of the circle of individuals whose interests we are to take into account to other human beings first of all.

Having reached this point, we can move on to the second step of our discourse: Discourse on Inequality, penned in 1755 by Jean Jacques Rousseau(June, 28th, 1712 - July, 2nd, 1778). Postulating that humanity and its customs have changed throughout time (as we have already stated by analyzing Vico since the discovery of the American continent Europeans had to come to terms with how it could be possible for people so similar to themselves to live beyond the Atlantic Ocean in the first place) and that natural principles would lead to stability and absence of change as custom consolidate themselves, it remains to be seen and accounted for of how inequality amongst humans came to be.

Let us look to Rousseau’s text for answers, allowing us to point out how what he calls savage man felt only his true needs by living without ingenuity, speech, home, war, and bonds (amongst others): he looked only to what he believed interesting, and his intelligence would not move beyond the bounds of curiosity. Whatever invention or innovation these savage humans discovered would die with them, the single individual having no way to share it with others of his kind. Centuries would grind on with humanity staying the same.

Inequality and civil society would have been born, Rousseau states, only at the moment one first human being stated “this thing is mine” and managed to persuade and convince others of such a state of affairs. To investigate how such a result was reached (and how it sprouted inequalities of far greater reach and scope, given some time) is not really of capital importance. Suffice to say that the process leading out of the primeval natural state is, according to Rousseau, caused by various and distinct factors that come to act at the same time: the nature of such a move is casual by default, and as such, it cannot be defined as a philosophy of history. The endpoint of inequality, magnified and expanded throughout time, is the result of contingency and as such it could also not have been a thing: that it has happened doesn’t mean it needed to happen.

According to Rousseau, inequality amongst humans is based on individual abilities and inabilities, upon which take root contingent differences based on circumstance. Where exactly does distinction between difference and inequality lie, though? The key feature is that the latter originates a hierarchy, and necessitates a continuous interplay: one cannot be of higher rank than someone else while also living in solitude, since the very notion needs a second element compared to which one is higher or lower in importance. What began with a combination of natural differences and historical contingencies grew and crystallized itself, in time, as inequality proper thanks to the progressive disappearance of those causes and phenomena outside of humankind’s direct control.

At the same time, the hiatus between the two opposites of this interplay grew larger and larger, up to the point of direct subordination. The question then becomes: how is it possible for humankind to accept such a situation, given their starting point was a primeval state in which the very notion of being subordinate to someone was absurd? The straight answer would be “through fear”, which is a byproduct of inequality itself and also a mean thanks to which inequality manages to persuade others to give up freedom by promising security. This is the turning point upon which repetition can be grafted: bonds of servitude spread far and wide in the name of an addiction to peace and quiet now consolidated; in time humankind is brought to compliance and accepts to be yoked by someone without being able to bound in turn. At this point, inequality and domination are actively desired with the hope of being someday able to retaliate and have the dominated grow to be dominators in turn. An absurd is reached: multitudes are oppressed and vexed in turn. The solution Rousseau offers to such a conundrum comes with the presence of a completely different viewpoint, gazing at this whole from the outside: a look that could, if anything, shake this system to its very foundations and (hopefully) stem some kind of change. And what could such a viewpoint be, if not that of so-called “savages”? Who, if not them, could look at the whole thing with eyes enough naïve to spot the defects of the system? Who, if not them, would have no experience of the whole swamp Europeans have mired themselves into? Maybe there is value in a multiplicity of viewpoints after all: who would have thought that so-called “civilized” society could have something to learn from savages?