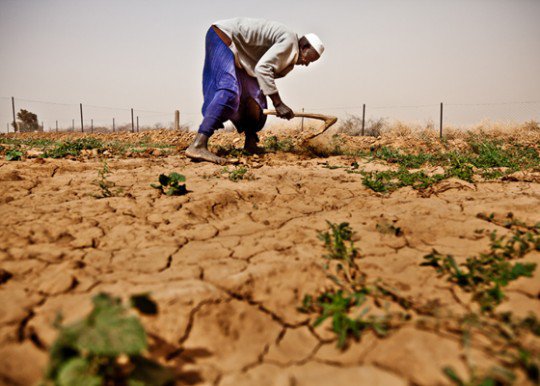 Climate change is the curse that keeps on taking.

It is a phenomenon that drains the economy, cripples social structures, tantalises the environment, and indirectly compresses resource supplies, particularly food. The value of food is largely taken for granted in wealthy nations like the US and UK despite it being quintessential for how we survive every day.

As the world becomes increasingly ravaged by climate change, a sense of a foreboding food shortage is presenting itself as the next likely hurdle.

The direct physical risks of climate change – heatwaves, droughts, intense rainfall et Cetra – will undoubtedly affect what foods can and can not be grown, the production processes adopted, and ultimately the supply availability of certain climate-constrained foods.

The passing summer’s heat wave has exposed the fragility of global food production and security across nations.

In North India, the intense heat severely reduced wheat harvests whilst other places have faced crop destruction from floods.

Moreover, the widespread droughts in Europe forced many farmers to use cultivation methods traditionally used in dry regions of East Africa.

Whilst not related to climate change, the Ukraine-Russian dispute has demonstrated the magnitude of effect conflicts have on both domestic food production and international trade. A UN report has stated that climate change will intensify points of political instability as resource scarcity grows and food shortages or famines become a common reality for all.

Further, the food system contributes 10% to climate change through emissions from its production systems and inputs of fertilisers for example. As suggested by Bloomberg reports, actions taken to reduce the system's emission contributions may generally affect yields and productivity and cause resulting disruptions to supply and demand along the global trade networks.

A known characteristic of climate change is that those who have not directly participated in (nor benefited from) its emergence are those who will be the least likely to cope with disaster. This so-called tragedy of the commons is a metric for the extent of global inequality dragged throughout history as countries like Pakistan which have contributed less than 1% towards climate change have and will continue to be those who suffer most for its ill effects.

The ongoing disastrous monsoonal floods affecting Pakistan have caused significant deficits in the food supply as water inundates millions of acres of crops and kill hundreds of thousands of livestock.

As it stands, climate change's most perversive effects on the food system are and will continue to be most harshly felt in those countries which have contributed to it the least and are unable to cope with it the most.

However, climate change is a global problem.

Acknowledging this assures that it may be Pakistan or other places afar today, but it will become tomorrow's central issue and risk at home.

A 2019 report has indicated without adaptation, climate change will slow agricultural yields from 5 to 30% by 2050. Declining productivity rates will occur concomitantly with a growing global population and national developments increasing food demands by 50%, ultimately increasing prices as supplies become ever smaller.

The weather extremes experienced this year are only but a taster for what is installed as a future reality for everyone. In this instance, it becomes essential to bring the future forward through sustained efforts taken to solve the climate crisis and its resulting global food production challenges.

Securing food supply, safety, and security demands new efficiencies, industrial processes and technologies, with the speed and scale of implementation critical for its success.

With each day that passes without action, the task of adapting and mitigating climate change grows larger, with the window of opportunity narrowing and the risks remaining existential.