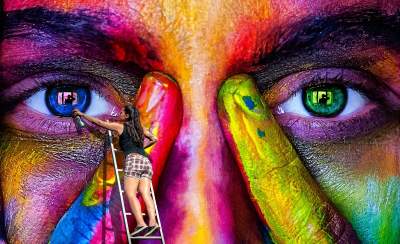 The history of art has been symbolic over the years. Whether it's a peace offering or transference of serious messages to the masses, art has vied and continues to play a significant role. Art in general possesses ideology, belief, culture and so does Graffiti, the youth's favourite form of art around the globe . This art has not received the respect or encouragement it deserves. There's a taboo around graffiti art and artists in several countries.

Graffiti is writing or drawing created on a wall or surface, sometimes without permission and at intervals in public areas. Graffiti may be something, from straightforward words to elaborate wall paintings It has existed from the beginning of man with examples heading back to ancient Egypt, in the ancient Hellenic period. Only ten countries have legalised graffiti and in others it is known as malicious mischief.

Graffiti is a dynamic form, the graffiti that we usually see on the streets is painted over alternative paintings that adds a lot of meaning to the art. Some basic types of graffiti are

3D graffiti items produce AN illusion of dimension. Besides the walls, creating 3D graffiti on pavements and roads is additionally widespread. Edgar Mueller and Kurt Wenner are the foremost renowned artists famous for adopting this vogue.

Short for masterpiece, this is often the design that modified the perception of graffiti from against the law to an acceptable mode of expression. Painted by freehanded, it features a minimum of three colours. Historically, manufacturing these works secured artists respect from their contemporaries as standing in a comprehensible place painting on walls wherever graffiti is unlawful could be a nice risk.

Stickers are kind of posters but smaller and eliminate the requirement of adhesive. Some merely are just sticky labels whereas others are more elaborate.

Graffiti culturally comes from Afro-American culture and is believed to be utilized by them in protests. So since its inception it has a representative purpose and transference of daring messages. Graffiti, being a type of art, deserves as much respect as its counterparts do. In the last decade, youth has shown interest within the form and have modified mindsets. If Government's theme advertisements like Swachh Bharat Mission and spiritual paintings un public areas may be positive, then why not a basic art?