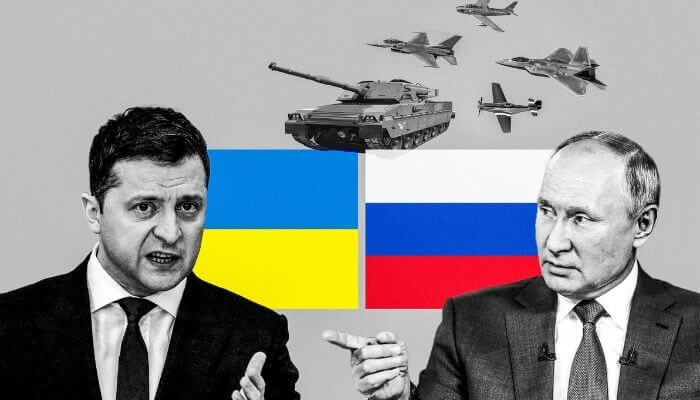 The Russia-Ukraine crisis is not new, as many of us might have thought. It has a longstanding history starting from 2014 but going back even further historically. After weeks of threat of attacking Ukraine, it was both a shock and not so much when on 24th Feb. 2022; the world woke up to the fact that war has begun. That it came to the active act of war and killing shows the failure of global diplomacy and the failure of all international organisations formed to maintain peace. It has now become a game of tweets and bold announcements rather than proactive steps towards peace making. There was a time when threat of economic sanctions as given by the United States and many others to Russia would have worked, but not anymore.

The inability to stop Russia would force the U.S. and European leaders to rethink European security. “All sides would have to consider the potential of nuclear-armed adversaries in direct confrontation. These two responsibilities—robustly defending European peace and prudently avoiding military escalation with Russia—will not be compatible.”, ForeignAffairs.com.

France, Germany, Russia, and Ukraine have attempted since February 2015 to broker a stop in violence through the Minsk Accords. The agreement includes provisions for a cease-fire, withdrawal of heavy weaponry, and full Ukrainian government control throughout the conflict zone. However, all efforts to reach a diplomatic settlement have been unsuccessful.

“The crisis in Ukraine began with protests in the capital city of Kyiv in November 2013 against Ukrainian President Viktor Yanukovych’s decision to reject a deal for greater economic integration with the European Union. After a violent crackdown by state security forces unintentionally drew an even greater number of protesters and escalated the conflict, President Yanukovych fled the country in February 2014.” as reported by Global Conflict Tracker.

After that “in March 2014, Russian troops took control of Ukraine’s Crimean region, before formally annexing the peninsula after Crimeans voted to join the Russian Federation in a disputed local referendum. Russian President Vladimir Putin cited the need to protect the rights of Russian citizens and Russian speakers in Crimea and southeast Ukraine. The crisis heightened ethnic divisions, and two months later pro-Russian separatists in the Donetsk and Luhansk regions of eastern Ukraine held a referendum to declare independence from Ukraine.”, Global Conflict Tracker. Thousands of people have been killed since 2014 in the Ukraine-Russia conflict.

President Putin argues that “his goal was to protect people in Ukraine subjected to bullying and genocide and aim for the “demilitarisation and de-Nazification’ of Ukraine. There has been no genocide in Ukraine: it is a vibrant democracy, led by a president who is Jewish. Putin has frequently accused Ukraine of being taken over by extremists, ever since its pro-Russian president, Viktor Yanukovych, was ousted in 2014 after months of protests against his rule.”, BBC. This false narrative of a Ukraine seized by fascists in 2014 has been spun regularly on Kremlin-controlled TV. Mr Putin has spoken of bringing to court “those who committed many bloody crimes against civilians”. BBC.

“In April 2016, NATO announced that the alliance would deploy four battalions to Eastern Europe, rotating troops through Estonia, Latvia, Lithuania, and Poland to deter possible future Russian aggression elsewhere in Europe, particularly in the Baltics. These battalions were joined by two U.S. Army tank brigades, deployed to Poland in September 2017 to further bolster the alliance’s deterrence presence.”, Global Conflict Tracker. But we can see none of these steps have been able to resolve the issue.

It is not just the physical war which can cause damage, in this digital age multiple cyberattacks have been launched on Ukraine by Russia which can prove as damaging as physical attacks in terms of the economy of the country, people’s data privacy and freedom of speech, etc.

Many policy analysts believe “the price of a full-scale war in Ukraine would be punishingly high for the Kremlin and would entail significant bloodshed… a war could endanger Russia’s economy and alienate the public. It could bring NATO troops closer to Russia’s borders, leaving Russia to fight a Ukrainian resistance for years to come.”, Foreign Affairs. But, Putin’s cost-benefit analysis seems to favour upending the European status quo.

Putin decisions are not only focused on Ukraine, there is a much bigger agenda behind, it seems. He has “claimed modern Ukraine was entirely created by communist Russia and is now a puppet state, controlled by the West. He has also argued that if Ukraine joined Nato, the alliance might try to recapture Crimea. But Russia is not just focused on Ukraine. It demands that Nato return to its pre-1997 borders. Mr Putin wants Nato to remove its forces and military infrastructure from member states that joined the alliance after 1997 and not to deploy “strike weapons near Russia’s borders”. That means Central Europe, Eastern Europe and the Baltics. In President Putin’s eyes, the West promised back in 1990 that Nato would expand “not an inch to the east”, but did so anyway. That was before the collapse of the Soviet Union, however, the promise made to then Soviet President Mikhail Gorbachev only referred to East Germany in the context of a reunified Germany. Mr Gorbachev said later “the topic of Nato expansion was never discussed” at the time.” BBC news.

If Russia achieves its political aims in Ukraine by military means, Europe will not be what it was before the war. The sense that the European Union or NATO can ensure peace on the continent will be a lost thought. Instead, security in Europe will have to be reduced to defending the core members of the EU and NATO.

Condemnation of Russia’s act came from many parts of the world, from the U.S. and Europe, but from South Korea, Australia and beyond — and many governments readied new sanctions. Even friendly leaders like Hungary’s Viktor Orban sought to distance themselves from Putin. But the question that needs to be asked is, is the verbal condemnation enough? But starting a world war does not seem to be an option either? Then what can be done? In my opinion, a solution can only be reached when all the parties want to come to the table to talk to find a mutual solution. But is seems that the world is divided more than ever.

We have just come out of the pandemic; most countries are still dealing with the shock and effect of the past two years. While dealing with economic issues at the home front, do countries even have the time and resources to be active at the global front? Will personal benefits reign over how the decisions will be taken? The crisis is much bigger than just two countries and whether or not we know it yet, it would come to affect all of us. The global order depends on the outcome of this moment in time.