What Does Integration Bring to Europe’s Economy? 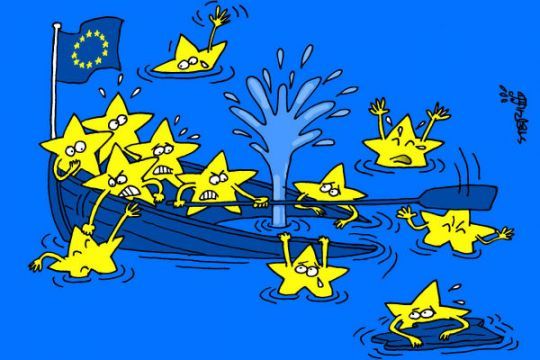 The “New Europe Mode” is an ideology that downplays the racial differences among European countries and focuses on economic, social, and democratic political development. It is the core value that the European Union is standing for. However, after 70 years of marching, the EU and the “New Europe Mode” are facing a critical challenge that may completely deny the fundamentals they rely on.

There is no doubt that Ukraine’s pro-West stance is the bane of the brutal war. While international audiences may pay much attention to NATO’s attraction to the former Soviet states, the interest of the EU is seldomly known by people. Simply put, the EU and the “New Europe Mode” means money and social welfare for the former Soviet states. And this is especially true for Ukrainians who have been inflicted with economic recession, corruption, bureaucracy, and violence for years.

To further understand why Ukraine, along with other former Soviet states, is so obsessed with the EU, we need to retrospect what integration means for Europe’s economy.

The Most Successful Attempt of Integrating Europe

After WWII, Europe realizes the peril of nationalism and ethnocentrism. By deemphasizing their racial differences, European countries can largely disregard the historical distrust and hatred of each other, and thereby the motivations for waging wars largely disappear.

Moreover, the expansion of NATO and America’s security promises enable European countries to curtail their defense expenditure. And the saved money is repurposed to develop the economy, social welfare, and democratic politics.

The dominance of the US dollar and the fast-growing economy in the Asia Pacific region, especially the rise of China, makes European countries more convinced to build an integrated Europe to secure their positions in the world because none of the European countries can counter the economic influences from the United States and the Asia Pacific region.

All these things catalyze the birth of the Europe Coal and Steel Commission and, later, the European Union. The EU members are proud of this mode, and European countries outside of the EU appreciate this mode.

Early in 19 century, the renowned French writer Victor Hugo had portraited the “United States of Europe.” He wrote that

“A day will come when your arms will fall from your hands…all you nations of the continent will merge, without losing your distinct qualities and glorious individuality, in a close and higher unity to form a European brotherhood.”

Founded in 1951m the European Coal and Steel Community (ECSC) is the first “hyper-sovereignty” institution in European history and also the prototype of the European Union. The ECSC was proposed by France, West Germany, Italy, Netherland, Belgium, and Luxemburg.

After the success of the ECSC, European countries tried to go further. In 1957, the six-member states of the ECSC signed the Treaty of Rome to establish the European Economic Community (EEC). Cooperation among member states was no longer limited to coal and steel but expanded to anything related to heavy industry.

The Treaty of Rome was also dedicated to establishing a customs union for industrial goods, with free flow of various factors of production, such as goods, capital, and labor, among the member states.

From ECSC to ECC, European integration laid a good foundation for the economic revival after WWII. Although America’s Marshall Plan was over in 1951, the European economy did not stop soaring.

Many European historians believe that from 1950 to 1973, a period of more than 20 years, was the golden age of Western Europe’s economy, during which Western Europe’s annual GDP growth rate averaged 4.8%, which was even better than that of the United States. Besides, the inflation and unemployment rates in Western Europe also remained low.

The EEC’s eye-catching economic performance has drawn other European countries’ attention. After applying for it three times, the UK finally joined the EEC in 1973. In the 1980s, the number of EEC members had come to 12, with Denmark, Greece, Portugal, and Spain joining in.

Starting from 1989, the world and Europe have been through a series of significant historical moments. The fall of the Berlin Wall, the wane of Communism in East Europe, and the collapse of the Soviet Union gave European integration a shot in the arm.

At the end of 1991, the EEC adopted the Treaty of the European Union, also known as the Maastricht Treaty, which came into force two years later. In 1993, the EU was formally established, and European integration was approaching its climax.

In 1995, Austria, Finland, and Sweden joined the EU. In the 21st century, the EU opened the door to Central and Eastern European countries. In 2004, the EU had its most significant expansion ever. 10 Central and Eastern European countries, including Poland, the Czech Republic, and Hungary, joined the EU in the same year, followed by Romania and Bulgaria.

With the accession of Croatia in 2013, its 28th member state, the EU had reached its peak since its establishment, with a population of more than 440 million and an area of more than 4 million square kilometers.

Although the United States and China surpass the EU’s GDP, its third position is well secured. It has powerful technological advantages and is the leader in many fields. For example, the EU is monopolizing the mask aligner that the US and China long for, a virtual machine to manufacture semiconductors.

The Haunting National and Ethical Sentiments

Over a hundred years ago, Karl Marx wrote in Communist Manifesto that “A specter is haunting Europe — the specter of Communism.” This sentence is still valid if replacing “Communism” with “nationalism and ethnocentrism.”

With more countries with different cultures, politics, and economic structures joining, integrating Europe becomes harder and harder. Many people on social media believe that the EEC is the golden time for European integration.

Weaker and smaller members, especially the former Soviet states, usually have different thoughts from significant powers in the EU, such as France, Italy, Germany, and the UK. As a result, the considerable forces feel burdened by new members while new members feel disrespected by the major powers. Brexit is a great example to prove this predicament.

The outbreak of the European debt crisis in 2009 made the EU deeply reflect the structural contradiction in the beautiful dream of European integration. The so-called “North-South Contradiction” emerged. Namely, countries in Northern Europe, such as Germany, Sweden, and Denmark, stick to financial discipline. In contrast, the countries in southern Europe, such as Italy and Greece, are more enthusiastic about borrowing money and expanding debts. Later on, Portugal, Italy, Ireland, Greece, and Spain were called “PIIGS.”

In 2010, the EU adopted a €750 billion bailout plan to set up a “European Stability Fund” to rescue those countries in financial trouble. Meanwhile, the EU required those countries to adopt a more rigorous financial plan, which means a cut in social welfare and a possible economic recession. Naturally, this would cause the people in those rescued countries to grudge. On the other hand, people of significant powers like German, French, and British were also complaining that their money had been used to help those “indulgers.”

Greece had a fiscal deficit of 3.4% when applying for the EU. This number did not comply with the requirements of the Maastricht Treaty. The Greek government also worked with Goldman Sachs to play some financial games and make its economic statistics look pretty. Eventually, Greece made it to the EU. Similar situations also happened to other EU members that were in financial trouble.

Immigrants are another structural problem of the EU. The number of East European countries is about half of the total EU members. When the door of the EU is opened to them, a tremendous number of immigrants can travel, live, and work in West Europe. The immigration issue became a significant trigger for Brexit in 2016.

According to the data from the British government, ten years before 2016, there were only 250,000 workers from Eastern Europe on the British territory. But in 2016, this number was fourfold. British citizens not only needed to pay for the fee of settling the immigrants but also needed to accept the immigrants to take their jobs.

Since the European debt crisis in 2010, the European economy has experienced several recessions. However, it has also shown great tenacity always to recover using concrete or binding actions. This proves that the EU still has a strong enough central government.

Moreover, as mentioned before, the EU is leading the heads of several science and technology fields. Its higher education institutes are still one of the attractive destinations for international scholars and students. Hence, in a very long time, the EU will still be a competitor of the United States and China.