Why We Need To Change The Way We Debate 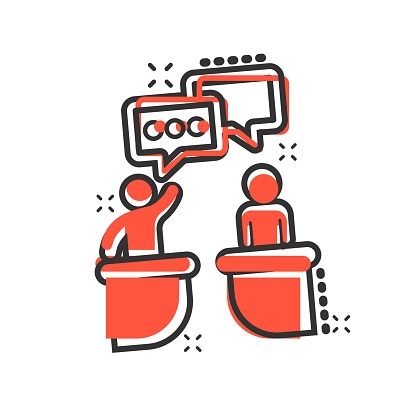 Debates on this planet have existed as long as agriculture, arts, and conflict. Viewed as an esteemed form of communications, debates have resulted in the expansion of rights一unveiling intricate positions and nuances amongst the most controversial of topics. In comparison to interpersonal violence and war, debates are perceived to be the utmost efficiency in conflict resolution. A war of words not only connotes respect but also prompts the debaters—and their audience—to critically engage with the discussion at hand.

In a politically polarized world, debates have led to various outcomes. With the advent of the internet, debates can be commercialized and thus profitable. The commercialization of debates incentivizes pride at the expense of accuracy and empathy. Social media only further exacerbates these issues.

Sites like YouTube, Twitter, and Tik Tok are home to content creators on the political right, center, and left. Each engages in discussions about race, gender, sexual orientation, and mental health. Due to the popularity of contrarianism一hot takes, everyone is searching for the best hot take, no matter how discriminatory they are.

Consequently, people feel the need to combat these hot takes, deconstructing each talking point and exploring the harmful rhetoric behind each opinion. One would think that this call and response would open up good faith discourse. However, the world of social media does not live and die by good faith criticism. Social media is a conundrum of good faith criticisms drowning in a sea of performative politics and outright far-right wing sympathizers. One would presume that such contrasting opinions contained on social networking sites would increase the likelihood of debates. Yet, the debates held on such sites are anything but productive.

Wagatwe Wanjuki is an anti-rape activist and feminist theorist who extensively explores the pitfalls of social media debates on Tik Tok. Stitching onto an existing post calling for a debate, Wanjuki asserts that while people are debating in hopes of amplifying inclusivity and equity, there are other content creators with increasingly damaging content一white supremacist, transphobic, homophobic rhetoric that end up being platformed through debates. Consequently, alt-right influencers have seen an unprecedented rise in popularity as an attempt to stick it to the “snowflake” liberals. Moreover, misinformation and disinformation on Tik-Tok have even persuaded the self-proclaimed bleeding heart liberal to perpetuate harmful stereotypes and rhetoric about survivors of domestic violence, racism, and transphobia.

Instead of platforming like-minded individuals who can articulate worthwhile viewpoints to various audiences, many content creators juxtapose their thoughts with extremist beliefs. While this may seem innocent in hindsight, the act is nothing more than virtue signaling. Debating extreme bigots only makes a spectacle out of extreme bigotry—rather than deconstructing harmful thoughts. No matter the intent, the impact does not lead to a newfound understanding of social justice, nor does it alleviate any harm. These debates only position one side as the most virtuous and the other as the villain.

Enough audience members and discourse engagers alike can differentiate good faith criticism and inquiries for elaboration. The performative nature of online and real-life debates is intrinsically tied to who and what thoughts are being platformed. Debating white supremacists, xenophobes, outspoken misogynists, homophobes, and transphobes do nothing more than provide a platform to spread their hateful rhetoric. Due to their devotion to their beliefs, the debate renders itself useless. Instead of persuading curious viewers to adopt more sustainable, equitable politics, these debates only give bigots more notoriety and thus more capital. Conservative politicians in search of a dependable, young base of voters notice these far-right influencers wreaking havoc on the internet and provide them with airtime, capital, and access to a much older, loyal right-wing base.

Rather than engaging in a back and forth match to see who can embarrass the other, the focus should be on worthwhile engagement with an audience of those willing to hear the other side. Left-leaning YouTube channels tend to present arguments through video essays, an example of infotainment. These videos are typically decorated with humorous lines alongside serious analysis, keeping viewers engaged and educated. That is not to say that left-leaning channels and their subscribers do not have their faults. They too are not immune to pervasive, oppressive systems. Their femininity, their transness, their queerness as well as their blackness can and have been used against them. Their points are often disregarded, and seen as too militant.

Black women and femmes on YouTube, for example, have been overanalyzed and underappreciation for their imperative contributions to modern leftist thought. Despite making groundbreaking concepts about the intricacies of masculinity, femininity, the history of racism in media, and constructive critiques of capitalism, they do not equate to the appreciation the other side has. YouTubers such as Tee Noir and Khadija Mbowe do not receive the same praise as white content creators ContraPoints and Lindsay Ellis.

All in all, leftist theorists and commentary channels provide a uniquely enjoyable, yet educational alternative to the heated debates many of us have grown accustomed to. Instead of scouring the internet for the latest alt-right figurehead to combat, these channels cultivate a following of their own and inform said subscribers with research and historical anecdotes. Content creators manage to attract new followers by incentivizing invigorating discourse and genuine change in opinion—rather than capitalizing off of an already polarized environment.

The way commentary channels contribute to discussion topics about race, gender, and capital provides people on and offline with another model of debate and discourse. One that does not aim to antagonize or perform but rather enlightening. Where all parties are willing to learn and improve for the better, rather than engaging in elitist tropes that serve one’s ego. The next time you get into a debate, question what prompted you to debate—- and most importantly, question the intentions of your opponent. Time spent arguing with stubborn rivals could best be channeled into having constructive conversations where both parties leave with worthwhile information.