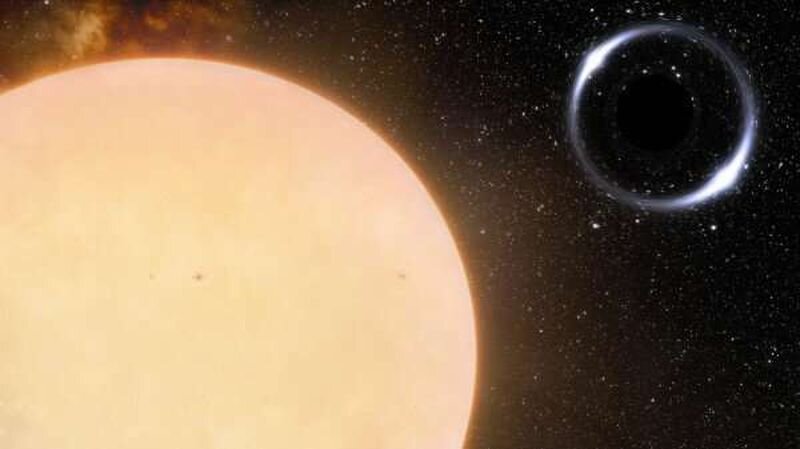 Astronomers have recently discovered a black hole in the Ophiuchus constellation, which means it is located approximately 1,600 lights years away from Earth. Making it three times closer than the last black hole found in the Monoceros constellation.

According to Albert Einstein's theory of general relativity, a black hole is, “when a massive star dies, it leaves behind a small, dense remnant core. If the core's mass is more than about three times the mass of the Sun, the equations showed, the force of gravity overwhelms all other forces and produces a black hole.” In essence, the gravity of a black hole is so strong that nothing, not particles or even light can escape from it.

This discovery was made by astronomers observing a sun-like star that was orbiting the black hole at about the same distance as the Earth orbiting the sun. Black holes are not easily found when dormant because they blend into their surroundings when not actively feeding. However, active black holes can be spotted by using X-rays as they shine brightly when consuming material from a nearby stellar companion, although this black hole is not active the astronomers were still able to spot its companion.

The Gemini North telescope was used to find the black hole, it is one of the twin telescopes of the International Gemini Observatory in Hawai’i and was operated by NSF’s National Optical-Infrared Astronomy Research Laboratory (NoirLab). This is the closest black hole to Earth found to date. The researchers who found the black hole named it Gaia BH1.

Kareem El-Badry, an astrophysicist at Harvard & Smithsonian and the Max Planck Institute for Astronomy, is the lead author of the paper describing the discovery. El-Badry said, “While there have been many claimed detections of systems like this, almost all these discoveries have subsequently been refuted. This is the first unambiguous detection of a sun-like star in a wide orbit around a stellar-mass black hole in our galaxy."

This discovery indicates that there are important gaps in our knowledge of how black holes form and evolve, and also suggests that there is still an unexplored population of dormant black holes.

There is still so much to be learned about this discovery, and astronomers say they expect to receive the next data from Gaia in 2025. El-Badry is hopeful and anticipates they will find more saying, “We think there are probably a lot more black holes closer than that…Just finding one … suggests there are a bunch more to be found.” This discovery has given us more insight into the universe and will help us to better understand the galaxy we live in.