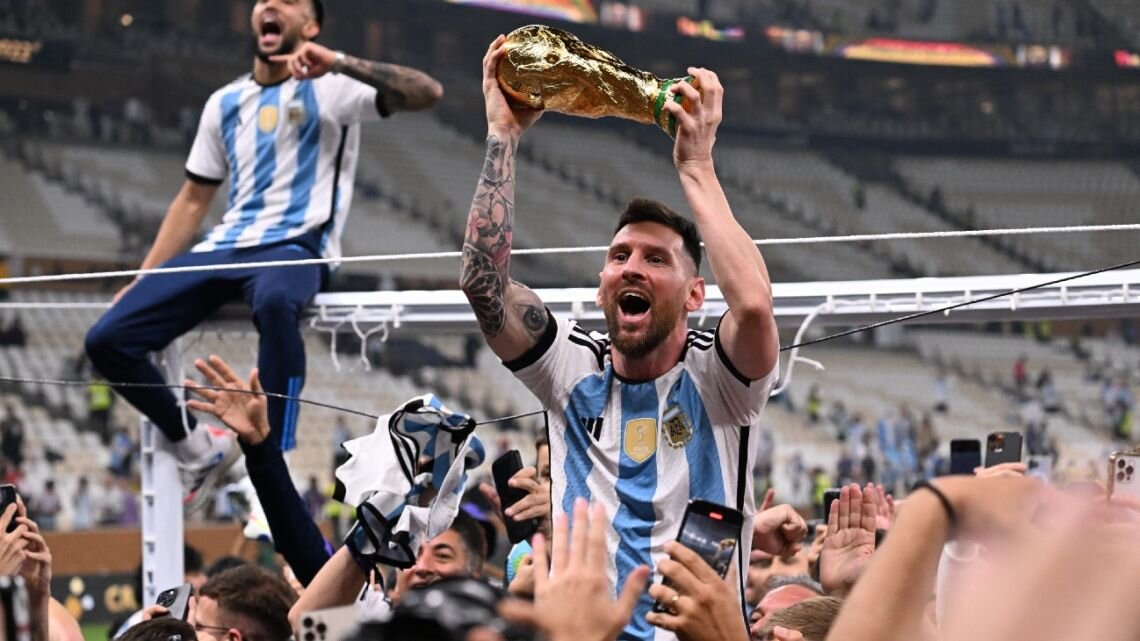 Argentina wins the FIFA Qatar 2022 World Cup after defeating France in penalty shootouts 4-2. Argentina and France drew 3-3 during regular and extra time. Messi 23’ (P), 108’ and Di María 36’ scored for Argentina, and Mbappé with a hattrick 80’ (P), 81’, and 118’ (P) for France. Named by the Latin American press as the best World Cup Final ever, it was thrilling to observe how both teams gave their all for every ball movement and ran until their feet could not do anymore.

The most incredible achievement of Argentina is they have normalized the extraordinary. Lionel Messi has always proven himself a specialist; he normalizes scoring, assisting, winning trophies, and breaking records in every aspect of any game. But every time a major championship is at stake, detractors and critics often question, “Where is Messi in the most important moments for Argentina?” After Sunday, December 18, 2022, there will be no questions, no doubts, and no critics.

In addition, Argentina has conquered three championships in a span of just 18 months, including the 2021 Copa America, the 2022 Finalissima, and now the FIFA Qatar 2022 World Cup. Leading the team to the most recent championship, Lionel Messi breaks several Argentina national soccer team records, including the all-time top scorer in the World Cups. Let’s have a brief look at his contribution to Argentina’s wonderful journey to the desired Golden Cup.

In the very first match, Argentina was unexpectedly beaten by Saudi Arabia. After Messi’s penalty goal, the Argentinians were surprised by the physical power of the forwards scoring two goals Al-Shehri 48’ and Al-Dawsari 53’, giving Saudi Arabia a historic win over a world champion. This match marks Argentina as the second team to lose the first game and then win the World Cup, after Spain in the FIFA World Cup 2010 in South Africa.

Before the second game, doubts arose, and the press was pressuring Argentina. Messi asked their supporters to have confidence in the team, and that they would not let anyone down. Indeed, Argentina beat Mexico with Messi 64’ and Fernandez 87’ scoring outstanding goals to open chances for the knock-out stage.

In their final match in the group stage, they faced the top scorer of Poland, Lewandowski, who needed a good result against Argentina to lead his team to the next round. Messi missed the penalty kick, but Argentina was saved by MacAllister 46’ and Alvarez 57’ goals to defeat Poland. This helped Argentina qualify for the next round as the winner of the group.

Round of 16: Paving The Way

Australia was their next rival. With Messi's and Alvarez's goals at 35’ and 67’ respectively, the Argentinian team was having total control over the game. However, an unfortunate own goal by Fernandez at 77’ put Australia back in the game. In the end, Argentina was able to regain control and concrete the passage to the quarterfinals.

Everything started well for Argentina, with Molina at 35’ and Messi at 73’ (P) putting Argentina ahead. Nonetheless, the Netherlands was the second national team to show how vulnerable Argentina’s defense was. With a header and a strategic free kick, Weghorst at 83’ and 90+11’ equalized for the Netherlands. The draw led both teams to the penalty shootout where the Argentinian goalkeeper Emiliano Martinez was a key player to obtain the win.

Here they faced a huge rival, Croatia, the runner-up of World Cup 2018 in Russia and third place in World Cup 1998 in France. The audience observed three goals by Argentina: Lionel Messi’s penalty kick at 34’, Alvarez’s goal at 39’ after a long run from the middle field, and his second one at 69’ from a magnificent assist by Messi after dribbling and dominating the Croatian center back Gvardiol. Thanks to the most iconic play by Messi in World Cup history, an uncontestable 3 – 0 for Argentina certified their presence in the World Cup Final.

The Greatest Final Ever Played

Argentina surprised France with the left winger Angel Di María playing as a starter. France’s coach, Didier Deschamps was unable to react on time. Di María dribbled Dembélé and when entering the penalty area, the latter had no choice but to trip the former. The referee did not hesitate to whistle and point to the penalty spot. Messi took that penalty and scored the first goal.

Later, Messi received the throw-in and rapidly passed to Alvarez. The ball continued to pass to MacAllister and ended at Di María’s feet, who then bounced the ball properly and beat the France goalkeeper Hugo Lloris. Argentina was 2 – 0 ahead of France in just 36 minutes.

Deschamps made substitutions by replacing the forward and winger Olivier Giroud and Ousmane Dembélé for Randal Kolo Muani and Marcus Thuram. The new France was trying to impose their game through physical advantages, and the speed of Kolo Muani was enough to force the Argentina center back Nicolas Otamendi to commit a foul inside the box. The France superstar Kylian Mbappé scored from the penalty spot, and just one minute later, receiving a long ball from Kingsley Coman, Mbappé volleyed to equalize for France.

The game ended 2 – 2 after full-time, and the champion was still pending to be defined. Argentina and France played an extra 30 minutes, in which Messi scored after a save from Lloris. Just 10 minutes later, Gonzalo Montiel raised his arm to block Mbappé’s shot. As another penalty was called for France, Mbappé did not miss the opportunity to equalize for France. The extra ended with 3 – 3, meaning the winner would be decided from the penalty shootouts.

Argentina had Emiliano Martinez; a goalkeeper known for being a penalty specialist. He responded by blocking Kingsley Coman's penalty and playing mind games with the young player Tchouámeni. Meanwhile, Messi, Dybala, Paredes, and finally Montiel scored for Argentina, crowning them as World Champions.

All of Argentina’s coaching staff was crying. Players were crying, fans were crying. It was emotive as if Argentina just dropped the hugest load on their backs forever. With this championship, Messi has completed the most outstanding page of honors ever:

With this championship, Messi has climbed to the top of the Olympus of Football. He has normalized football play and broken all-time records in goals and assists. Moreover, Messi has been crowned as the most complete player ever; no championship has resisted Messi. Who is greater than Messi in football now?

The Argentina staff said the world champions will be arriving in Buenos Aires until December 20, 2022. Argentina is with open arms waiting for their heroes.