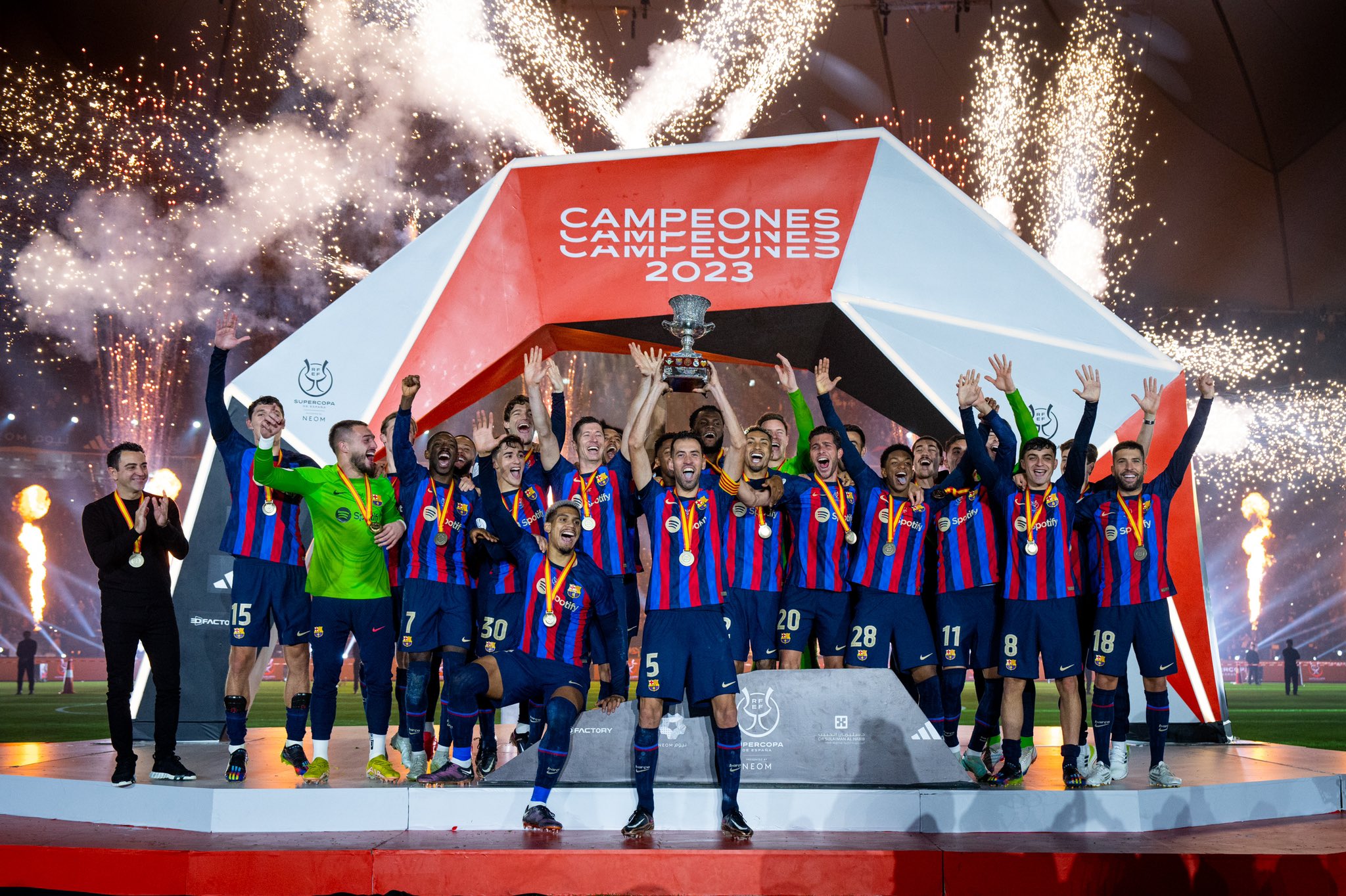 FC Barcelona wins the Spanish Super Cup against Real Madrid with a dominant 3-1. Xavi Hernandez wins his first trophy as Barcelona head coach and the club wins its first trophy without Messi after 18 years.

Sunday, January 15 in Riyadh, Saudi Arabia Barcelona played outstanding football controlling every aspect of the game and dictating the tempo and attacks against the goal defended by Courtois.

Gavi was dangerous in every intervention, in minute 12’ a run-in front of the penalty box left Lewandowski with the opportunity to score, Gavi passed the ball to the Polish striker who shot but Courtois stopped, the rebound favored Barcelona but the 19-year-old left-back Alejandro Balde missed the shot.

Real Madrid chose to attack the left lane, defended by Ronald Araújo, Vinicius Júnior was the main winger attacker, but the first dangerous play came from Ferland Mendy who centered, and Benzema’s header was off for a few inches, unfortunately for the 2022 Golden Ball winner.

In minute 33’ Barcelona’s pressure left alone Antonio Rüdiger, who committed a terrible mistake when passing the ball to Camavinga, Barcelona defensive midfielder, Sergio Busquets anticipated the ball, and Dembélé triangle with Pedri and Lewandowski who habilitated Gavi who crossed Courtois with an accurate shot. Barcelona was up 1-0 against Real Madrid.

The second goal came from the ball out of Andreas Christensen, who passed to Busquets who in turn passed Frenkie De Jong at first touch, De Jong in fits and starts enabled Gavi who in a run crossed the ball to the far post where Lewandowski sentenced the 2-0.

In the second half, Madrid did not seem to have the capacity to react. Alejandro Balde anticipated a ball that seemed to have been won by Real Madrid winger Carvajal and ran down the right wing until it passed Dembélé who shot on goal but was parried by the foot of the Belgian goalkeeper, Courtois.

Gavi was intractable, he didn't seem to get tired of recovering balls and fighting each of the divided balls. He stole a ball from Militao and passed it to Lewandowski who controlled it, then wait that Gavi would be open up on the right side to enable it, in turn, Gavi raised his head and passed the ball to Pedri who at the far post just pushed the ball to declare the 3 -0 in favor of the Blaugrana al 68’.

Ancelotti moved the bench and brought in the skilled Brazilian winger Rodrygo, who gave his first scare to the goal defended by Ter-Stegen after taking a ball and controlling speed from midfield to shoot on target accurately, but Ter-Stegen He was prepared and focused and rejected the shot.

Real Madrid's discount arrived at minute 90' + 3 through Benzema who shot the goal after Ter-Stegen's rejection of the center of the area, a goal that served to make up the result since it was too late for a reaction from Los Blancos.

This is the second time that Real Madrid has lost a Super Cup final against Barcelona, the first was in 2011 when those led by Jose Mourinho lost 5-4 on aggregate against those led by Josep Guardiola, on that occasion Super Cup was still played round-trip matches.

Barcelona won its first trophy since the 2021 Copa del Rey. Xavi Hernandez finally presents a trophy to the Barcelona museums, his first as manager of the Blaugrana team. Gavi was named man of the match for his goal and two assists.

This is the first trophy that Barcelona has won without Messi in this century, the last championship won without Messi was La Liga in 1998-99 when the team was led by the Dutchman Louis Van Gaal and its top star was Rivaldo.

There Will Be ‘El Clasico’ In Copa del Rey Semifinals.