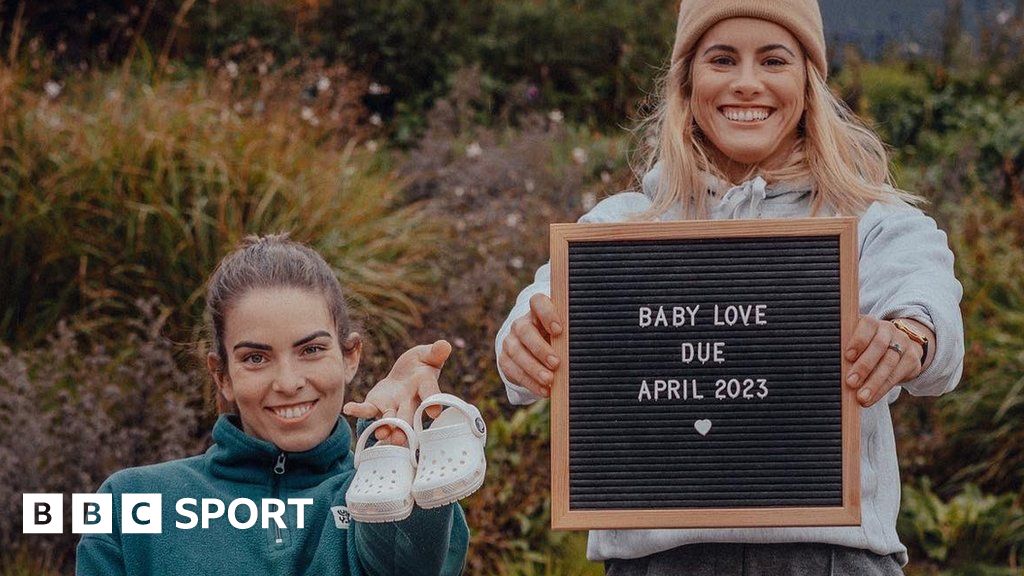 are expecting a baby due in April next year, following their engagement two years ago.

They told BBC, “So many people that we haven't even met before are reaching out and saying 'congratulations, A baby seems to bring light to things, and any time something positive happens, I really do think it's important that it's celebrated. We're really grateful we can offer a little something out into the world.”

“This is going to be our last Christmas without pooey nappies and vomit… we're thinking of what we do to make the most of it!”

As same-gender parents, there is plenty of questions people are asking them, but they are preparing for parenthood and hope to help others like them, welcoming curiosity.

“The representation is getting better and better- Things keep popping up on my Instagram of children who come from all sorts of different families, whether it's single-parent or same-sex.” Smiles Love as she recounts it.

“It's just great, and more stuff should be like that because children don't mind.”

“They just want to be loved and looked after and treated with kindness - and hopefully, we'll show the world that, whoever you've chosen to start a family with, if you can give a child those things, that's the most important thing.”

“There are so many examples now of women who are taking time away to have children,” She adds.

“I think nowadays, the sporting bodies are working out how to make it work so that kids can come on camps and tournaments, and not be a hindrance - but that being a mum and being present with your child can actually make you a better performer.

"That's the sort of area in sport that's going to adapt or change. At least, I hope that it is!"

"It's been something we always talked about once we'd got to a certain phase of our relationship," admits Laurie Williams. “We're in a really good position to start a family, but when you're in a same-sex relationship, it can take lots more planning, potentially. We had to go down the path of IVF and knew it could take quite a lot of time, but fortunately for us, it worked first time. It was still a lot of hard work, and it wasn't an easy journey to go through, but it happened nicely for us in terms of timings.”

Robyn Love was pretty playful about the situation when she told the BBC, “First of all, you've got to do rock, paper, scissors for who is going to go first between you.”

“-And it was a natural choice for it to be Laurie - it felt right between us. But I was certainly overwhelmed by the amount of options available. We were very fortunate that we got the NHS route (For IVF treatment), so we're really grateful for the opportunity.”

They recall the timing of when they first found out, having just told a handful of friends and family just in case it didn’t work for them the first time.

“It's a scary thing. There are a lot of expectations and things Laurie has had to put her body through - and if, at the end of it, she didn't become pregnant, it could be quite a rollercoaster.”

“For both of us being athletes, we never expect success, and we don't want to celebrate until that finish line is crossed.”

“I was at the Commonwealth Games in Birmingham, representing Scotland,” Love recalls.

“Laurie and I met to get a coffee and were just looking for somewhere to do the pregnancy test where we wouldn't be interrupted, to be honest.”

“So we found a toilet in Morrisons supermarket, and that's where we found out… and it was a bit surreal, bizarre! You know, I'm at the Commonwealth Games, going through this crazy experience, so to have that positive result on that day was just fantastic.”

In terms of MOGAI+ people in UK sport, Love and Williams are alongside Hannah Davis, Lloyd Wilson and Daniel Jervis, as well as Olympic Swimmer Tom Daley and his husband, who have a young son.

“Representation is huge; I think, for people to be out there, whether it’s on social media, whether it’s in community places, to realise there are people out there, who are like you, who have had similar experiences to you, It’s a relief…” Laurie tells viewers in a video from   August 2022 on BBC sport.

Loyd Wilson tells BBC sport, “We know that the LGBTQ+ community in football is under-represented. Unless there are more visible key figures in football, across the world, then we are unlikely to see changes…”

Hannah Wilson, who plays Union Rugby, admitted, “I think it’s nice that there are other people who are similar to us or experiencing the same things as us. So representing who we are and making sure that other people can find comfort and inspiration from us (is important.)

“I don’t really have time for sort of, negative comments. If you’ve got the time and effort to write ‘Who cares?’ on social media, then clearly you care. If I think it’s affecting a lot of people, I normally just block, delete or report them to social media.”

According to FFLAG, since March 2019, “ Figures released by the Office for National Statistics (“ONS”) show that in 2019 there were 212,000 same-sex families in the UK, having increased by 40.0% since 2015. However, the most recent statistics for the number of same-sex couples raising children remain those from 2013, when 12,000 couples were doing so.

In March 2015, government statistics for the previous year showed that, on average more than 9 children per week were being adopted by LGBT parents, representing 14% of all adoptions.”

It seems, as always, Representation does, in fact, matter, and people do care. There are many support groups in England as a whole, with groups of different religions, such as Parents of Jewish Gays and Lesbians, who have been a support group since 1996 in London, and even a FFLAG support group in Wales, Scotland, and in the Southwest.