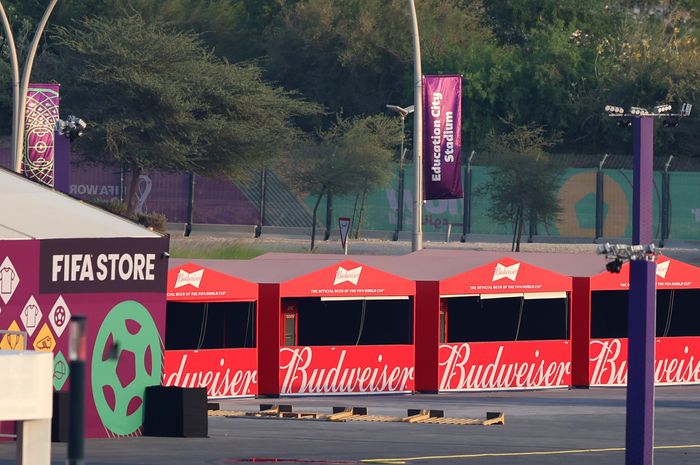 With just two days left to kickstart the 22nd edition of the FIFA World Cup, the soccer governing body, FIFA, confirmed that there would be no alcoholic drink permitted in the eight stadiums which will host the 64 matches.

However, Budweiser, a major FIFA sponsor, and beer brand, was confirmed to sell beer within the ticketed area near the eight stadiums before and after every game.

The source added, "the large number of fans attending FIFA this year mainly comes from the Middle East and South Asia, where alcohol does not play an important role in the culture. The decision was made thinking that for many fans, the presence of alcohol would be uncomfortable and ruin the enjoyable experience."

FIFA's announcement on Friday mentioned that non-alcoholic beer would be sold in the World Cup stadiums. At the same time, alcoholic beverages like champagne, wine, whiskey, and others will be served in luxury hospitality areas of the stadium.

However, since most ticket holders do not have VIP access, they can purchase alcoholic beers at the FIFA Fan Festival, a party with live music and interactive activities.

"After discussions with the host country and FIFA, a decision has been made to continue the sales of alcoholic drinks at the FIFA Fan Festival, other fan destinations and licensed venues; while strictly removing sales of beer from the stadium perimeter," outlined FIFA's announcement. With such tight measures, "fans can decide where they wish to go in the stadium without feeling uncomfortable, which was not the case previously," said the anonymous source.

Qatar, a Muslim country with strict regulations on alcohol, has also enforced limits on the purchase and consumption of alcoholic drinks. Moreover, visitors outside Qatar are banned from bringing alcohol into the country and even purchasing it from the airport's duty-free section.

The FIFA statement also extended gratitude towards AB InBev, owner of Budweiser, for their continued support and understanding. Budweiser has been a World Cup sponsor since 1985. For FIFA 2022, AB InBev launched its most extensive campaign with activities for Budweiser and other brands in over 70 markets and at 1.2 million restaurants, bars, and retail outlets across the globe.

According to the New York Times, Budweiser paid around $75 million for its sponsorship with FIFA. Initially, when the FIFA announcement was released, the official Budweiser Twitter account summarized the situation with a tweet, "well, that's awkward," which has been deleted. Later, an AB InBev spokesperson commented on the ban, "some of the stadium planned activations cannot move forward due to situations outside our control."

The last-minute announcement indeed gathered criticisms across the board. Ronan Evain, the executive director of Football Supporters Europe, called the ban on alcohol "extremely worrying." Similarly, Ben Peppi, the head of sports services at JMW Solicitors, said the move is "hugely damaging" for FIFA.

"Now, brands will need to move carefully around FIFA in future tournaments. Because if they can say no to a brand two days before the biggest football tournament and breach the contract, it will not give security to any future brands," Peppi told CNN Sport.

The Football Supporters Association (FSA) too critiqued the timing of the decision. "Some fans like beer and some do not, but the real concern here is the last-minute U-turn in decisions which signifies a major problem – lack of communication and clarity," said an FSA spokesperson.

He further added, "if they can change their minds at moment's notice, with no explanation, supporters will have understandable concerns on whether the promises on accommodation, transport, and cultural issues will be fulfilled or not."

Although this is Qatar's most significant backtrack, it was not the first. Last weekend, Qatari organizers surprised AB InBev with a new policy that insisted on moving beer stalls to less visible locations in the stadium.

The Bribery Game: Did Qatar Purchase Fans For The 2022 World Cup?

Do We Play For Duty Or Honour? : The FIFA World Cup