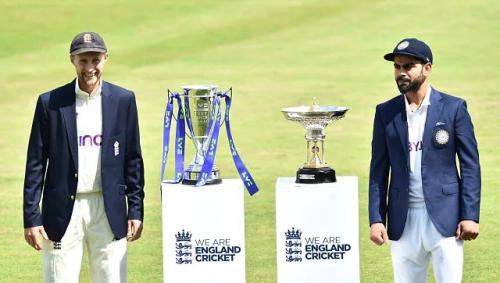 While the question of who will draw the first blood circulated among the cricket fanatics, the rain came as an uninvited guest and washed away the victory from the hands of the India and England cricket team. Amid the Tokyo Olympics 2020, the much-awaited India VS England test series commenced earlier this week. After the loss against New Zealand in the maiden ICC Test Championship, the Virat Kohli-led side regrouped to display their might against Joe Root’s men in a contest for the Pataudi Trophy. The five-match Test series also marked the opening of the second world test championship.

Scheduled from August 4 to August 8, the first test match kicked off at Trent Bridge, with the home team winning the toss and opting to bat first. In what was considered to be a stable start, the hosts held a strong position at 138/3. However, the excellent pace of Jasprit Bumrah with a four-wicket haul, Mohammed Shami with three wickets, and Shardul Thakur picking up a couple helped team India to tumble the England batting order in the third and the final session. With the skipper Joe Root scoring 64 off 108 balls, the home team was bowled out, for a low total of 183. India also finished the day on a high, at 21/0 with Rohit Sharma, and KL Rahul at the crease.

Rain and Rahul highlights of Day 2

The evening session was completely washed away, due to heavy rains. While the covers were drawn and the fans left the stadium, India posted a total of 125 for four on day 2. KL Rahul was glued to the crease, scored a half-century, and was unbeaten at 57. Though the opening partnership of 97 runs between Rahul and Rohit gave a strong start to India, wickets of Cheteshwar Pujara, Virat Kohli, and Ajinkya Rahane precipitated in quick successions. James Anderson’s fierce pace gave England hope to regain the match under its control.

While the rain continued its play in Nottingham, day 3 witnessed India’s slight resistance towards the England bowlers. A five-wicket haul from Ollie Robinson helped England to bowl India out for a total of 278. KL Rahul fought before he fell victim to Anderson's pace and scored 84 runs off 214 balls. However, Ravindra Jadeja, who came to the crease at 6 down, showed his class and put the opposition under pressure by scoring 56 off 81 balls. In the lower order, Jasprit Bumrah and Mohammed Shami partnered to put on 33 off 26 balls before India were all out for 278. Anderson, with a four-wicket haul, became the third-highest wicket-taker in tests.

With a lead of 95 runs, England was put to bat and was greeted with rain again. And the stumps were called off on day 3 with the hosts at 25/0.

With 70 runs behind, England started on a good note to fight the Indian pace attack. Skipper Joe Root and Sibley, with a third-wicket partnership of 89, runs helped England extend their lead. Root scored his 21st test match hundred and helped his team cross the 300 marks.

However, when the second new ball was introduced, Jasprit Bumrah took control of the game by dismissing Root, Sam Curran, and Stuart Broad and claimed his five-wicket haul. England was dismissed for 303 in their second innings and set a target of 209 for India to seal its victory in the first test match.

India, in their second winnings lost their KL Rahul early when he was struck down by Stuart Broad. India ended the day scoring 52/1 with another 157 runs away from the win.

On a much-anticipated final day, the fans of either team hoped for a victory, but rain played a spoilsport to wash away the entire session. Inspections were done consistently, early lunch was declared in the hope to resume the match once the rain stopped. The match was abandoned due to bad weather with 157 runs to win for India. The Trent Bridge cricket ground was drenched under the wrath of the rain gods while the teams eyed for a win in the upcoming match on August 12th.