England lifted the white ball trophy of the ICC T20 men's cricket world cup at Melbourne Cricket Ground, in Australia on Sunday. The team celebrated its second win of the title after beating the Pakistan team by 5 wickets.

Team England has registered its second continuous victory after the ODI championship in 2019. With this, the team has become the second team to claim the title twice in their history along with West Indies having won the title twice.

England won the toss and decided to field first. Here both the teams were in good form and the Pakistan team set a target of 138 runs for a win. Once again it was Ben Stokes whose 52 not out led the team to chase the target and reach to victory, while Sam Curran’s magnificent bowling paused the opponent team’s runs at a comparatively low score.

After the match, Ben stokes gave the credit to bowlers for the victory. He said, “Adil Rashid and Sam Curran won us the game, it was a tricky wicket and one that you never felt in, so to restrict them to 130-odd bowlers you have to take a lot of credit for that.”

He also praised Ireland’s team for their performance against England and how that defeat made them learn a lesson. He said, “With that (defeat to Ireland) being so early in the competition we had to address it, the best teams learn from their mistakes and not let it affect them.”

England's team is being praised for their all-rounder skills and great performance all over social media. The Indian cricketer Mohammad kaif said in a tweet that no team can win a trophy by just bowling or batting, England won because they have “batters, spinners, pacers, fielders, and luck”.

Although Pakistan lost the match their struggle and strong opposition won the heart of their fans. Team captain Babar Azam congratulated the winning team and appreciated the performance of his team members. He said, “I just told the boys to play our natural game, but we fell 20 runs short and the boys fought well with the ball. Our bowling is one of the best attacks in the world. Unfortunately, Shaheen’s injury put us off, but that’s part of the game.”

Shaheen Afridi is a fast bowler in the Pakistan cricket team who got a knee injury while fielding during the T20 world cup on Sunday. Although he was originally injured while fielding against Sri Lanka during a Test match in Galle in July and had returned for the world cup matches after a rehab. Many cricket fans believe that Pakistan could have won the match if Shaheen hadn’t been injured. 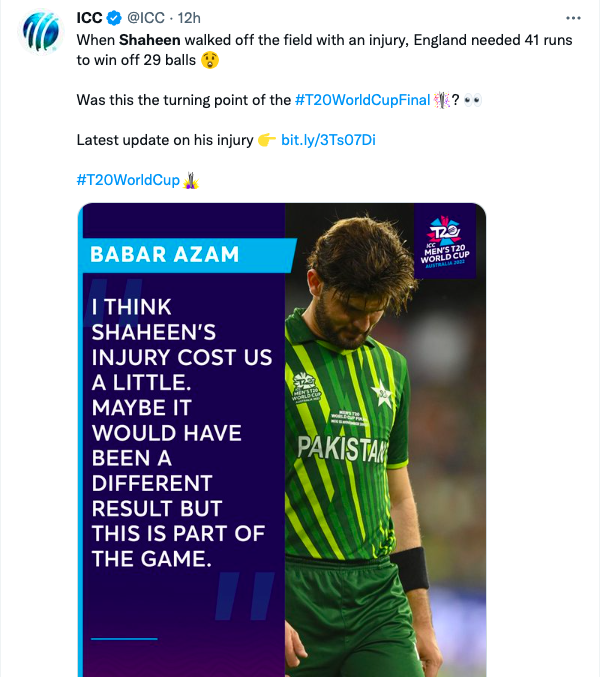