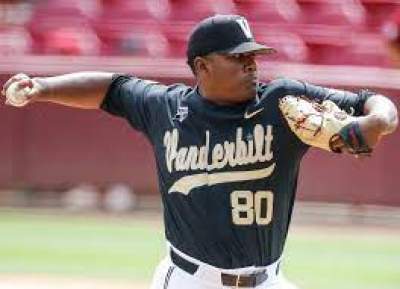 Betting the Mets made an error last season, the Texas Rangers selected Kumar Rocker with the third overall selection in the 2022 Major League Baseball draft. In a draft dominated by sons of former players and a lack of pitching, the Rangers risked their future, drafting Rocker much higher than his initial draft stock.

Rocker was drafted by the New York Mets last season but did not sign when there were concerns with his physical test.

After his final season at Vanderbilt, the New York Mets selected Rocker with the tenth overall pick in the 2021 draft. However, declining velocity and elbow issues revealed in a physical made a deal between the two impossible. Scott Boras, Rocker's agent, and other doctors believed Rocker and his elbow were healthy at the time and would not budge in contract negotiations.

Unsuccessful in contract negotiations with the Mets, Rocker joined the Tri-City ValleyCats, an independent baseball team based in New York, in 2022. Baseball-Reference says Rocker has started five games, pitched 20 innings, and has an ERA under 1.50 and 32 strikeouts this season while only walking four batters.

The Rangers are trusting in Rocker's health, effectiveness, and recent success with the Tri-City ValleyCats, especially considering the talent in this season's draft available with the third pick.

This year's draft was packed with exceptional players, including those descending from baseball royalty. Matt Holiday's son, Jackson Holiday, was drafted first overall.  Other players' sons drafted included Druw Jones, Justin Crawford, and Cam Collier. After seeing Vladimir Guerrero Jr.'s explosive start to his career, it will be exciting to follow the next generation of baseball families growing into the big leagues.

Meanwhile, the Rangers will hope Kumar Rocker develops into an ace avoiding the elbow and velocity concerns that plagued his final season at Vanderbilt. MLB players celebrated during the draft weekend, watching Juan Soto win the home run derby and the American League win the all-star game. Meanwhile, front offices, scouts, and fans were excited about their team's future. July 19, draft day, marked a fresh, new start for every team and fan base who hope their draft picks turn into the next superstars Like Mike Trout or Bryce Harper.

The Texas Rangers hope they found their next ace pitcher in Kumar Rocker.