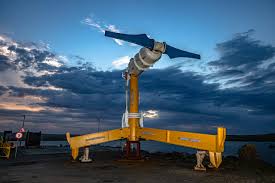 The demand for reliable, sustainable energy is on the rise. While wind and solar receive much attention, both sources have one major drawback : intermittency.

Given the issues with long-term energy storage from renewables, there are plenty of days when the sun does not shine, and the wind does not blow, which means power generated by solar panels and wind turbines could stall. As a result, many countries have remained steadfast in their reliance on fossil fuels. After all, burning coal or pump natural gas on a nice day is not necessary.

However, some organisations are now considering a novel option: ocean turbines, which generate electricity from tidal variations rather than winds. Because the ocean never stops moving, harnessing its energy could supply the base-load, or consistent stream of electricity, that other renewables cannot match.

IHI Corp engineers tested a 330-ton tidal turbine prototype on the seafloor near the Kuroshio Current. According to Japan's New Energy and Industrial Technology Development Organization, this current alone could generate 200 gigawatts of energy via underwater turbines, accounting for 60 percent of the country's generating capacity.

This follows the UK's successful connection of Orbital Marine Power's about 700-ton tidal turbine to the electrical grid in Orkney, Scotland, last year. In addition, four tidal turbines in Scotland provided the longest run of uninterrupted power from the new technology in 2019, powering about 4,000 homes.

HOW THE TURBINE WORKS

The design of these turbines is actually straightforward—practically, it is precisely how you would 'd expect a wind turbine to work.

The moon's gravitational pull on the planet creates a "tidal force," which causes the planet's and its water to bulge out on the sides closest to and farthest from the moon. Because the Earth and the moon travel through this point twice on their orbits, these bulges cause "high tides" on various coastlines twice a day.

The currents change as the tides change. The tides influence and can be predicted by currents, which are the left-to-right flows of water (but can also be affected by factors like water temperature, salinity, and wind). Consider them to be underwater gales.

The power source for sea-based turbines is these fluxes beneath the water's surface. Tidal turbines rotate and generate electricity as currents pass past them.

(Karal observes that the machines resemble ship propellers more than normal wind turbines.) The turbines can also work at various depths: The most modern Japanese model is anchored to the seabed, but some models, like Scotland's Orbital Marine Power, float and use robotic legs to harvest energy from the ocean's upper layers.

I interviewed ChatGPT - and the Results Were Unsettling