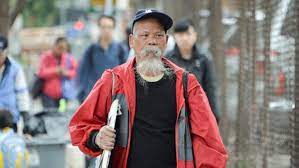 Hong Kong authorities have sentenced activist Koo Sze-Yiu, who is battling stage four cancer, to nine months in prison for his efforts to protest the Beijing Olympics. Koo Sze-Yiu, 75, was arrested by police in February before he could stage a demonstration against Chinese authorities. He intended to display a coffin with slogans outside the Beijing liaison office when the Winter Olympics began. He is currently facing a sedition accusation, which carries a possible two-year prison term. The court gave him a nine-month period, but Koo said he would appeal the decision and refute the allegations.

Koo, according to Beijing police, intended to take down the coffin and banners that said, "Democracy and human rights are above the Winter Olympics." Judge Peter Law reportedly said that the act represented a threat to national security, according to the Hong Kong Free Press. Koo is anticipated to be eligible for early release next month as he has been in detention since February, according to the news website SCMP. According to reports, he has been detained for his political involvement around a dozen times in the past. He is the most recent protester to get a sentence in Hong Kong. Several pro-democracy campaigners have been found guilty in recent months after being charged with sedition under the controversial national security law (NSL).

Beijing imposed the NSL in July 2020 to maintain order and stability in Hong Kong after widespread pro-democracy protests and riots in the previous year. Critics of the law say that the broad criminal code has further suppressed political dissent against China's ruling regime and has dangerously curtailed civil liberties such as freedom of expression and the right to protest previously legal in Hong Kong.

Since July 2020, more than one hundred and eighty-five people have been arrested by Hong Kong under the NSL alone, including pro-democracy lawmakers, business figures, critics and activists. Earlier this year, sedition charges were also leveled against news website Stand News and a speech therapist accused of publishing seditious material under the guise of children's books. According to the news outlet, the sedition charge, which stems from a colonial-era law, had not been used in Hong Kong since the mid-1960s.