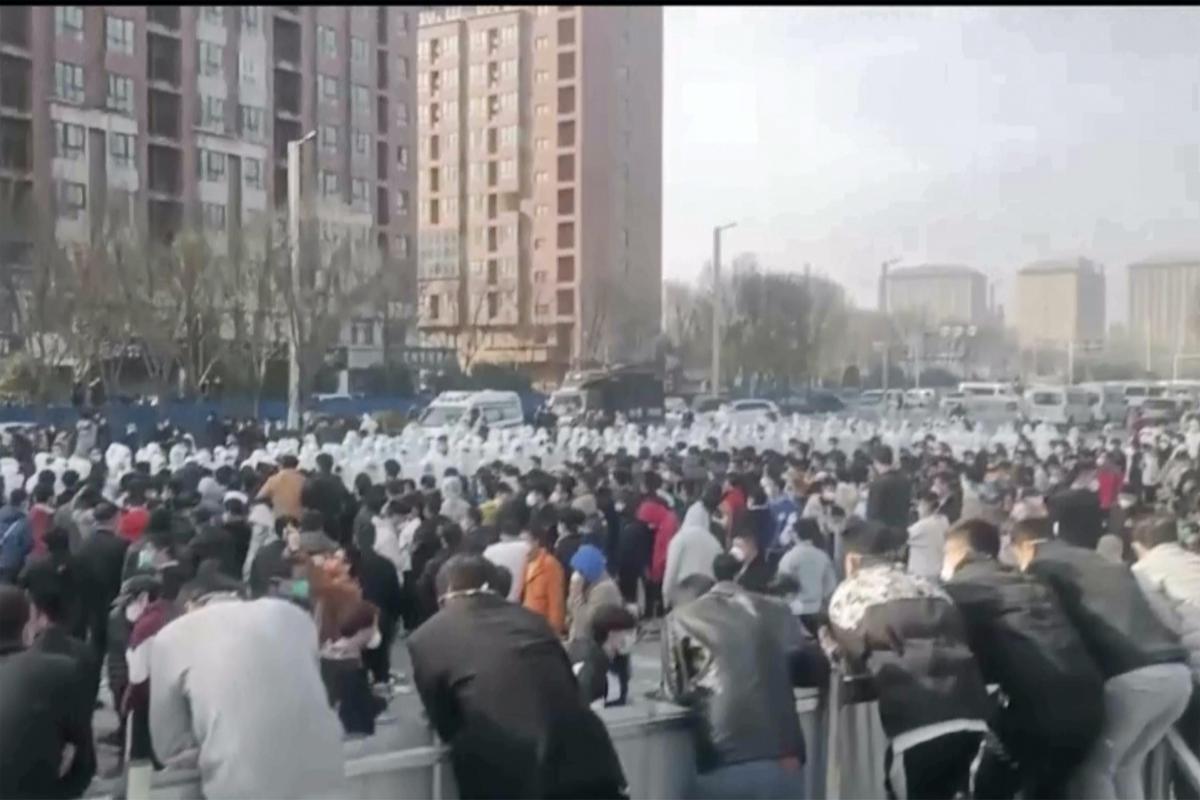 The world's giant Apple iPhone factory in Zhengzhou saw protests on Wednesday. Apple's principal subcontractor Foxconn, the Taiwanese tech giant, saw a surge in Covid-19 cases at its Zhengzhou site. It led the company to shutter the vast complex to keep the virus in check.

Several videos on Chinese social media have emerged on the internet and circulated widely online. Thousands of people in masks encountered a chain of police with plastic riot shields and dressed in white protective suits—footage clashing with security personnel in protests at the factory amid anti-virus controls.

"Regarding any violence, the company will continue communicating with employees and the government to prevent similar incidents from happening again," said Foxconn. The factory operator, Foxconn Technology group, said they were using "close-loop management," akin to a bubble-like arrangement. Workers live and work in isolation to prevent virus transmission.

Thousands of employees complained about inadequate help for coworkers who were ill and scarcity of anti-virus protection. However, those live streaming informed about workers being beaten up by police. Some yelled, "Defend our rights! Defend our rights!" smashing surveillance cameras and windows.

"They changed the contract so that we could not get the subsidy as they had promised. They quarantine us but don't provide food," said one Foxconn worker during the live stream.

Through strict lockdown measures and mass testing, China has struggled to curb virus transmission more than any other country. The China government said on Tuesday that more than 253,000 coronavirus cases had been reported in the past three weeks. Protests have flared with the severity of outbursts across China. Earlier this week, authorities wrote about a few deaths for the first time in six months.

The Beijing state media reported that from Thursday, they would further narrow its Covid-19 control measures by instructing citizens to take a 48-hour negative Covid test result before entering public places. "All people are required to show negative results on nucleic acid tests taken within 48 hours before entering government departments, office buildings, supermarkets, and other public places, as well as before taking buses and riding on the subway," reported the state-run China Daily newspaper.

The new iPhone 14 model has been delayed even further due to the tensions imposed on the Zhengzhou site. An industrial zone surrounding the factory, which employs 200,000 people, was suspended. However, in such a period of unpredictable policy and uncertain trade relations, there are dangers for Apple in relying on a vast production machine centered in China.

Meanwhile, high wages and better working conditions were promised to attract new workers to the factory. "Foxconn released very tempting recruiting offers, and workers from all parts of the country came, only to find they were being made fools of," said Mr. Li.

In conclusion, multiple employees recounted to AFP scenes of chaos and disorganization at the complex of workshops and dormitories. It is still being determined how many workers are currently employed, have left, or were affected by the virus and Covid- 19 curbs implemented before their departure.