After Burning for Weeks, Section of the Beirut port Silos Collapses Completely 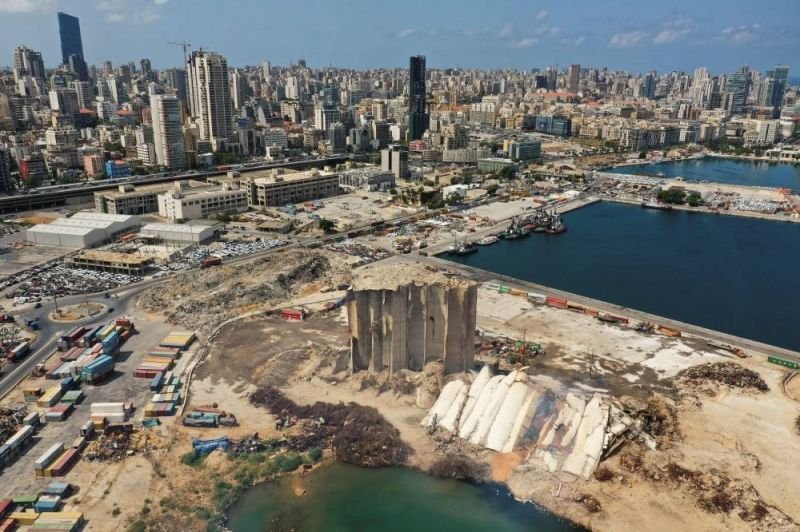 A view shows the collapsed northern section of the Beirut grain silos, damaged in the August 2020 port blast, in Beirut on Aug. 23, 2022. (Credit: Issam Abdallah/Reuters)

The northern section of the Beirut Port silos, which have been burning for weeks, collapsed completely on Tuesday morning creating a cloud of dust, according to Lebanese TV channel LBCI.

PM Najib Mikate stated in a letter signed by Minister of Public Works, Ali Hamieh, that the remaining parts of the silo will not be demolished and will be preserved as a memorial. The demolition decision that was released in March will be canceled.

L’Orient Today reported that the letter includes the perseverance of “the southern block of the Beirut port silos and safeguarding it as a memorial commemorating the memory of the port martyrs.”

Mikate explained that “the tilt rates of the silos’ southern block are normal and are affected by the natural and seasonal conditions, the temperature changes, and the sun’s direction.”

Also, after examining the air surrounding the collapsed silos, the Ministry of Health in cooperation with the CBRN National Team found significant amounts of Aspergillus, a type of Fungi.

The fungi is a result of tons of molded wheat which exploded two years ago and breathing deeply in such an atmosphere may lead to serious health issues, especially for individuals who have respiratory issues.

The Ministry of Health released a statement indicating reducing working hours in the port and encouraged wearing a KN95 mask.

Naser Yasin, Minister of Environment, announced an agreement to resolve the issue of the Beirut port silo burning.

The agreement includes the Beirut Firefighter working on cooling the port area for four to five days and cooperating with the Ministry of Public Works, UN Habitat and other NGOs to clean the damage surrounding the silos.

In response to the collapsing incident, the 2020 Beirut port explosion victims’ families blocked the highway leading to the port on Tuesday evening.

“Today, we will only block the road, but if our demands are not met, the investigation does not take place, and the silos are demolished we will take a bigger step, and consider this a warning,” said the spokesperson to L’Orient Today.

The spokesperson also pointed out that the victims’ families will not allow the government to demolish the “graveyard” of their kids.

The large historic 50-year-old silos are said to have absorbed a significant impact of the Beirut blast which was a result of tons of burning ammonium nitrate, unsafely stored at the port since 2013, killing 218 people and injuring 7 thousand others.