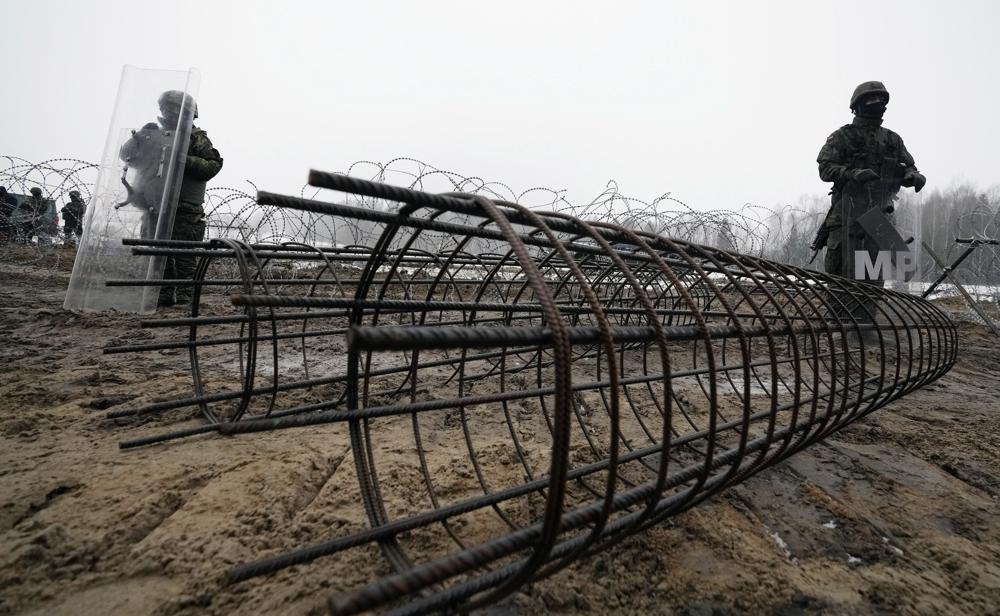 Guards and the military watch the start of work on the first part of a 115-mile and 18-foot high metal wall intended to block migrants from Belarus crossing illegally into EU territory, in Tolcze, near Kuznica, Poland, Jan. 27, 2022. (AP Photo/Czarek Sokolowski

A curtain of barbed wire has risen on the long borders between countries in the European Union neighboring Russia and Belarus, as Russia’s war in Ukraine and the threat of a possible migration crisis escalate.

Polish soldiers began laying razor wire earlier this month along Poland’s border with the Russian exclave of Kaliningrad after the government ordered the construction of a barrier due to reports of an approaching migration crisis. Cameras and an electronic monitoring system will also be installed in the area.

Defense Minister Mariusz Blaszczak said a recent decision by Russia’s aviation authority to launch flights from the Middle East and North Africa to Kaliningrad led him to reinforce Poland’s 210-kilometer (130-mile) border with Kaliningrad. The wall will consist of three rows of barbed wire at a height of 2.5 meters and a width of 3 meters (8 feet high, 10 feet wide).

“Due to the disturbing information regarding the launch of flights from the Middle East and North Africa to Kaliningrad, I have decided to take measures that will strengthen the security on the Polish border with the Kaliningrad oblast by sealing this border,” Blaszczak said.

A Polish government security official, Stanislaw Zaryn, acknowledged the border wall doesn’t stop everyone seeking to cross illegally, but “It does allow our forces to act rapidly and more efficiently, without the need to deploy as much manpower as before.”

The barriers with Kaliningrad “convey a strong message to Minsk and Moscow that Poland takes the security and integrity of its borders extremely seriously,” Zaryn said. “I believe that Belarus and Russia will think twice before pursuing again the weaponization of migration.”

Belarus has also been accused of facilitating migration into the European Union since President Alexander Lukashenko began encouraging asylum-seekers in the Middle East to travel to Minsk. Ukraine said on Friday they are also building a reinforced concrete wall and other fortifications on its border with Belarus.

“The Iron Curtain is gone, but the ‘barbed wire curtain’ is now, unfortunately, becoming the reality for much of Europe,” said Klaus Dodds, a professor of geopolitics at Royal Holloway, University of London, to the Associated Press. “The optimism that we had in Europe after 1989 is very much now gone.”

The Berlin Wall was erected in 1961 by communist leaders in the East and eventually fell in November of 1989, marking the reunification of Germany, soon followed by the dissolution of the Soviet Union. Now, more than thirty years later, it is the West who are building a barrier.