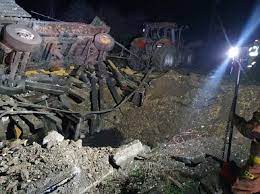 The eyes of the world are on Przewodòw after two missiles hit the area, killing two people. On the evening of November 15th, the peaceful farming community of Przewodòw, a village in the southeast side of Poland, was disturbed by the explosion of two unidentified missiles causing two casualties.

After the news of the bombing spread, global tension rapidly rose, with the fear that this had been a deliberate act of war from Russia. The first hypothesis was that the Russian missiles were aimed at Ukraine but were sent with a wrong trajectory, but it still felt like a threatening message to the G20 leaders.  Authorities tried to maintain calm, conscious of the stakes of this situation and the possible outcomes of a misjudged move.

What do we know about the two fallen missiles?

The narrative that this was a deliberate attack was quickly dismissed, with Moscow declaring that it was not their missile. However, Russia lost part of its reliability since the start of its "special" military operation, which later turned out to be a concrete act of war against Ukraine. At any rate, deliberately dropping missiles in Poland would have had very different implications, as the attack would have triggered a global conflict.

The blast site was under investigation by Poland's secret services right away. The investigation brings up different theories on what happened in Przewodòw, but the most reliable one, until otherwise proven, is the missiles being two S-300S.

Despite these being Russian fabrication missiles, they're also provided by the Ukrainian army and involved in the air defence system. According to the pieces of information which have been made public, the two shells failed while intercepting some Russian missiles and consequently fell over the nearby Polish village.

The Polish prime minister, Andrzej Duda, confirmed the theory by talking about an "unfortunate incident", and even the NATO general secretary, Jens Stoltenberg, followed the same line after the extraordinary reunion of the Atlantic Council, still blaming Russia for the situation.

While European politicians adopted a conservative approach in their declarations, Ukrainian president Volodymyr Zelensky is certain about Russia's fault in the damage and casualties: the decision to strike in Poland was, according to him, a deliberate attempt to send a message to the G20 leaders.

What would have happened if it was a legitimate attack?

Poland is a NATO member and has duties and benefits linked to the North Atlantic treaty (or Washington treaty), which defines the legal basis of the North Atlantic Treaty Organization (NATO). According to article 5 of the treaty, an attack on any of NATO's members will result in a proportionate response from all the organisation's members in the form considered most suited, likely using an armed response.

The worst-case scenario of the two missiles being Russian and deliberately deployed would have prompted a series of consultations among the decisional bodies of NATO. The planned response against the attacker would have had the potential to lead to a 3rd World War.