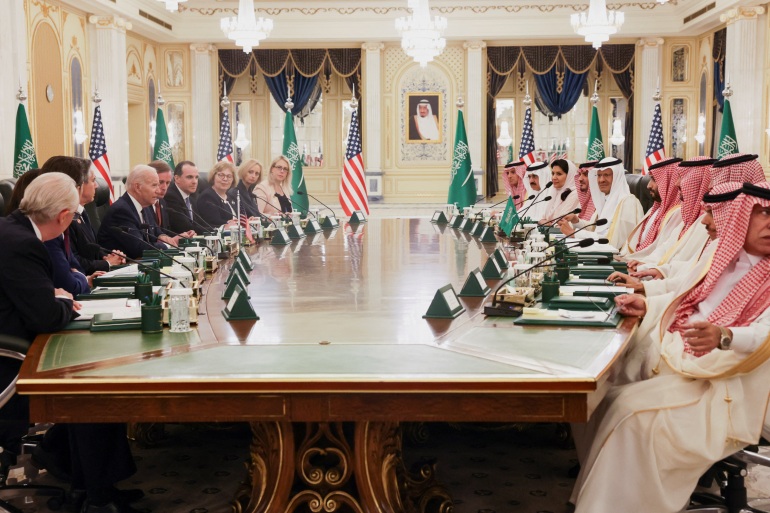 On Friday afternoon, July 15, U.S. President Joe Biden arrived in Jeddah, which was his last stop of a middle east trip which included Jerusalem and Bethlehem.

For the first time, the presidential plane, ‘air force 1’ flew directly from Tel Aviv to Jeddah, noting that Saudi Arabia still does not recognize ‘Israel.’

This event came as no surprise since Saudi Arabia had recently announced opening its airspace to all commercial aircrafts. Regardless of stating the kingdom’s commitment to the 1944 Chicago Convention on international civil aviation - a policy Biden described as historic, especially for airplanes departing from and to occupied Palestine. He also stated that it is a good step toward building a more integrated, stable and secure middle east.

The Saudi General Authority of Civil Aviation (GACA) said that “the decision will complement the efforts aimed at consolidating the kingdom’s position as a global hub connecting the three continents and to enhance international air connectivity.”

Yair Lapid, the Israeli prime minister described the Saudi decision as good news. He also mentioned in a tweet that the decision came after diplomacy between Saudi Arabia and the United States.

Biden met with Saudi King Salman, followed by a working session with the crown prince, Mohammed bin Salman Al Saud and Saudi ministers. Experts have said that the main motive for Biden’s visit to Saudi Arabia is energy interests. Biden said that he, “discussed the energy issue with Saudi officials and the need to offer such is the market.”

The American president continued, “and I expect practical implications from Riyad.” Biden also added that they aim to decrease the prices, keeping in mind that results would not be felt for another couple of weeks.

The Organization of Petroleum Exporting Countries (OPEC) partners are expected to produce more oil to subsidize the increased cost, which could help with US inflation. But Reuters news agency was told by a US official that Riyad’s oil production boost was unexpected.

Additionally, President Biden used the opportunity to mention the killing of Saudi journalist Jamal Khashoggi, during the meeting with the crown prince. To which he had responded by denying involvement and holding the killers accountable. However, it is said that Mohammed bin Salman Al Saud is known to have directly approved the killing of Khashoggi.

Biden told Reuters reporters that, "with respect to the murder of Khashoggi, I raised it at the top of the meeting, making it clear what I thought of it at the time and what I think about it now.”

"I was straightforward and direct in discussing it. I made my view crystal clear. I said very straightforwardly, for an American president to be silent on an issue of human rights is inconsistent with who we are and who I am,” he added.

Biden also went on record stating he had gone through a series of meetings and discussed the defence needs for Saudi Arabia, saying that the US will not leave a vacuum in the middle east for Russia and China to take over.

Accordingly, a larger-scale meeting with Biden and Arab leaders is to be held in Jeddah on Saturday.