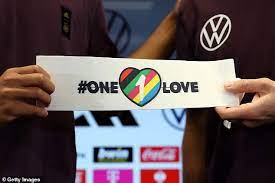 The multicolor armband has been deemed to be ‘bullying’ by the organization FIFA during the World Cup in Qatar this year. On Monday, Germany is among the seven European countries that wished to wear the One Love armband in support of the LGBTQ+ movement.

The teams of England, Wales, Denmark, Netherlands, Belgium, and Switzerland will join in solidarity with the rights of the LGBT+ community. However, on Monday FIFA imposed sanctions on captains wearing the band, with yellow cards if they decide to do it. Although, instead of One Love, Harry Kane, the captain of England, was wearing the band with the sign “No Discrimination” during the game against Iran at the Stadium in Doha, Qatar.

The criticism started with the known instances related to human rights in the country hosting the World Cup. One of the things that we’ve seen in the media and the controversy at the games is the discrimination against homosexual acts, which are considered immoral and illegal there and carry a penalty of seven years imprisonment as punishment.

The world is watching. Football is much more than a sport, it is a huge part of people’s lives. The rushing of the adrenaline brings a collective sense of enjoyment for fans. All the opportunities to share consciousness about the legal counsel to punish LGTB+ acts in Qatar thus claimed many people’s attention. Indeed, it is impossible to ignore the abuses and homophobia  that have come to light during Qatar’s World Cup.

To protect the LGBTQ+ community, the support from football players in this movement around inclusion and equality of genders and sexualities is therefore essential. Social networks also play a huge role, highlighting human rights issues through the hashtags #QatarAntiGay, #onelove, and  #LGBT+FIFA.

Immediately after the policies were imposed by FIFA, they weren’t tolerated by the participants. Standing up against them, Rasha Younes, an LGBT Right Senior Researcher investigating abuses in the Middle East, responded to the situation by sharing her research in a tweet: New @hrw research exposes #Qatar security forces' arrest and abuse of #LGBT people in detention, only weeks ahead of the #Qatar2022 @FIFAcom #WorldCup.

Moreover, the captain of Germany, Manuel Neuer, couldn’t wear the band during the game against Japan on 23rd November 2022, condemned by The Fédération Internationale de Football Association. Protest also grew after players were covering their mouths in the team photo before the game. Also, Germany’s Interior Minister Faeser wore the banned “One Love” band in the tribune during the game.

Discrimination should never lead to abuse for people in society, unfortunately, the global body of association for football has opened up a very serious issue with this year’s games.