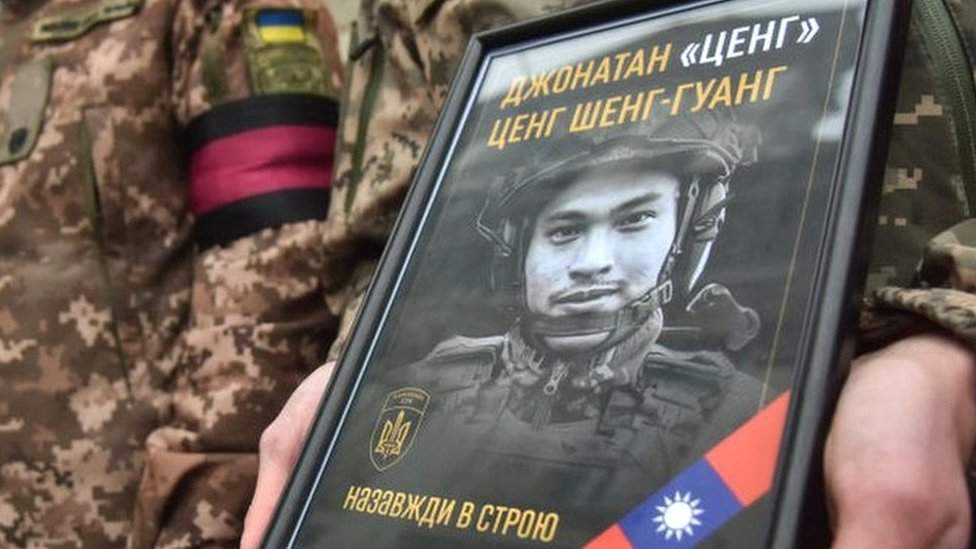 In a church in Lviv, a city in western Ukraine, Tseng Sheng-guang's mother takes one last look at her son, who lies in a coffin. She is nestled between her family and several Ukrainians who want to pay tribute to Tseng Sheng-Guang, who died thousands of kilometers from his home, fighting for a country he had never visited. "My son Sheng-Guang, I want you to know that you were brave," says her mother. "You will always be my baby, and I am proud of you."

Tseng was fighting with the international legion of Ukrainian territorial defense forces when he was assassinated on November 2 in Lyman, a city located in the east of the country. The man was the first Taiwanese killed in action in Ukraine. On the other hand, the Ukrainian Foreign Ministry released a statement after Tseng's death, saying that he had "given his life for Ukraine's struggle for freedom." In fact, dozens of foreign soldiers have traveled to Ukraine to fight, and among them, the number of Taiwanese is low, estimated at around 10.

China disputes that Taiwan is part of its territory which is located 180 km to the east of the country, and maintains the idea that it will unify it in the future, even by force,  although Taiwan sees itself as a small independent island state of China. In addition, tensions have increased notably in the area that divides both territories due to the subsequent visit by US politician Nancy Pelosi to Taiwan last August, a fact that angered Beijing. China responded with military exercises around Taiwan.

Jack Yao, 28, was one of those who decided to go. He arrived in Ukraine three days after President Volodymyr Zelensky called for foreign volunteers to participate in Ukraine's fighting, traveling from Taipei to Poland and then to Kyiv. Yao told the BBC that he ''he was watching the situation since last year, especially with the Russians moving soldiers and tanks to the Ukrainian border. Nobody believed it could happen. The situation in Taiwan and what happens there it is very similar. I was thinking about what I could do to support Ukraine," he added.

Lastly, in his mourning, Tseng's mother said that her son's decision to fight shoulder to shoulder with others for Ukraine gave her some peace, such as the United States. "Despite my pain, it gives me great comfort to know that in the last moments of his life, Sheng-Guang was fighting shoulder to shoulder with the group of the bravest warriors, who supported each other and stood together in life and death."

US President Joe Biden has repeated that his government would support Taiwan, given a possible Chinese attack. Still, most Taiwanese don't think the island can hold out against China for as long as Ukraine has with Russia.