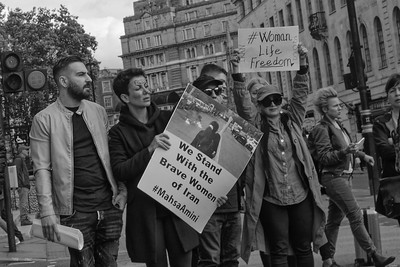 Thousands marched together to the city of Saghez in remembrance of Mahsa Zhina Amini, a 22-year-old Iranian woman who died in police custody after being arrested for wearing her hijab incorrectly.

Three days after Amini was taken by ‘moral security’ from her family outing in Tehran, she was pronounced brain dead due to the beatings she suffered.

The days following the news of her death have been filled with global public outrage. There were rallies and protests being organized all across Iran in hopes of justice for not only Mahsa Amini but for all Iranian women.

October 26, 2022 marked the 40th day after Amini’s passing: in Islamic culture this is called Arbaeen or Chehlum, which is the traditional mourning period to honor the newly deceased. Forty days after someone's death holds great significance to Iran in the ‘spiritual realm of transformation.’ The march to Amini’s burial grounds was intended to be a sign of unity of the people, and a stand against the injustices that have been occurring throughout the country of Iran such as brutal police attacks on civilians.

According to The Guardian, civilians felt the need to leave their cellphones and any other electronic devices at home due to potential government GPS tracking to detain anyone who attended the march and any protests or riots following it.

A long road of people can be seen chanting and marching alongside a closed road in a video posted by the New York Times. It starts as a peaceful march with music and a sense of togetherness, then ends with police forces disrupting the peace and opening fire on them, letting out tear gas. People were being beaten with batons and run over by police motorcycles.

Just before the 40-day mark for Amini, activists were already organizing gatherings across the country to prepare for Abaeen. At the forefront of most of the organization of it all was a newer group of young activists who called themselves Javanan-e Tehran. They called out to Iranian citizens through social media platforms like Twitter to organize their protests in places where there weren't heavy security forces guarding. Activist groups like Javanan-e Tehran have made it clear that their efforts won’t be stopped although government forces have tried to put an end to it all.

It was announced on October 28, 2022 by the Iranian Human Rights Organization that there have been at least 253 killings since the nationwide demonstrations started: which includes 34 children and 19 women. More information and local updates on what is happening in the streets of Iran can be found on BBC Persian Instagram page.

The Iranian regime continues to kill innocent civilians and attempts to cover the statistics of these deaths. The fight for justice for Iranian women continues and is stronger than ever, as activists and civilians continue to come together in hopes to stop the violence.

Here’s how you can help.