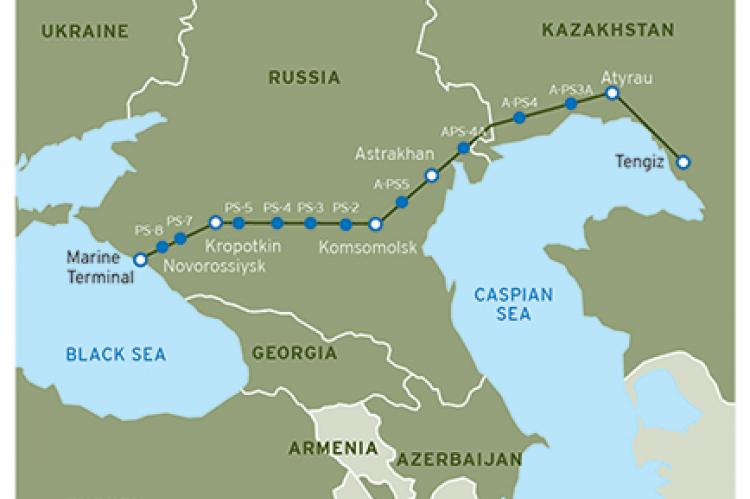 The CPC pipeline runs from the Tengiz field in Kazakhstan to the Russian port of Novorossiysk. Source: 2015 Chevron Corporation.

On July 11th, a Russian court of appeals based in Krasnodar reverted the sentence issued by the Primorsky district court on July 5th, ordering the suspension of the majority of Kazakhstan's crude oil exports from the Russian port of Novorossiysk on the Black Sea.

The block was imposed on the export route managed by the Caspian Pipeline Consortium (CPC), which controls two-thirds of Kazakhstan's crude oil exports westwards.

The first sentence put a halt to the operations for 30 days due to environmental infractions after an audit of hazardous operation facilities was carried out by Russia's Rostransnadzor oil regulator.

The audit revealed a supposedly high number of environmental violations under the Oil Spill Response (OSR) Plan. Given that the Caspian Pipeline Consortium operates within the territory of the Russian Federation, it is obliged to comply with Russian Federation law.

This was a major blow to the Kazakh economy as 90% of the crude oil transported to the Russian port through the 1,500 km long CPC pipeline comes from Kazakhstan while Russia exports only 10% of its oil through the same port.

The July 5th decision raised several concerns among Kazakh and European leaders as the block on the pipeline came one day after the Kazakh President, Kassym-Jomart Tokayev, expressed his solidarity to the European Union concerning the stabilization of the global energy market.

Nikita Shatalov, an analyst at the government-affiliated Kazakhstan Institute for Strategic Studies, maintains that the environmental reasons cited in the sentence are false.

In a Telegram post, he clearly states that "everyone understands that the reason is purely formal, and the claim of Rostransnadzor has nothing to do with it. The Kremlin decided to move from informational pressure to real pressure to persuade us to change our position on issues of principle to them—primarily economic ones."

The analyst underlined an important backlash to this decision. The closure of the major export route for Kazakh oil will push Nur-Sultan to look for alternative ways and new infrastructure solutions to receive and send fossil fuels.

Among them, he cites the Baku-Tbilisi-Ceyhan pipeline, routes connected to China, and the new pipeline project that, if realized, will connect Turkmenistan to New Delhi, making Kazakhstan a major player.

Accordingly, the Kazakh President, on July 7th, requested that the government work toward increasing the capacity of the Atyrau-Kenkiyak and Kenkiyak-Kumkol oil pipelines. These are pipelines designed to transport oil from the Kazakh western fields toward China.

The recent Russian decree was not the first intervention in this pipeline.

As reported by DW, the CPC pipeline has experienced many interruptions since Russia invaded Ukraine and the EU imposed sanctions, after operating trouble-free for more than 20 years.

For instance, according to the Russian authorities, two loading buoys were allegedly damaged on March 22nd during a storm, rendering the terminal completely inoperable for several weeks.

However, according to the German business journal Handelsblatt, there wasn't a "strong storm" in the area based on the information from the German Weather Service data.

Moreover, a World War II mine was unexpectedly discovered during a routine seabed investigation in June. This led again to the suspension of loading activities from two of the three buoys.

The major issue was, nevertheless, the Kazakh support for the EU. After last week's sentence, the Kazakh President required the assistance of the US.

The President asked the US companies already active in Kazakhstan to assist the country more in the development of its energy resources to circumvent Russia. Accordingly, the Caspian route is deemed one of the major alternatives.

Accordingly, Tokayev said that "I instruct KazMunaiGaz to work out the best option for implementing this, including through the involvement of investors at the Tengiz project".

US involvement in the region is already substantial. The Tengiz field, situated in western Kazakhstan, is being developed by Tengizchevroil. This is a joint venture whose 50% is controlled by U.S. Chevron and 25% by its associate ExxonMobil. KazMunaiGaz, the Kazakh state-owned oil and gas company, owns another 20%.

Kazakh oil is vital for the EU also. On July 4th, Tokayev had a telephone conversation with the President of the European Council, Charles Michel.

During the conversation, Tokayev underlined the need for cooperation with the European Union to develop alternative transcontinental corridors, including the Trans-Caspian International Transport Route.

Also, concerns regarding threats to energy security have been expressed. The Kazakh President made it clear, in this regard, that Kazakhstan is ready to use its hydrocarbon potential to stabilize the situation in the world and European markets.

Already in 2021, Kazakhstan played a major role in Germany being the third largest oil supplier, after Russia and the US.

Currently, given the sanctions regime imposed by the EU on Russia, the Central Asian country's role in energy exports can potentially skyrocket.

The recent sentence that unblocked the CPC, allowing Kazakhstan to resume its export activities, was undoubtedly a relief.

Nevertheless, this kind of intervention from the Russian side, seen by the West as a tit-for-tat approach, can potentially backfire against the Kremlin as fears of politically motivated gas cuts and pipeline blocks are pushing the major oil and gas actors towards new routes to bypass Russia.

In this regard, Central Asia, and particularly Kazakhstan, has the potential to become a major player in the market given its favorable geographical position at a crossroads between west and east.