The Line: A Futuristic Way of Living 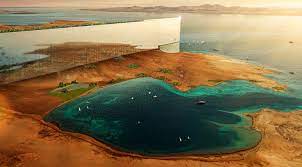 In 2021, the prince of Saudi Arabia, Mohammed bin Salman, introduced The Line to the world. The Line will be a city that, by its mere infrastructure, will give the world a glimpse into urban planning.

The Line is designed to help with Saudi Arabia’s growing population and is made to be an attempt at transforming the nation’s economy and drive the demand of oil away. This project is a step towards trying to find solutions on the country’s current issues.

“With some 56 percent of the world’s population now living in cities, urban sustainability and public well-being have become a growing concern for governments worldwide,”  Arab News explained. The Line is Saudi Arabia’s way to address the challenges it faces.

“The Line is a civilizational revolution that puts humans first, providing an unprecedented urban living experience while preserving the surrounding nature,” NEOM, the city that has The Line, said in a statement. “It redefines the concept of urban development and what cities of the future should look like,”

Mohammed Bin Salman, the chairman of the board of directors of NEOM, has elaborated on the futuristic city that will come alive in 2030 while thinking about the current crisis it can bring. According to him, we “cannot ignore the livability and environmental crises facing our world’s cities, and NEOM is at the forefront of delivering new and imaginative solutions to address these issues.”

The Line will be 170 kilometers long, 200 meters wide, and 500 meters above sea level. It will be home to 9 million people while still preserving the surrounding nature and using 100% renewable energy, but that is not all.

“It will be built on a footprint of 34 square kilometers, which is unheard of when compared to other cities of similar capacity,” NEOM said on their website. “This in turn will reduce the infrastructure footprint and create never-before-seen efficiencies in city functions.”

Other benefits include 380,000 new jobs, new business opportunities, a zero-car environment, a solution to the increase in Saudi Arabia’s population, its location in accordance with other countries, and much more.

The Line will differ from other cities because of the idea of Zero Gravity Urbanism. According to the Saudi Press Agency, this is “the idea of layering city functions vertically while giving people the possibility of moving seamlessly in three dimensions (up, down or across).”

Videos have been released as well as images demonstrating the progress of this project. MIT Technology Review shares its thoughts saying that the photos found “suggests that the workers have already excavated around 26 million cubic meters of earth and rock—78 times the volume of the world’s tallest building, the Burj Khalifa.”

The Line is focused on changing urban planning and finding solutions for the current climate crisis. It is well underway drawing humanity closer to urban living and a different lifestyle that most cities abide.