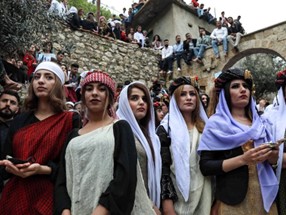 The Yazidi religion is a small community that originally come from Iraq. They have their own beliefs, religious places, and own celebrations which they call Eid. The Yazidi community have been through 73 genocides until 2014. On 3, August 2014 Islamic State (ISIS) attacked the Yazidi community and kidnapped thousands of women and children according to Nadia’s Initiative.

ISIS attacked the Yazidi community because of their religion and wanted to convert them to Islam and eliminate their religion. Women and children were kept in captivity and men were killed if they didn’t accept conversion to Islam.

Children were taught how to fight with guns and other weapons and they were forced to read Quran (a special book for Muslims to read) and follow the Islamic religion. ISIS men sold Yazidi women to each other every day.

People who were lucky to leave their homes before they were caught, had to walk for days to reach a safe place. People went to the mountain Sinjar which was the closest place to go, or to Turkey. ISIS then bombed Lalish (a special place for Yazidis that they pray in).

Yazidis began living in Turkey in tents and applying to UNHCR to leave for a safer country. Some people who had relatives in ISIS’ hands contacted ISIS and bought women and children at the prices ISIS had decided. According to Nadia’s Initiative, 80% of Yazidi women who survived sexual slavery have PTSD.

A woman that has survived sexual slavery is Nadia Murad, who now has inspired so many women and girls. She won the Nobel prize in 2018 after telling her story and has done so much for the Yazidi community, such as meeting with presidents of Finland, the United States, France and more. Nadia Murad has done interviews with many channels and people, and one of her recent interviews was with Angelina Jolie for Time magazine.

Nadia Murad told Angelina Jolie her main goal is to bring those who have committed crimes against the Yazidi community to court and make sure it does not happen again.

” If we do not hold those who have committed these crimes accountable it will not prevent this from happening to other women,” she said.

Nadia Murad also said during the interview with Angelina Jolie that leaders have to know women are facing and will face sexual violence all around the world and we need a plan to deal with these issues.

“World leaders need to understand that whether it’s in Yemen or Ukraine or any other place, violence against women will occur and we should make sure that we have that in mind when planning to deal with these conflicts,” she said.

Nadia Murad created Nadia's Initiative which has helped the Yazidi community in Iraq with schools, libraries, and computer programs from Yazidis who are in more developed countries.

Yazidis now are refugees in the United States, Germany, France, Turkey, Australia, Canada, Sweden, Poland and more. However, everyone has relatives and loved ones who are still kept in captivity. According to Nadia’s Initiative, more than 200,000 Yazidi are still displaced and 150,000 have returned to Sinjar struggling to rebuild their lives.

The ‘Anti-Trans’ Movement In The U.S. Is Reaching An Alarming Stage

Cyberviolence: Bane To The Freedom Of Women