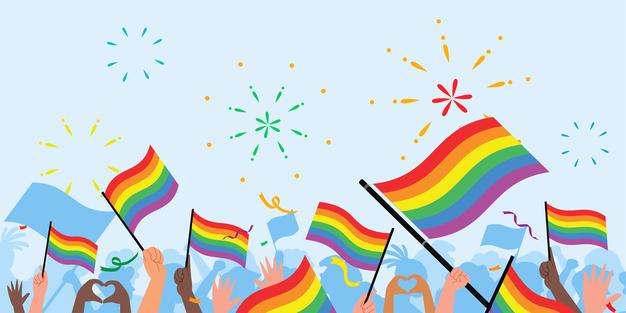 Finally, the bells of LGBTQ+ (lesbian, gay, bisexual, transgender, queer and others) pride season rings in June, and everyone is gearing up to celebrate this virtually during this pandemic again. LGBTQ+ has come a long way now yet, there is a constant need to push this community further by spreading more and more awareness on this, starting with its primary season, that is, pride month.

Pride month is celebrated in June every year to honour the Stonewall riots and works, which happened to bring equal justice and opportunity for LGBTQ+ in America during 1969. Now pride month is celebrated through pride parades and parties along with small-scale events like concerts and workshops. Memorial to people who were lost, because of hate crime and HIV/AIDS is also a part of this.

The main motive of pride month is to bring a certain kind of impact in the present, past, and future of oneself and around our country-wise, locally, and globally. Among this long pride month event, the most important date is 28 June, and it is Global Pride Day.

Why pride month, is important?

Gender minorities which are LGBTQ+ community are fighting for basic privileges which straight people have legally everywhere like the right to marriage, the right to adopt children, and start families. Pride month helps them to get more closer to their rights, accept each other in their community, open up themselves and fight for anti-LGBTQ+ evil stuffs like homophobia and hate crime against them.

Indians celebrate pride month too, and with the new COVID-19 lockdown restrictions they have found new means to bloom and rise. They have used virtual means of celebrating this month digitally and virtually by using hashtags like #pridemonth on Instagram and Twitter, viral video challenges in TikTok, taking part in virtual live sessions of parades, making content in social media channels like making awareness video in Facebook and YouTube, or LGBTQ+ supporting illustrations in Pinterest, digital artworks in Tumblr, Inkitt or Wattpad stories, and many more. If you are part of this community or want to show support to them, then you can follow and participate in social media trends related to pride month and LGBTQ+ along with them.

More than spreading awareness and fight off external issues like homophobia and hate crimes, LGBTQ+ need to work on accepting and solving their internal problems and strengthened themselves first. There is a lot of internal dispute and racism within their sub-communities, which they need to acknowledge and resolve. Some people stan their sub-community is so much that it creates misunderstanding and unnecessary fights, hatred, and mini-wars among them.

Pride month gives hope to many new buds by helping them open up, explore, accept and be proud of themselves. But, there’s a sad side too. Some fake LGBTQ+ supporters and toxic community members rather than supporting and appreciate them, attack them on social media through hate comments or hurtful messages, which demotivates these young buds more. For example, if a person opens up themselves as gay to their so-called supportive friends, those friends passively demotivate them and make them regret their existence, and throw them in the pits of self-doubts. Similarly, at early stages, young buds go through withdrawal symptoms of their identity, and there are many instances that they post something about their gender like gender reveal and later delete that because they are hesitant.

Later they face hate by some members of their gender community in later posts or personal message lists which is a nightmare to newbies of this community. Such issues must be brought out during pride months and work together on this. After all, pride month is all about healing, rising above old beliefs and limits, spread awareness, and maintain balance in humanity.