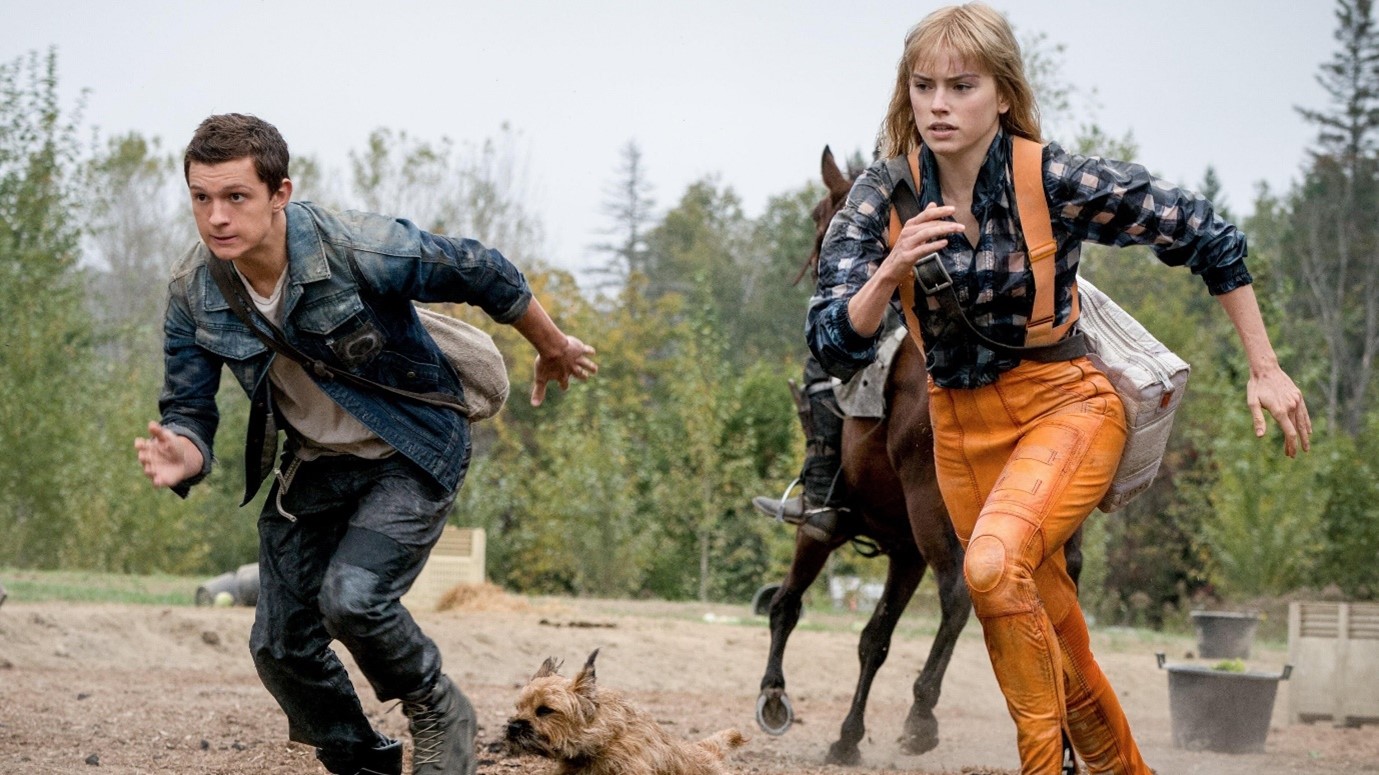 Chaos Walking is a 2021 science fiction dystopian action film directed by Doug Liman, from screen play by Patrick Ness and Christopher Ford. It is adapted from Patrick Ness’s YA science fiction trilogy Chaos walking (The knife of never letting go, The ask and the answer, Monsters of men). These books have a die-hard fandom and are exactly the sort of thing that 13-year-olds devour (I know I did). So the fact that the movie fell on its face, much like Viola’s aircraft, after years of waiting for the on screen adaption is a disappointment.

The premise of the film foolishly attempts to summarise 3 fairly hefty books in a 2-hour period. Chaos walking is set in the future, on a new world where the men have been infected with the noise and all the women have died from a disease, or so it seems. The noise is an ingenious and abstract concept that the film spends absolutely no time explaining. Someone who has never read the books before would be as lost as Viola trying to navigate her way on a new planet. The director would have to infected with the noise for us to be able to figure out what is going on and what on earth (or what on new world) his thought process was behind some of these absurd decisions.

The story follows protagonist Todd Hewitt (played by Tom Holland) who is written as a bland character, distinguished by his encounter with a girl for the first time in his life. Viola’s (played by Daisy Ridley) scout ship has crashed near Todd’s farm, and she is the only survivor with her main personality trait being her yellow hair. Is it just me or does it smell of manic pixie dream girl in here? The purpose of the scout ship is to assess life on the new world and act as an informant to the larger generational craft which has spent 64 years travelling from earth to the new world, and with the way this plot unfolds I advise them to keep going.

The elephant in the room, although I don’t think they have elephants on this planet, is the star-studded cast, or more specifically the plethora of A-list celebrities crammed into Prentisstown and glaring lack of hype around the movie. Clearly the production team expected this movie to do well, which explains the $125 million budget. However, there were red flags early on with the dozens of reshoots and rewrites. Perhaps the biggest mistake was casting Tom Holland (26) and Daisy Ridley (30) as 12-year-olds. I know we have all been laughing at Riverdale for casting 20-something-year-olds as high schoolers but frankly this is a new low. Is Hollywood out of child stars?

In all fairness Holland and Ridley do an admissible job at pretending to be a decade younger than they are with the help of the makeup team. The problem with this casting in particular is that Todd’s young age is integral to the plot, although this is not explained in the movie so maybe it can be overlooked. Todd Hewitt had never been outside of Prentisstown and the writing team also seem afraid of exploring any of the central themes of these cleverly crafted dystopian books. More time seemed to be spent on Tom Holland’s biceps than any of the creative concepts such as the noise, theme of colonialisation, the corrupt government, gender relations, and alien life form found on the new world. The spackle are unique creatures that had my 13-year-old brain reeling and are abruptly skirted over in the film, which is a waste of an opportunity. Kilian, who dies in the first third of the movie, has more screen time than this entire species.

Without strong characters and an exploration of a diverse range of themes the plot limps its way through the forest alongside Todd and Viola like it’s been shot in the leg with the Mayor’s futuristic gun. The dialogue is dry and uninformative as there is a dependence on the noise as the main way to communicate key events and plot twists, which is ultimately ineffective.

The books follow Todd and Viola as they explore the new world, moving through different towns and meeting friends and foes on their way to Haven. It is a beautifully fleshed out, meaty story which should work fabulously on screen, but fails to do so. The audience are left with unanswered questions from the vague dialogue of the one-dimentional characters who tend to speak in riddles. Overall, the film was poorly executed and made to look like any other sci-fi film with its grey heavy colour palette and confusing combat scenes.

I will admit that my review might be harsh, but it is the opinion of a fan of the books. Booklovers are notoriously fickle about onscreen adaptations of their favorite reads, but the mess they made of Chaos walking is more than a job done badly. I struggle to understand how they can render excellent books into a movie night gone wrong.