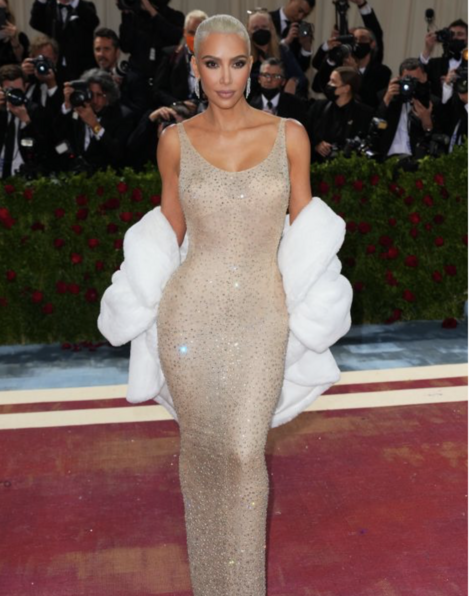 Wearing vintage designs is nothing out of the norm, especially when showing it off at high fashion events. Last week's Met Gala was no different when Kim Kardashian's dress became the center of online controversy.

Kim Kardashian wore Marilyn Monroe's historic 'Birthday dress,' loaned to her by Ripley's Believe or Not Orlando, who acquired it at an auction for 5 million dollars. When stepping foot on the red carpet, Kim was met with immediate criticism by the online community. Many were outraged, believing that she did not deserve to wear the dress and that it was a disgrace to Marilyn's legacy.

Ripley's posted a video on their Instagram where they gifted Kim a lock of hair that belongs to Marilyn. Kim said, "Oh my god, I'm literally going to do some crazy voodoo shit *laughs*, and I channel her." When this clip was released, it gained backlash from people who commented that they thought it was disrespectful and allowed celebrities to disturb the deceased. Many have also taken to Twitter to express their outrage, believing that Ripley should have at the very least given the dress to someone else, like Lady Gaga.

Academy Award-winning designer Jean Louis created the dress itself. According to him, Marilyn had expressed that she did not want anyone else to wear the clothing after her since it was custom-made and specifically tailored for her body measurements. Allowing Kim to wear it is considered unethical by many fashion enthusiasts and conservators who believe it disrespected one of Marilyn's last wishes.

For historical background, in May 1962, the infamous 'Birthday Dress' was worn by Marilyn when she sang Happy Birthday to President John F. Kennedy at his birthday celebration that also acted as a fundraiser for the Democratic Committee. During that time, the dress caused a stir for being very revealing due to its nude color, which gave off the illusion of Marilyn being naked on stage.

The seductive nature of the dress fueled rumors about Marilyn's affair with the president and his brother, the attorney general Robert 'Bobby' F. Kennedy. The dress was worn months before Marilyn's untimely death on August 4th, 1962. The Kennedy celebration was one of her last significant performances.

On the other hand, some people argued that Kim's homage to the bombshell blonde was perfect, and it was nice to see her get excited about wearing a piece of history. The whole Kardashian clan is considered major influencers and sex symbols for our generation, similar to Marilyn, who was known as the 'it' girl of the ‘50s and early ‘60s. Kim also didn't wear the dress for the entire night, only wearing it for the red carpet and immediately switching to a replica.