Environment and Climate change issues are becoming more and more intense with time, the whole world is being affected one way or the other, and everyone wants to find a solution. The United Nations Cop27 is one of the significant attempts in this direction.

The defining issue of Cop27 is Loss and Damage reparations, which were being demanded and discussed by 138 developing countries. Loss and Damage here means that the low-income countries that have experienced devastating impacts of the climate crisis but have contributed significantly less to the cause should be paid reparations by the rich and developed countries who are the most significant contributors to the worsening of climate change.

The devastating floods in Nigeria, Pakistan, and Bangladesh or the drought and famine in Africa are some catastrophic effects of climate change that are visible to the world. At Cop26, the rich nations were resistant to the demands for Loss and Damage compensations, but the issue made it onto the official agenda of Cop27. Although it is already falling short of the needed progress, some countries have agreed to participate.

Ireland’s Taoiseach Michéal Martin announced that Ireland “will donate €10 million to the Global Shield initiative”. He tweeted, “Loss and Damage is a priority for Ireland, and it’s how we lessen the impact for the most vulnerable.” 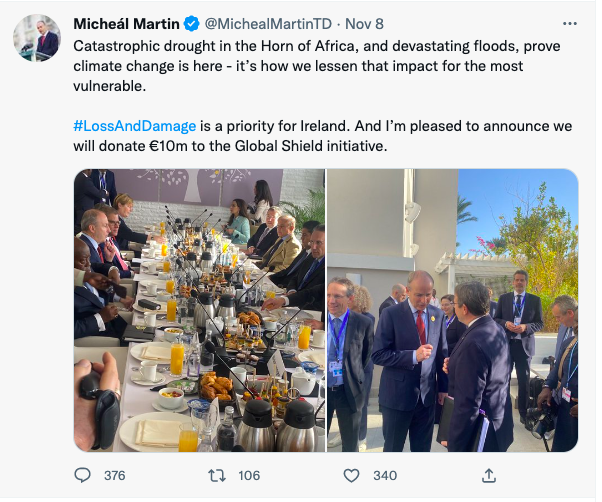 While this seems to be a step in the right direction, the funding comes from the €225million Ireland has promised to pay developing nations each year by 2025. From the devastations being faced and millions of lives at stake of hunger, famine, and homelessness, this Global Shield initiative can play a vital role in helping them.

The climate activists of Ireland believe that the government needs to act more in that direction rather than just talking. Tony Lowes, director of the Friends of Irish Environment, thinks that in the next ten years, things will be worse. He said that “the budget needs to be adjusted” and suffering people should be supported.

“The government is saying we are doing great, but I don’t see any new proposals regarding reduction. Ireland is nowhere close to achieving the targets set in the Paris Agreement,” said Tony.

Stop Climate Chaos, a coalition of civil society organizations in Ireland, says that the decision on sectoral emissions targets is a crucial litmus test for the government's commitment to climate action.

Climate activists worldwide are fighting a continuous war and trying to raise awareness not just among society but the governments as well. The Paris Agreement was signed in 2015 to reduce carbon and greenhouse gas emissions as soon as possible to limit global warming below 1.5 degrees Celcius compared to the pre-industrial levels.

However, the recent International Energy Agency (IEA)’s Global Energy Review report states that energy and industry-related CO2 emissions grew to a record high in 2021. Governments worldwide are still permitting the extraction and use of fossil fuels leading to higher emissions.