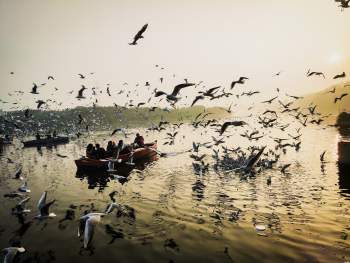 At the end of 2020, a record number of people, mostly from Central America, attempted to cross the US-Mexico border to seek asylum, fleeing violence and corruption, but above all, to escape from a series of climate changes they had never seen before.

As the Earth's climate changes faster than at any other time in human history, the climate crisis is increasingly shaping our world and ways of living. Climate change is defined as the alterations in average weather conditions and includes changes in temperature, precipitation patterns, frequency and severity of some weather events, and other aspects of the climate system. According to a 2017 study in Science Advances by 2100 temperatures could rise to the point that “human exposure for even a few hours will result in death for the fittest of humans under shaded, well-ventilated conditions”.

Climate change, when intersecting with physical, social, economic, and environmental vulnerabilities can negatively impact food and water production as well as aspects of economic and political security. As a result, climate change can cause population displacement, loss of livelihood, weakened governments, and in some cases, even political instability and conflict (US Report on the Impact of Climate Change on Migration 2021).

More recently, the World Bank Group’s report stated that by 2050 more than 140 million people will migrate within their countries as a response to climate change conditions, particularly in Sub-Saharan Africa, South Asia, and Latin America, which together account for 55% of the developing world's population. The report also finds that “climate migration will likely rise through 2050 and then accelerate unless there are significant cuts in greenhouse gas emissions and robust development action”.

Within the academic field of research on climate change, many studies have turned to new models for conceptualizing climate change and its societal implications. Large amounts of data have been seized using applied econometrics methods to climate-related problems in order to better understand how environmental change and conflict both lead to migration and how this works. According to these studies, climate is rarely the primary cause of migration, but it is almost always a contributing factor.

Climate migration is defined as “the spectrum of climate change’s relationship with human mobility - including the circumstances of “trapped populations” for whom migration is not an option despite exposure to climate-related threats” (US Report on the Impact of Climate Change on Migration 2021). This part of the world leaves tens of millions of people with limited options in which misery and insecurity reign.

As climate change, water shortages, and undernourishment drive people away from rural and at-risk areas, millions seek a better life in big cities, fueling a rapid and increasingly overwhelming urbanization (The New York Times). The COVID-19 pandemic has tested populations on their capacity to deal with uncontrolled and unpredictable events. As the dynamics of climate migration have become more recognized and focused upon, the potential for large-scale movement should be significantly larger.

However, there appears to be a lack of socio-political responsibility and willingness to deal with mass migrations in terms of economic preparation and cultural perceptiveness towards individual and collective changes in livelihoods. According to the UNHCR, climate change is the defining crisis of our time and migration one of its most devastating consequences.