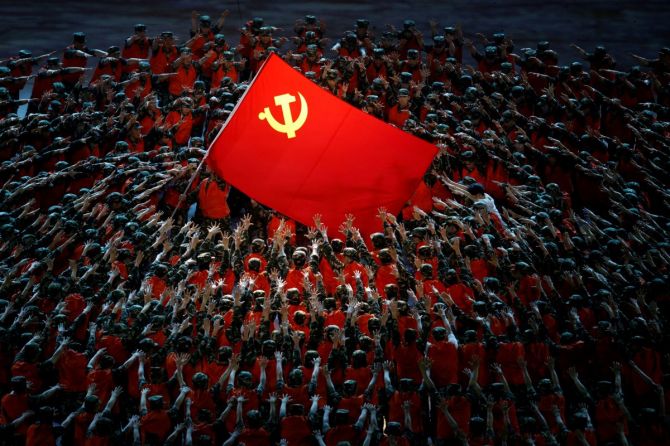 Chinese Communist Party completes its 100 years in July 2021. The party led the foundation of Communist China and has brought China where it is today. China, under CPC, has transformed itself magnificently and has become 2nd largest economy in the world today. The citizens of China accredit the transformation of their country to the Chinese Communist Party too. The leaders of CPC have had different motives and goals for China to achieve and it is rightly said China ‘zhan qilai’ (stood up) under Mao Zedong, under Deng Xiaoping, China ‘ju qilai’ (became rich) and now under Xi Jingping, China is ‘qiang qilai’ (becoming powerful).

Chinese Communist Party was founded in July 1921 by Mao Zedong. Mao was a strong believer of communism and wanted a communist China, free of any foreign interference. In the Civil War (1945-49) between right-wing Kuo Min Tang (supported by USA) and CPC (supported by USSR); the Communist party won and found the independent People’s Republic of China. Mao’s policies were largely agrarian as the Chinese economy was focused on agriculture at that time.

In the beginning, Mao followed Stalinism. Then in 1957, the 100 Flowers Campaign was brought out by him, in which, feedback was taken by the citizens and party cadres. After this, the Great Leap Forward came. The reforms in the GLF were decentralized and agrarian-based. The light industry was focused upon, unlike Stalinism, to improve the standard of living of the masses.

China follows One Party System of polity. In this system, the governance is done by the party largely, rather than the actual government. The people can only elect a leader but cannot change the party, like in the multiparty system in India.

The leader of the CPC after Mao was Deng Xiaoping. He was the one who brought major economic reforms and he laid the foundation of modern China. Even though he shifted to capitalist ways of growing the economy, he did not compromise the One Party System. Protests for democracy were crushed during his time and the historical Tiananmen incident also happened during his leadership.

Deng made some historical, prudent reforms to make China a superpower that is not scared of the world. He implemented the open-door policy. In this, he removed trade barriers, reduced custom duties, allowed FDIs in SEZs, SEZs were established, and many more. This has been moved forward by current leader Xi. Today there are 38 SEZs, where all major MNCs are manufacturing their products. China ranks 31st among 190 economies in the Doing Business 2020 report released by World Bank. China has also signed 19 free trade agreements with 26 economies.

Deng firmly believed that China cannot forget and deny its history. He was of the opinion that if China was to achieve its economic goals, then it cannot afford chaos. China needed political stability to grow and Deng gave it by having a strong centralized Party. Economic growth has always been the chief plank of governance for the CPC, from Deng to Xi.

Deng opened the Chinese economy for trade but didn’t allow any foreign power to interfere with China’s internal matters. China calls the period of colonialism as “Century of Humiliation”. They do not let themselves forget the humiliation caused during that time. It has built itself so strongly that no one can again bully China and the past could not repeat itself.

This was also reflected in a speech given by President Xi Jingping on July 1 at the celebration of 100 years of CPC. He said that anyone who tries to bully China “will face broken heads and bloodshed.”

Single party led China stands as a great example of socialism in practice. China with its free market-based economy, practices socialism in its polity. CPC has been able to stay strong and channel the nation’s energy into what matters and has overcome conflicts over time. In order to remain a socialist state, China has curbed some political freedoms, established stringent media rules. Since the 18th National Congress in 2012, China adopted ‘socialism with Chinese characteristics”. Sun Weidong, Chinese Ambassador to India said in a message- “CPC was born for the people, prospers due to the people, and be rooted in the people.”

China has largely emerged in all spectrums- economic, science and technology, space, social. Poor China at its independence has become the second-largest economy in the world and has the second largest army in the world. China has lifted 800 million people from poverty and has become an upper-middle-income country. The only major economy to achieve positive economic growth in 2020 amidst the Covid-19 pandemic was China. Coming out of a global pandemic, which ironically took birth in Wuhan, China, the country had a positive growth of 18.3% in the first quarter of 2021.

China is slowly increasing its global influence with the Belt and Road initiative. Under this, it plans to develop and expand globally. In May, this year a Chinese company acquired a port in Sri Lanka, India’s neighboring country. China is also planning to expand in the North China Sea, where it is facing other superpowers of the world. China is also in dispute with India on the Pangong Tso area in Ladakh since last year.

China has grown insignificantly in the past 70 years. Chinese Communist Party has made its place intact in the hearts of the people of China by giving them welfare and economic growth. But, China has a few challenges ahead. China is one of the most unequal societies in the world. It is the largest carbon emitter in the world, and without China’s cooperation, any global climate change activity would be unsuccessful.