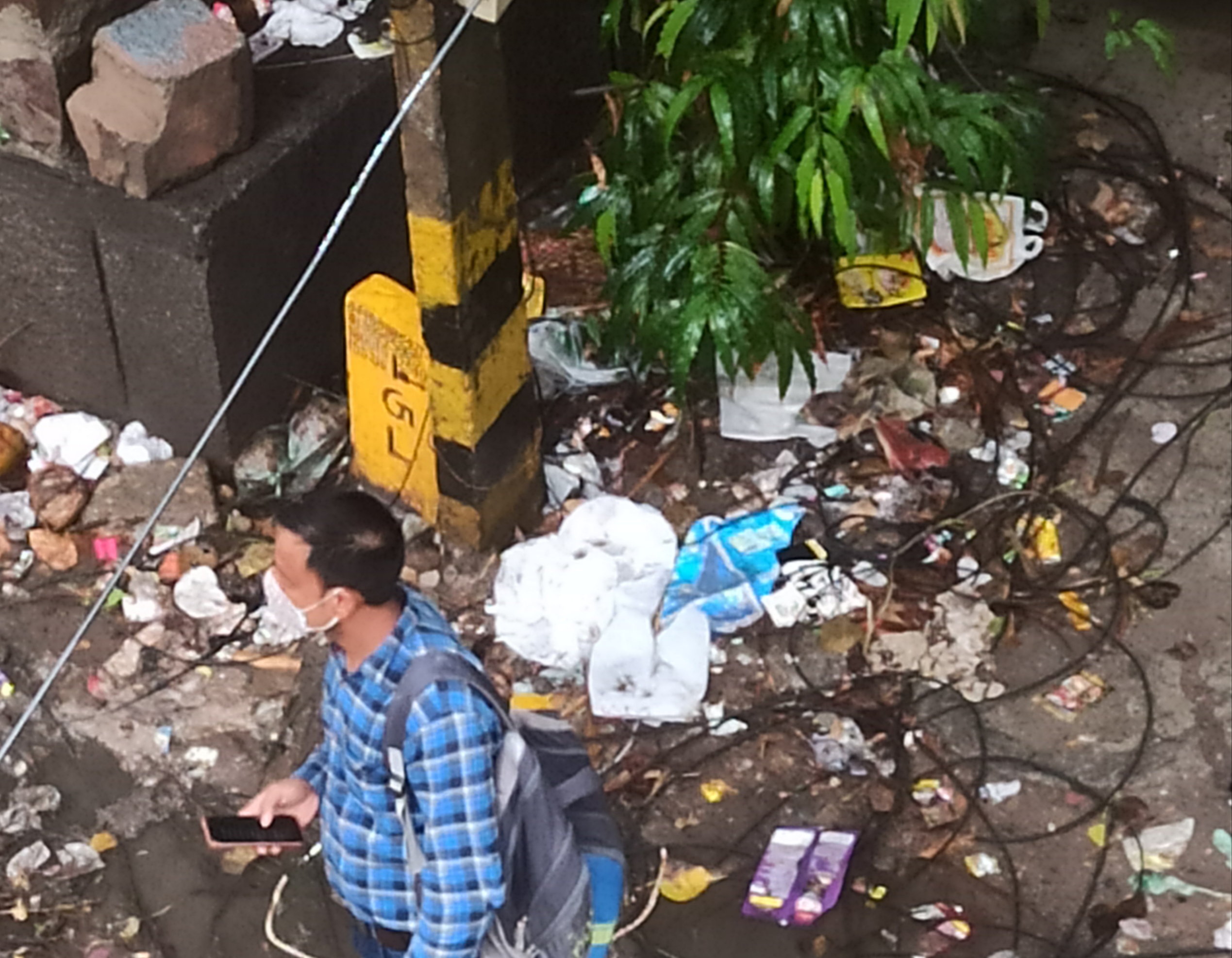 For quite a long time, the East Delhi locality, particularly East Krishna Nagar, has been suffering from a problem that on a first look seems like just another issue where the management system is messy. But upon carrying out a deeper analysis, it comes to notice that it is a shared problem and a dangerous issue caused by the residents of the area as well - garbage disposal on streets.

Only 44% of East Delhi’s pay for trash disposal facilities at their front door. Garbage, mostly plastic debris, is placed on the road in several residential neighborhoods and sometimes stays there for long periods causing a greater unsanitary situation. Due to the lack of bins, homeowners dump rubbish on the roads, where dogs and other birds and animals scavenge and consume it. The starving animals many times just to fulfill their need to fill their stomach, break open the polythene bags which leads to a huge amount of garbage getting spread unevenly on the road.

Animals commonly confuse abandoned plastic items for food, both on land and in the sea. Animals' stomachs are unable to digest plastic. This could be harmful to their health and perhaps result in their death. Animals are also vulnerable to dangerous waste items, such as biomedical waste, which may include infections that are deadly to humans.

The residents of the houses who have to bear the brunt of unwillingly witnessing their house corner become a site of garbage dump also claim that residents from nearby streets also put garbage on the road and most of the time on the corner edges of their houses. This happens because on finding an existing pile of waste on a random street, allowing garbage to accumulate in one location leads to increased littering. People have an unfortunate sense of belief that throwing garbage atop an existing waste pile is the right thing to do. Discarded garbage or leftover debris from the construction of residential and commercial structures is sometimes thrown away in inconvenient locations.

Several complaints have been filed against this issue before as well but most of the time it results in a conflict of opinion as well as claimed action; city officials claim that dumpsters are available on street corners, but that inhabitants do not utilize them. Residents, they claim, dump waste in any convenient location that cannot be cleared immediately. Because collection will be difficult, bins cannot be installed on every block. Hence, residents should cooperate with conservancy workers, they say. On a completely different stand, the people of the neighborhood are always found merely blaming the management system, many times for their shortcomings which they are too unwilling to admit.

Section 279 of the Indian Penal Code makes littering a felony. Unfortunately, in India, it is still a frequent practice. It places a significant financial burden on local governments, which must spend crores of rupees cleaning up streets, sorting rubbish, and eventually recycling it. Rubbish pile-up can be exacerbated by a lack of effective waste management bins and roadside garbage bins, which, in turn, can exacerbate the problem of garbage pile-up.

Moreover, with the onset of the much-awaited monsoon season, the issue is getting elevated at a pace faster than ever. When it rains, it is a known and fact that a lot of streets of Delhi overflow or get clogged with rainwater. Amidst such situations, when the already placed and thrown garbage on the street corners gets mixed up with the rainwater and soil particles, it not only results in an extremely bad and intolerable odor, but also creates a very wet, muddy, and unclean path that almost none of the residents would even dare to put feet in. In such conditions, the risk which surrounds human life rapidly increases.

Waste can affect people in a variety of ways if it is not adequately segregated and collected. Carelessly tossing cigarette butts, for example, can cause fires. Pests and diseases can spread if food products are littered. Unkempt trash cans or dumpsters could be breeding grounds for malaria- and dengue-carrying mosquitoes. Biohazardous material can also end up in bodies of water, contaminating them.

People often resort to littering when there are no suitable garbage disposal facilities, such as roadside bins or trash cans.

Carelessly depositing garbage along the sides of the road, on the streets, or in water bodies can result in poisonous materials or chemicals being swept into rivers, oceans, lakes, creeks, and forests, among other places. Pollution of streams, land, forest areas, soils, and aquatic habitats will eventually result from this garbage.

In India, waste management is governed by the Ministry of Environment, Forest and Climate Change (MoEF) and the State Pollution Control Board. Not only is appropriate garbage disposal emphasized in the National Environment Policy, but also recycling and waste treatment operations.

“Placing signs expressing the importance of segregation is insufficient. The masses must comprehend this message. Delhi's municipal governments claim to be constantly broke. They must, however, be more imaginative and knowledgeable if they are to preserve the city. They must ensure that garbage is collected and transported in a segregated manner.

India is quickly devolving into a gigantic landfill. The problem is exploding, and the figures are staggering. Urban India is the world's third-largest trash producer, with 436 million tonnes of waste expected by 2050.

When it comes to waste management in India, nothing is quite right. Our country produces about 62 million tonnes of solid garbage each year, according to a 2009 estimate from the Central Pollution Control Board, of which only around 20%, or 12 million tonnes, is treated. As a result, the remaining 52 million tonnes of rubbish will be left untreated, polluting the environment.

Last year, the Central Pollution Control Board (CPCB) sent legal notices to municipal commissioners in 184 towns to ensure proper sewage and solid waste management. However, no significant action has been taken to date.

An expert at the Centre of Science and Environment believes the government should focus on innovative garbage disposal and recycling technology rather than expanding landfill sites. Because the current waste disposal system is defective, most dump sites are overflowing.

Following a four-bin system is recommended. Simply put, segregate your garbage in your home. Put kitchen garbage or organic waste in a green bin, inert waste (waste that is not chemically or biologically reactive and will not degrade, such as diapers) in a black bag, recyclable rubbish in a white bin, and hazardous waste in a black bin.

The lack of awareness in society for such sensitive issues is indeed a reason for concern and calls for immediate action. Many people are uninformed of the negative consequences of littering, thus they continue to throw waste into the environment with no respect for the environment. This issue is not restricted to just the East Delhi area; littering is a problem that affects both urban and rural populations. Health and safety initiatives, as well as other types of public awareness campaigns, should clarify the cause-and-effect link between littering and the environment so that people may make informed decisions.

You have highlighted a serious issue.... Nicely articulated 👍👍👍