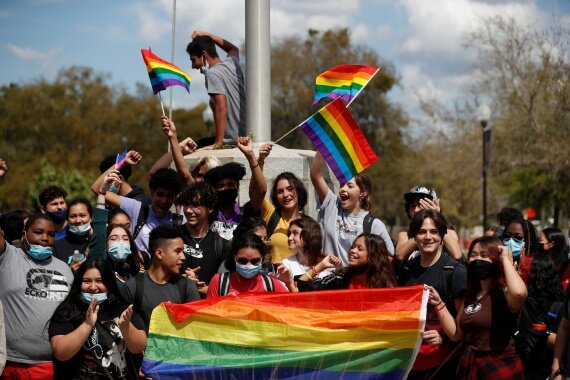 Monkeypox is the latest disease that is causing great fear of its spread. However, the information about the existence of infections among homosexuals has created an assumption about the LGBT community among many. Will social stigma turn into an obstacle that blocks efforts to confront the disease?

The world fears the spread of a new epidemic that will return humanity to the deaths and sickness that accompanied the Covid19 pandemic, the closure of borders, and the imposition of a health curfew. Today's concerns are related to "Monkeypox," which has been documented in at least 15 countries worldwide, prompting senior officials, including US President Joe Biden, to warn of the possibility of its further spread.

However, what is different this time is the attempt of groups within social networking sites to link the disease to homosexuals and to try to hold this group responsible for its spread. The story began since news reports spoke of infections among the LGBT community, especially with the Belgian authorities linking three infections to the “Darklands” festival, which witnesses a significant presence of gay men.

"From my personal environment, I see that most people who are not familiar with this disease accuse the LGBT community of spreading it, and that, in itself, is a kind of hatred and racism that may increase aggression towards LGBT people," says a Moroccan gay who preferred not to reveal his identity to DW Arabic, continuing that " A small group of homosexuals are the ones who lives their lives normally despite hatred and difficulties, while the majority conceal their inclinations and do not declare it except within a group that shares the same inclinations.”

According to Susan Hopkins, chief medical advisor of the British Health Security Agency, a substantial number of the cases reported in the United Kingdom and Europe were found in gay and bisexual men. According to official statements on the British government website, the official encouraged this group to pay attention to symptoms.

David Heymann, a senior consultant with the World Health Organisation, told the Associated Press that two concerts, the first mentioned in Belgium, and the second in Spain, are theoretically the reason for the spread of the disease in this way now. However, he stated that it appears that "sexual contact contributed to raising the level of infection, while the organization itself indicates that the spread of the disease is unusual and that the presence of cases in several countries indicates the possibility that it has been spreading silently for some time."

In America, the Centers for Disease Control and Prevention warned that the disease is spreading in the community of the aforementioned sexual groups. And John Brooks, according to CNBC, stated that many of the infected people across the world are gay and bisexual men. Still, at the same time, he warned that the danger is not limited to those groups, although some of them are currently more vulnerable to infection.

Because of the proliferation of homophobic comments, UNAIDS warned that similar publications "may rapidly undermine efforts to combat the epidemic." They also stated that such campaigns "create a cycle of fear that leads individuals to avoid health centers and limits the scope of efforts to identify cases of infection and encourage ineffective coercive measures.

It is worth noting that Monkeypox is not new and did not originate, contrary to some comments, from sexual relations. According to the World Health Organisation website, the disease was first discovered in the Democratic Republic of the Congo in 1970 in a nine-year-old boy. Furthermore, the disease is zoonotic, meaning that it is transmitted through contact with infected animal fluids, including monkeys and wild dogs, or even human consumption of undercooked meat.

Homosexual and bisexual men have consistently suffered from the stigma associated with infectious diseases. They have been accused of being the source of AIDS, knowing that this disease can be transmitted in other ways, including sex between heterosexuals, as the mother transmits it to her child during pregnancy and through contact with infected blood. So Andrew Lee, professor of public health at Britain's University of Sheffield, writes in an article for "The Conversation."

He states that information on this disease is not a disease of sex between males as it is not related to sexual orientations. He added that infections are caused by physical contact and not necessarily sexual and that if there is a large percentage of infections among gays, it is due to their social contact. The disease can easily spread between a heterosexual network, a group of athletes, or other social groups.

"The misleading rulings today remind us of what happened in the eighties when AIDS was considered a plague of God's power over homosexuals because they practice practices contrary to nature, which are unfounded accusations and we consider it as ignorance," says Mounir Baatour, founder of the Shams Association for the Defense of Gays in Tunisia.

Baatour continues, in connection with an Arab DW, that "the LGBT community already suffers from oppression and humiliation in Arab societies." Baatour does not believe that this rumor will increase this stigma because the degree of hatred for homosexuals, in his opinion, is very high in Arab societies and does not need an additional factor.

Abtour stresses that among the solutions is the courage of gays on social media, expressing their opinion on this phenomenon and demanding their rights. The spread of monkeypox also requires health authorities to provide services to homosexuals without discrimination. This group, especially transgender people whose identities do not match their official documents, suffers a lot of contempt when searching for health care.

The harm of these campaigns does not depend on the LGBT community alone. Instead, it extends beyond that to every potentially infected person, regardless of their sexual orientation. As a result, there are concerns that potential smallpox patients will avoid seeking treatment for fear of being questioned about their sexual orientation and how they caught the virus.