The Significance of The Women’s March 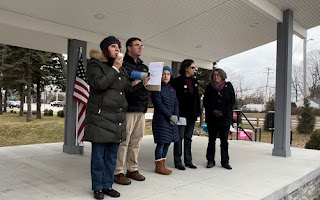 The Women’s Rights movement can be viewed as a second Women’s Suffrage movement. Once again, people are standing together to fight for the equal rights of women in the constitution. Women will continue to fight until their rights are viewed equally with those of men by the government, which is why the Women’s March is still significantly important.

The Women’s Suffrage movement was originally started by Lucretia Mott and Elizabeth Cady Stanton in July 1848. They organized the first Women's Rights Convention in Seneca Falls, NY. Women gathered to discuss the potentials for women's rights, including broader educational and professional opportunities, and the ability to control one's own wages and property despite being married. After the historic meeting, the topic of voting rights began to gain traction with the public.

The first Women's March was held on March 3, 1913, the day before the inauguration of Woodrow Wilson. More than 5,000 supporters convened to fight for justice. Many came on foot, horseback, wagons, and other methods of transportation. There were costumes and various other props present at the march. Among the marchers were various celebrities, including Wilson’s own niece and the actress Margaret Vale.

Throughout the years, women across the nation have bonded together to gain the rights they know they rightfully deserved. Many women fought through hunger strikes, silent vigils, protests, and picketing to be seen and heard by the legislators. After 69 years of fighting, protesting, and standing up for one's own civil rights, on June 4, 1919, the 19th Amendment was passed into law. However, the fight didn’t end there.

The Largest March in the U.S.:

In 2017, President Donald Trump, a known misogynist, was elected as president. Trump was known for quotes such as, “If Hillary Clinton can't satisfy her husband, what makes her think she can satisfy America?", "If Ivanka weren't my daughter, perhaps I’d be dating her", "I think the only difference between me, and the other candidates is that I am more honest and my women are more beautiful”, and many more. Women feared for their future with a president as open to his true beliefs toward women as him.

On January 21, 2017, the day after the inauguration of Trump, a Women’s March was held as a worldwide protest against the potential new policies. It was the largest single-day protest in United States history. The goals of the movement were human rights, women’s rights, healthcare, reform, disability, justice, immigration, reform, reproductive rights, racial equality, the environment, LGBTQ rights, freedom of religion, workers rights, and tolerance. The main protest was held in Washington D.C. and drew nearly 500,000 people to its streets.  Although the protest ended after the next day, the fight for equality did not.

In 1970, an anonymous woman by the name of Jane Roe sued Henry Wade, the district attorney of Dallas, Texas for the law making abortion illegal except by orders to save the woman’s life. Roe claimed the law went against the First, Fourth, Fifth, Ninth, and Fourteenth Amendments by being unconstitutionally vague, and diminished her right of personal privacy. Roe’s attorneys, Sarah Weddington and Linda Coffee, wanted to fight Texas’s state abortion laws and hopped on board the case.

January 22, 1973, Roe v. Wade was passed into law, when seven out of nine Supreme Court Justices agreed that the 14th Amendment implies a right to privacy. The justices did recognize, however, that states would be able to hold limits to the abortions as the fetus grows and becomes more viable. Regardless of limitations, abortion became legal federally in the United States. However, nearly 50 years later, this ruling would be overruled.

June 24, 2022, Roe v. Wade was overturned by the Supreme Court. The Supreme Court Justices, in a six to three decision, voted that women do not have the constitutional right to choose whether or not to have an abortion. In Dobbs v. Jackson Women's Health Organization, the only licensed abortion facility in Mississippi filed a lawsuit, claiming that the Mississippi ruling of the “Gestational Age Act” was unconstitutional. Despite how the country felt about Roe v. Wade, the Supreme Court saw that the constitution did not protect abortion rights.

Since that day, people have been fighting for their rights to be reinstated in the constitution. On January 22, 2023, on what would have been the 50th anniversary of Roe v. Wade, people from across the nation gathered in protest in what was named “Bigger Than Roe.” According to the movement’s website, “We are not going gently. We are taking our fight to every state in this country on January 22, 2023. We are putting all politicians on notice: If you come for our families, our freedoms, or our future, we are coming for your seat.”

I had the privilege of attending a protest in Port Jefferson Station, NY. The protest was held by the Brookhaven Town Democratic Committee Women’s Caucus. Once I arrived, I was handed buttons and signs that read, “Protect safe, legal abortion,” “I stand with Planned Parenthood,” and “Bans Off Our Bodies.” Cars were honking as they passed in both support and disagreement. Once the protest began, there were several speakers. The speakers walked together in the pavilion including Lisa Eguizabel of the organization, who introduced everyone.

Eguizabel spoke into the megaphone, “Reproduction rights and control over reproduction, to the individuals, are absolutely essential for women and persons that can become pregnant.” As people cheered for her in agreement, she introduced more speakers such as Dr. Bettina Niederer, a retired doctor who told the stories she remembered of the days before Roe v. Wade. She expressed the horrors she witnessed as a doctor seeing women die from unregulated, illegal abortions.

“They died because they were infected because they had illegal abortions. And when we asked them why they were so sick, they wouldn't tell us,” she said. People were more scared of the law then they were of their own health.

Following the speakers, everyone chanted together in sync, “My body, my choice,” as we gathered together by the pavilion. Once the two hours had gone by, it was time to pack up the flags and tables and head home. But heading home did not mean it was over.

Although there have triumphs in Women's Rights history, there is still much that can be done. Women today are still fighting for gender equality. Daily women are victims of violence, discrimination, and institutional barriers. Women will not stop fighting for their rights until they are treated as equals, legally and systematically. The fight continues everyday for women's rights, the Women’s March is only a part of the fight to get the world out. The fight doesn't end when you go home, it's only the beginning. Go out and vote for your local officials and make sure they're standing with you and for your rights. Your rights matter. Women’s rights matter. All genders’ rights matter in the fight for reproductive rights.