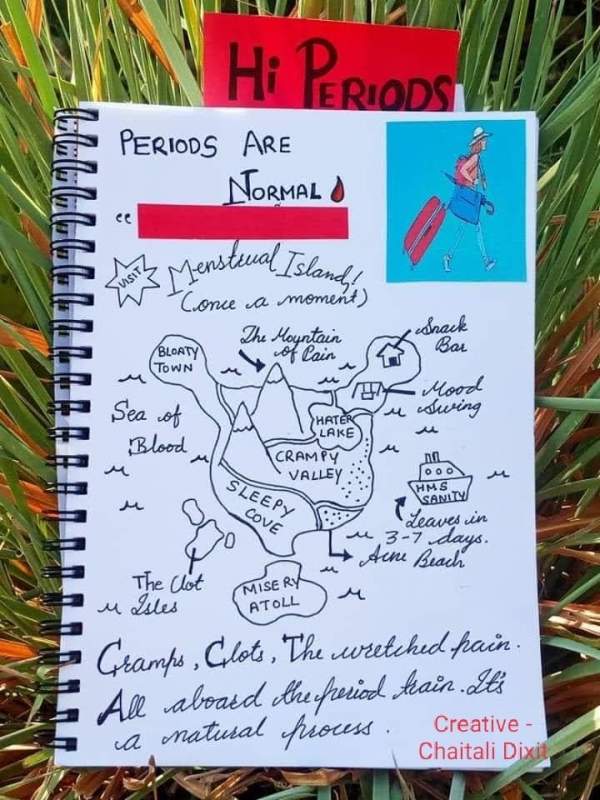 Do we live in the 21st century? Well, the response on your mind as you read the title of this article might say whether you belong to the 21st century or just have narrowed the stigmatized mentality of the 1980s. The world might have seen a tremendous revolution in technology, Science, Art, Business, but the human mind seems to be an Old Stone Age man when it comes to 'Periods.' Pardon me, this word in itself is silent, just like the rights of women always tried to be suppressed and sabotaged. In my recent visit to Kerala, I happened to enter a Chemist shop to buy routine medicines. When I watched middle-aged women enter the store, I saw that they were hesitant to ask for sanitary napkins. She waited for the male customers to go before whispering to the female sales staff, who wrapped it in two layers of newspaper and handed it over to her with a black cover. Next time she should perhaps send a dove messenger with a secret code specially designed to buy Sanitary Napkins. That way, no one would ever realize that purchase.

This unnecessary stigma around periods leads to period shaming. Women are socialized to have a negative attitude toward periods from a young age. Women who are going through their menstrual cycles are considered unclean. The taboo has been deeply conditioned and passed down from generation to generation that even now, young adolescent girls find it awkward to discuss their periods. Why is it that even after increased awareness and higher literacy rates, any topic involving women is so volatile? Two years ago, a case was filed against a Gujarati school that stripped female students to see if they were menstruating or not!!! This kind of hideous crime will only happen in India. Thanks to our old age religious monsters who defined the purity of women in their menstrual cycles. The school had strict rules for separating menstruating women. They were supposed to sit on the last benches during menses. They cannot enter the temple, kitchen, or hang out with rest kids during their cycles. The school went to the wall of fame by keeping a record of each girl's cycle dates so that they might be tracked down. The incident happened when girls stopped entering the dates for two months. It triggered the warden, and she forcefully stripped the girls to inspect whether they were menstruating or not.

This incident has left lifelong trauma in the minds of those kids. Can you imagine what a nightmare this is? And to be precise, a woman did this crime!!! Of all, she might be someone who understands or connects more with the girls, but without any shame or humanity, she posed such behavior. Most of the time, I wonder that why do women end up being each other’s enemies? Why do they stigmatize periods till today? Upbringing it is!! No matter how far a person travels, how long they live, or how well educated they are, the foundation of their character remains rooted in their childhood. In our family, we instill a lot of behavioral habits. Traditionally, a girl child's period is made to shame and embarrass her. They were not allowed to enter the kitchen, perform cooking or cleaning tasks, and visit the temple. In the past, they were forced to eat off different dishes, sleep in separate rooms, and so on. Although semi-urban and urban areas have progressed beyond these immoral activities in rural areas, women continue to face this unexplained humiliation. It is a grave violation of human rights, a significant suppression of women, and emotionally devastating.

Till today menstrual hygiene is a luxury for most women. Rural and underprivileged women still do not have access to sanitary napkins due to sticking to old methods of using cloths as a substitute or simply because of not being able to afford the sanitary napkins. Poor menstrual hygiene can lead to several serious illnesses, including fungal infections, urinary tract infections, and cervical cancer. I must admit that as a child, I had the advantage of using sanitary pads and was well-versed in their proper application. But as I heard stories of what my mother had to go through; tears welled up in my eyes. Instead of sanitary pads, they used cloths. During their cycles, they bathed and washed their clothes at a separate pond. Those three to four days were horrible for them. They used to keep wondering about stains, bearing the leak, irritation, itching, etc. Many women used to suffer severe infections due to this unhygienic and redundant approach towards menstruation hygiene.  Well, after relentless and appreciable efforts of geniuses like Arunachalam Muruganantham(PadMan) and various other NGOs and government initiatives. Menstrual Hygiene has gained attention, and we have seen some revolutions in this arena.

What should we do to stop Period Shaming? When will we see a change? When will our girls say "Daag ache hain"? When will a girl go to the chemist and boldly ask for a Pad?

Well, they say charity begins at home. Treat your girl like a menstrual goddess if you want her to bleed with pride. Educate her and encourage her. Make her aware of the menstruation cycle. Discuss with her how menstruation benefits her body by removing impure blood. Women are given menstruation as a gift. According to some medical authorities, menses cause women to age more slowly, due to which women have a longer life expectancy than men.

While taking her to the chemist, make her hold sanitary napkins in hand like you would hold a pack of bread. If you would buy swipes from a chemist, will you cover them up in a dark black cover? No. The same applies to sanitary napkins as well. Next time if you see your mom having mood swings, let her take an off. If you see your colleague experiencing a bad day because of her periods, give her a half-day or get a small chocolate brownie for a change.

If we educate the existing and upcoming men and women to normalize periods, then by next 10 years we can surely see the difference. We need to impart wisdom and liberate our girls from the notion of menstrual stigma. A period is the only time when blood is shed without violence so, why suppress it? Why link culture and religion in menstruation? What does a woman’s purity have to do with her menstrual cycles? Let’s awaken our girls to bleed with pride, and let’s teach our boys to buy them a pad when in periods rather than humiliating or shaming them or barring them in the name of cultural ties.