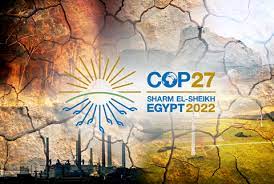 The COP27 concluded in Egypt’s Sharm el-Sheikh the previous Sunday with a breakthrough. The loss and damage fund for the most vulnerable nations to climate change was finally established after a hard-fought battle. This battle was long, but it yielded the desired result.

Pakistan played an essential role in this achievement. After the development, the Minister for Climate Change of Pakistan, Sherry Rehman, was applauded worldwide for this commendable effort. She led the bloc known as the Group of 77, plus China, who kept all united in this effort. The negotiations were held around the clock to finalize this before the COP27 participants headed home. Pakistan fought hard for the loss and damage fund to be included in this year’s agenda of the United Nations climate Summit.

The ‘loss and damage fund’ is one of the most critical steps in this fight against climate change. The powerful nations had long been resisting the compensation fund due to all kinds of legal liabilities. These countries are solely responsible for the drastic climate changes that had devastating consequences for the countries which played little to no role in this. Industrialization and consumerism by these countries have caused irreversible damage to the global environment.

The insurance policies will not be able to cover the damages of this crisis ensued by climate change. Therefore, this loss and damage fund was crucial to be established and accepted. The Global shield initiative announced last week was also a breakthrough in climate finance. But this initiative has limited scope in compensating for the damages suffered by the most vulnerable nations to climate change. The idea behind the loss and damage fund is that the countries which are paying the price for climate change must be compensated by those who are responsible for it.

According to United Nation’s Chief Antonio Guterres, “We are on a highway to climate hell with our foot on the accelerator.” All of us are in the fight of our lives, and we are losing. Planet Earth is fast approaching tipping points which will make the climate chaos irreversible. The purpose of these summits is to reduce carbon emissions and greenhouse gases. But the global temperature keeps rising, and greenhouse gases keep rising. The goal is to keep the temperature of the Earth well below 2, preferably 1.5 degrees Celsius target. This was the primary purpose of the Paris Agreement. However, we will be crossing 2 degrees in the coming years.

The point of no return seems to be near, and Guterres called for a Climate solidarity Pact. The G20 countries need to work on their transitions and take extra steps to tackle this crisis before it gets out of hand. For now, the nations most vulnerable to this crisis are experiencing deadly consequences. Eventually, these will reach the countries responsible for climate change.

Establishing a fund and operationalizing it are two different scenarios. In 2020, USD 100 billion was promised as climate aid which still has not been delivered. However, this loss and damage fund is a promising step toward compensating vulnerable nations, including Pakistan. This fund draws on contributions by developed countries and multilateral development banks, which will collectively make up climate finance.

The fund, as of right now, does not have anything in it; these countries and banks are urged to mobilize their efforts toward this climate finance. The technicalities regarding this fund, like which government is supposed to pay what amount, have still not been decided. And amid the debate surrounding this loss and damage fund, no imminent steps have been taken to mitigate global warming. This question has long been avoided by these nations that have played the most role in the current climate change crisis. The survival of the human race depends on this very aspect. We are at a point where we decide whether our future generations have a planet they can continue living on.

The Fund is indeed a victory and a hard one at that. However, it needs to be brought into action soon enough. The countries that have suffered the consequences of global warming and will face even more dire ones in the future need to be compensated. Pakistan needs all the help we can get along with working on policies and agendas to ensure our survival. We are one of the most vulnerable nations and have seen and suffered the drastic consequences of global warming. It is a long road ahead.