"We consider a girl getting up on a bar flashing her tits as party behavior, not a sex crime.” says sexologist Timaree Schmit.

Secret societies have opened new doors for sexual liberation. Exhibitionism has become a go-to method for expressing repressed sexuality. It may evolve into the building blocks for a society that will eventually be devoid of voyeurism.

The need to express one's sexuality is important when it comes to self-esteem. Body shaming and runway standard of beauty have become social regulations that keep us from loving ourselves. People have become concerned about their score of sex appeal to maximize their chances of having the best options for copulation. This is a social fetish. When society frowned upon lesser scores of sex appeal, they found hope in exploring sexuality over cyberspace. Image boards and forums like the Wizardchan have been feeding off on the desires of people to be part of the human escapade for self-esteem.

Apart from a regular intercourse routine to trying out something new, people have pushed their adventures. From crowded metros to dark corners of an over-bridge, people have found sexuality a legit reason to act like animals. This topic happens far away from the notions of non-consensual sexual behaviors. The need to feel important, confident about one’s body to get the attention and respect like celebrities have become the roots of a society that asks the question, 'Am I sexy or hot?'

Below are some discussions from an online forum that reveals exhibitionism has become an act of sexual liberation. 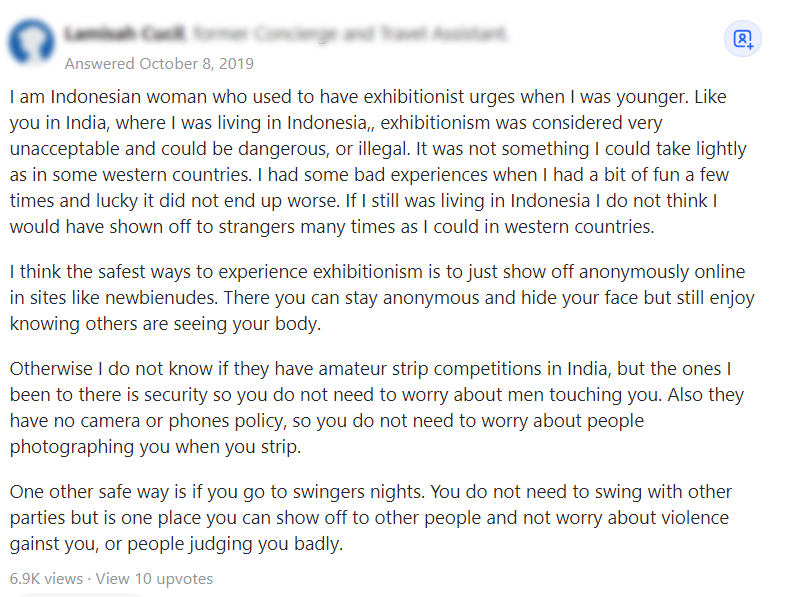 The meaning and definition of exhibitionism differ from miniskirts to sleeveless tops, from innocuous grey sweatpants to cleavages. It focuses on the behaviors of exposing themselves for sexual gratification of any sort. The practice has always been active in cyberspace, but with the boom of chat spaces, live cams, and so on, the accessibility to fetch one among the desired fantasies has become viable. Chat spaces are a huge success because of their ability to mask the user’s identity. It is the only available space where one can speak to a large audience irrespective of age, gender, or geographic belonging.

At the first look, it could be viewed as the option for sexual advice and exploration of sexuality in a society that condemns such an open attitude. At its core is the juicy part that has created social standards from hearts and likes. When nudity is scorned in public, it has become the new bold. Curvy females and hunky males are influencers who taught that the only way to be socially acknowledged is by a good physical appearance. And finally, it can converge people to fulfill their darkest desires, their secret fantasies, those that are taboo to speak of in their own houses. Studies show that people with heavy chains on sexuality (especially if in their family) are more in need of sexual confirmation from society. This may be understood by learning how the Burkha in the 21st century transformed into skin fit, revealing the curves. In the most appreciated manner, exhibitionism through shared photos has also been a strong answer for physically separated couples to bolster their intimacy. The answer to all these sexual frustrations became exhibitionism.

Exhibitionism, for good or bad, has always left its mark on the victim. Traumatizing cases of indecent exposure is why it is illegal on most lawful lands. Healthy methods of exhibitionism are the only responsible option. How to start and fulfill your exhibitionist desires is one of the many queries you can find information on various online spaces.

Have a look at these FAQs: 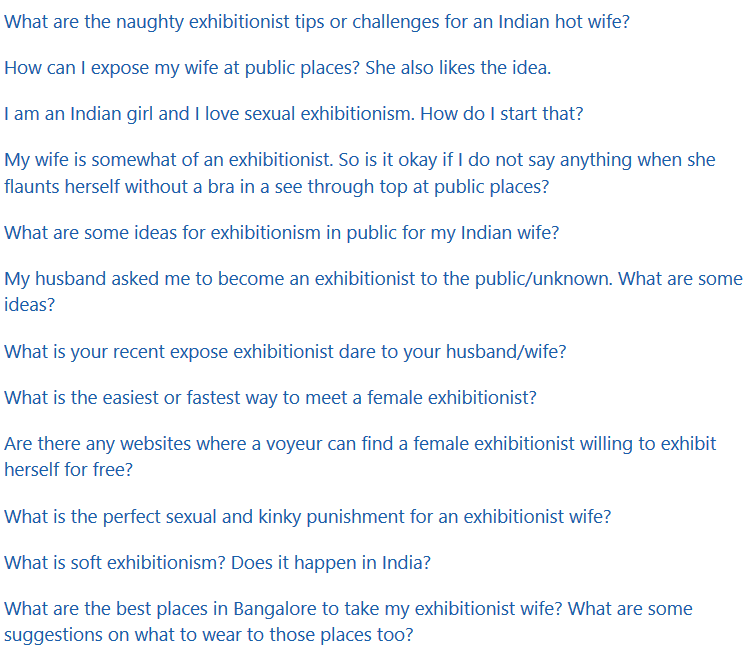 India has grown up its own culture of exhibitionism. From the unhealthy days of flashing in public to healthy ways of going kinky with a consented adult(s), exhibitionism has changed the social scenario of keeping the sex taboo.

From ordinary sexting chat rooms to the sex chat groups and communities of Facebook and Tumblr, the culture has grown. Supported by various networks like Craigslist, you can get to events and meetings for sex parties, orgies, and swinger parties. Platforms like Reddit and subreddit groups that promote private NSFW contents; r/exhibitionist-India or the r/indiansgonewild, some of which taken down, are safe places for expressing sexuality. Websites that provide live cam services like the free Omegle, Tango Chat, BongoCams, or the ones like OnlyFans that enable you to make a little money from your fantasy are the platforms that empowered people to explore their sexuality.

Sexual interaction can be practiced anywhere if consented to. The only key idea is to get away with it even if it gets noticed by others. From groping in public transports to fornication in parks, people have explored the loopholes in society. The constant risk of one’s identity and the permanent damage it may inflict on them and their family should be considered while selecting places and people involved in the act. Societies, online forums, and chats are places where you can find genuine and trustworthy connections that help you explore the exhibitionist culture more discreetly and safely. Reading and getting opinions and instructions from people who have tried and experienced is a sensible way of pursuing the practice, and keeping your private desires safe and secret.

In the less evolved society, morality was the core ingredient of relationships like love, family, and friendship, but today it is more related to happiness, gratification, and sexual expression. This has corrupted society into believing that all social relations and structures have evolved into these contexts. Today, fashion and self-expression are two of the most advocated topics that society has misunderstood for exhibitionism.

Remember the time, when we imagined more skin exposure may neutralize voyeurism? Now, have a look at the new challenges that have emerged putting the remaining social constructs hanging.

I like the question you placed in the conclusion, hope it will be answered