'Kanyadaan': Does It Serve Any Purpose Even In The 21st Century? 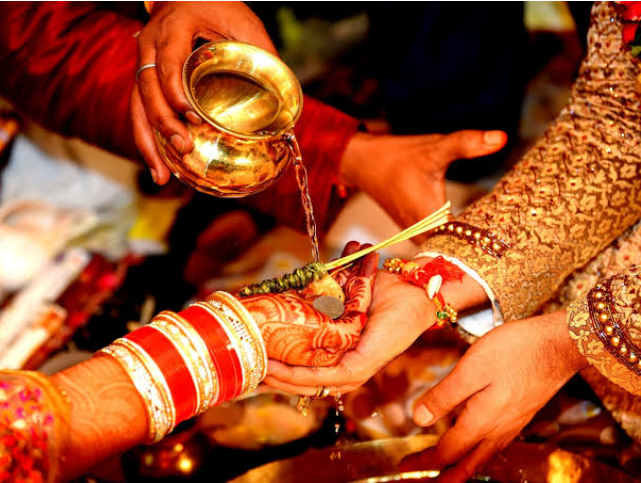 'Kanyadaan' is a Sanskrit word which signifies - 'kanya' means 'girl' and 'daan' means 'giving away', so 'giving away the daughter'. In Hinduism, it suggests when the parents give away their daughter to the groom, as a 'daan,' or 'gift'. You might be surprised to hear that there is no such reference to 'Kanyadaan' in Vedas. So, where did this come from? In "Manu Smriti", there is mention of it as bright work ever done by the parents.

In Hindu culture, if you give away something, it is considered as the 'daata' (  who is giving away) gains virtue through it. Similarly, according to Manu, if anyone does 'Kanyadaan' it frees him/her from all sins even done in previous births. Through evolution, humans eventually accepted 'Manu Smriti' as a scripture. After that, the position of women changed a lot. To Manu, male guardianship is necessary for her being. So, the father is the guardian when she is unmarried, and after marriage, it is her husband who takes the responsibility.

During the wedding ceremony, the bride is considered the incarnation of Goddess Lakshmi, while the groom is a form of Lord Vishnu. So this wedding ceremony is initiating the union of two Gods. Hindu marriages are all about mythology, and this 'giving away the daughter' ritual is passed down from many generations before.

The ritual of 'Kanyadaan' takes place after exchanging the garlands. The father takes the right hand of the bride and puts it onto the groom's right hand. And then the mother of the bride pours milk or holy water on the palm. This entire ritual is followed, by the 'Kanyadaan' mantras by the priest. This method varies from community to community. But the deep-rooted symbolism and the essence remain the same for all.

This 'kanyadaan' ritual also signifies that the parents of the bride are accepting the groom as their son-in-law, it also means to request the groom to acknowledge their daughter as his wife. This ritual is considered the emotional one as the parents give away their most prized possession. It is also said to be the greatest gift of all given by the parents to the groom.

Times are changing now. We have entered an era where women are no more seen, as the "Second Sex". Many people have their own opinions against 'Kanyadaan' nowadays. As per the feminists, it is sheer objectifying of women. Though sticking to their beliefs, religious people often say it is not about objectifying women instead, it gives the lady and their parents more value. To them, it is the colossal transition of a woman's life, from a daughter to a wife.

To liberal feminists, women are now equal in every field, from securing their education to other rights. Their roles have changed tremendously. Household chores, child-rearing are no longer their only duties. They are getting educated, contributing to family finances, taking care of their parents, and so forth. And to the radicals, 'Kanyadaan' is nothing else but just objectification and patriarchy to be the roots of every evil. This ritual has no practical purpose but a firm, moral and emotional element.

A year ago, a Bengali film was launched, "Brahma Jaanen Gopon Kommoti" (Brahma Knows the secret), casting Ritabhari Chakrabarty as a female protagonist. Where the "Kanyadaan" has been condemned, saying a woman can never be a 'thing' to donate. We can see how the protagonist in her childhood asks her father about the real meaning of 'Kanyadaan'. In reply, her father condemns this ritual saying whatever is substandard should be given up and, he also takes her oath not to utter 'Kanyadaan' mantras in her life.

Not only in films, but we have also experienced such incidents in real life. Where a father straight up refused to do the custom regarding 'Kanyadaan.' It was reported that the wedding ceremony, was led by female priests. During the ceremony, the father of the bride was called for 'Kanyadaan,' and he refused to do the ritual saying "my daughter is not an object to be given away." His strong take did not only challenged the patriarchy but also a progressive example. This news went viral. The netizens could not believe that such an incredible incident could happen in India.

Giving away the bride is also a practice among Christians. Here the father hands over her daughter along with her responsibilities to the groom. According to some people, adult girls are also supposed to make their own decisions, and it is not on the father to make the decision. Times have changed, and why not the 'old' customs? Hindu culture is not filled with such traditions, rather this culture is rich enough to attract those people who belong to a different religion. We have experienced many such instances, and it is reported that Russians are adopting Hindu cultures rapidly. But everything has its pros and cons. Most of the people condemn 'Kanyadaan' focusing on the empowerment of women.

Wow...what an article.. Kanyadan is a ritual being followed since many many generations in hinduism.Doing away with it won't be possible. However, hats off to that father who refused to this custom stating that his daughter is not an object. Moreover, I don't understand this logic. Groom taking responsibility of his wife is something old fashioned now. As women are financially independent today, their husbands also want their wives to contribute in house expenses and support their husbands financially. So today, women are actually earning, managing their homes, kids and husbands too. In a way, Wife take the responsibility of her husbands. So, this Kanyadaan should converted into Vardaan actually.😂(Var - Groom). Can we hope, with changing times, we can change such customs, traditions & expectations which asks for all the sacrifices from women, from leaving their father's house after marriage to leaving their jobs after child.

I really like the idea behind the article, especially the transition from ancient to modern times. You have given due consideration to rituals while maintaining the concept behind 'kanyadaan'.